London's got many looks, moving forward with the times during a phase that questions the make-up of London historic Docklands. Delving further into the Docklands I wanted to see how the everyday folk and professionals operate side by side. Staying in love with a certain city I saw a new side to Limehouse that I previously didn't know existed! Yes, I'll get to Poplar! Call the? 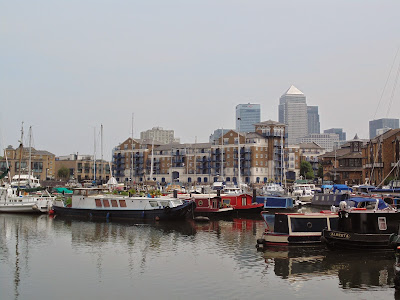 London's Limehouse Basin hasn't always been a swish canal-side address! Limehouse worked its waters back in the earlier years of London's busy industrious past. Receiving vessels from Scandinavia, America, Belgium and other far out posts, the work was hard but that that's how London's Docklands made its money! From 1820 to 1969 there was a whole lot of coal and ice being processed through this southern terminus of our grand canal network. This E14 waterfront is connected by the Docklands Light Railway its not difficult to be a city slicker! The former Docksmen literally worked their fingers to the bone, there wasn't modern machinery for those working men around Limehouse's former powerhouse. Oh, they worked it! Nowadays, the money is made from the heights of the many towering glass fronted skyscrapers at Canary Wharf, the suits wouldn't like to that former Docklands way of life. No L!

Those converted storehouses may now be hot property for those with the budget but remove that notion for a moment, the Medland and Bergen Wharves welcomed large shipments of fruit, timber and ice. The Limehouse Basin was a distribution centre for London, spreading the wealth across the city to their respected addresses. Colder than ice those frozen shipments were packed off to the fishmongers, ice cream parlours and butchers of London and quite possibly beyond. Sipping their speciality Starbucks Coffee and negotiating a business deal of another kind, the pro's of Canary Wharf operate from their futuristic offices to carry on the Docklands knack of enterprising. The Docklands got a new groove in the 1980's, transforming those forgotten storehouses into luxury apartments that boasted convenient marina views. I wouldn't mind sitting one of those balconies with a strong drink as the lights flash from Canary Wharf! Limehouse's Basin impressed me so! 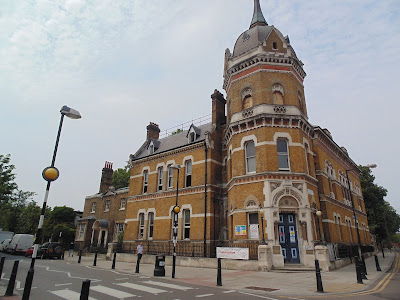 Westferry DLR Station passed by, I wasn't having contractions but I wanted to 'Call The Midwife' when I saw the signs for Poplar! My sights were set upon the former residence of the midwives from Nonnatus House, to be honest the majority of Poplar served Tower Halmets Realness with the abundance of council flats but I'm not going to judge the Poplar that stood before that June afternoon. Depicting a Poplar from the 1950's the midwives of Nonnatus House worked to serve the expectant mothers of E14, delivering up to one hundred babies per week. After seeing the latest series of  'Call The Midwife' in late 2014 I had to see what was left of Poplar's baby boom! Home to many seamen and immigrants from the rapid expansion of London's port I recognised a certain modern Islamic flare present in Poplar during my visit. Have the towels and tea ready, Poplar needs to 'Call The Midwife!' Those babies B!

Hold that gas and air! Poplar stood under the umbrella that was Canary Wharf as it overshadowed the low lying council projects that now exist. Those banking corporations rule the skyline around that London Docklands region, leaving the marinas of Limehouse Basin in the distance I looked up from an ordinary Poplar street with a state of confusion for the HSBC's didn't match the grey council flats! The ways of midwifery may well have changed within the streets of the East End of London it was easier to imagine then what Poplar might have looked like in the 1950's along Woodstock Terrace with the aged look from the Victorian terraces. Poplar's Recreation Ground had a sense of calm about it, considering the number crunching centre of Canary Wharf being on the doorstep! The ways of delivering babies probably hasn't changed a whole lot but the nuns of Nonnatus House made their contribution to the mothers and babies during Poplars past! Yes, I want the gas! 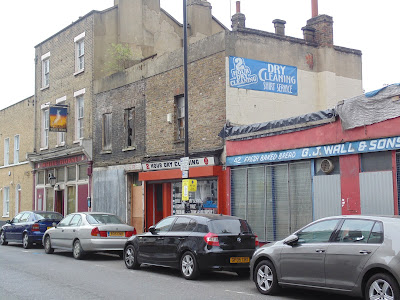 One moment, E14! London's Chinatown began its day around the streets of Limehouse, East London. Those Shanghai sailors called London home not long after dropping their ships anchor along the banks of London's busy Docklands. Limehouse served some serious Chinatown Overness from the 1880's to the later 19th century before London's Chinese community up-sticks Westwards to Soho. Comprised of Oriental supermarkets, gambling dens and restaurants there's not much left of London's former Chinatown. Washing the suds away from those epic Chinese sea crossings its believed yesterdays Chinatown boasted many launderettes or washing houses, instilling the strong Chinese work ethic that was instilled by the earliest Chinese settlers to London. Ming Street and Canton Street both bore names that resonate the most likely Chinese fit for Limehouse. London's East End has many secrets to share!

Seeking the unconventionally appealing I admired the stories that Limehouse shared with me, I appreciated it all! London's Docklands will keep on changing far off into the future but we'll always have the same past to recollect and be proud of. From the busy Limehouse Basin, trading a manner of raw materials that powered London in many ways. Utilising those former storehouses as redeveloped high-end apartments may have been a controversial decision but they possess an expensive view for certain! Certain shades of Canary Wharf need to be thrown, those bankers live a life that those Poplar council estate tenants don't but I'm not going to be too judgmental! Keep the gas and air on hold because the former midwives from Nonnatus House helped the women of Poplar's past, bringing babies into an ever-changing city! Soho wasn't the original London Chinatown! Limehouse takes the gold! I'll have no airing of any dirty laundry because that's really shady!