D.R.A.G? William Shakespeare wrote that acronym because drag has been going since the beginning of time! From Priscilla Queen of the Desert to the runways of RuPaul's Drag Race, I will bow to the queens forever more! Let's keep it sickening, lip-syncing for our lives and beating that face for the gods! Life may be a drag sometimes but we've just got to get into it! Okurr? Yes! 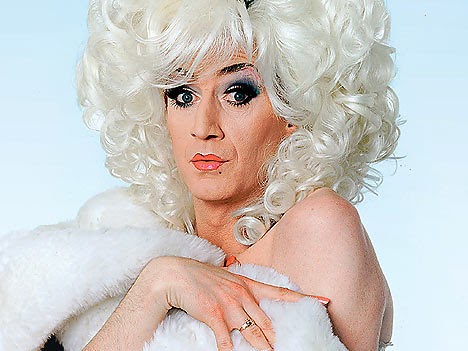 Queen, I knew from the very start I was all about drag when I saw Ms. Lily Savage do her thing on the BBC. Her show on the BBC had me straight away with her Scouse tone, I was like 'Mom that baby must be called 'Lewis 'Lily Savage' Harrison!' She bargained at Lewis because I was too fabulous for my own good! Lewis didn't get those middle names that I was promised but he's cool enough! Blankety Blank didn't mean much to me because that Shanghai Lil's ivory frizz was on point, never-mind that cheque book and pen show! I was completely captivated by Lily's leopard print fashion! Her razor sharp tongue commanded a roaring rate of applause, she was so unapologetic! If that was my first viewing of drag then I'm glad it was Ms. Lily Savage! Yes, she will always be a true Scouse legend! I visited the city of Liverpool in October 2011, seeking the sight of Ms. Lily Savage, I didn't see that icon after I crossed the Mersey over to The Wirral. What are you gegging on about? Lily Savage will always be a drag staple for me. Thank you, Lil!

Lil' didn't lip-sync for her life, she was a comedienne and a proud insult queen with a sickening sense of humour and a script that would always slay! London's RVT hosted Lily's primary performances, she was a social worker don't you know? Boasting the Beatles and Cilla Black it's true to say that Lily Savage brought the drama from the other side of the Mersey River. After watching back the Lily Savage Show and Blankety Blank on YouTube and the outtakes I now understand why I was so adamant for my unborn brother to be called Lewis 'Lily Savage' Harrison, some things never change! If I ever go into the field I hope that my wit and sass is half as outrageous compared to Ms. Lily Savage's! Will Lily ever make another comeback? Paul O'Grady calls the shots nowadays. Let me fast forward into the future, from 90s Lily to present day drag comedy, I will introduce a new kind of queen who's a little bit like Lily Savage. Yes, Bianca Del Rio reminds me of a present day insult comic, with a nod to Lily. I'll help you pack? 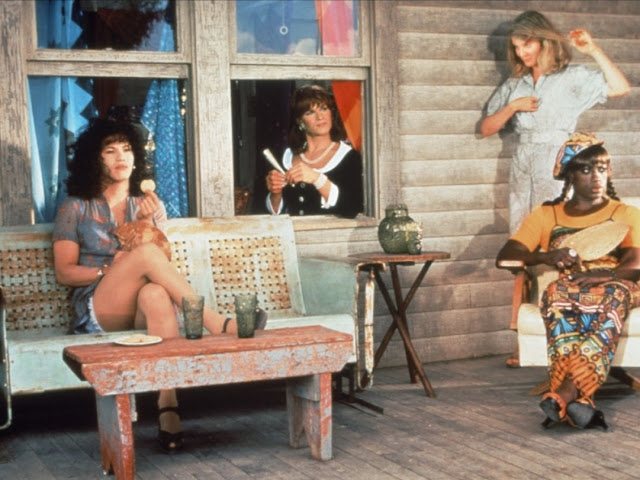 Before talent shows and social media were the done thing, I saw two of the campiest films in my life so far! Yes, those movies were that fabulous! Both To Foo Wong Thanks For Everything, Julie Newmar and Priscilla Queen of The Desert have a special place in my heart, both sets of courageous queens made one long crazy journey to then finish with style. Featuring Patrick Swayze as Vida Boheme and Wesley Snipes as Noxeema Jackson, along with their Latino boy in a dress they travelled cross country en-route to Los Angeles for that special event, not making any allowances for their thought-provoking pit-stop in the middle of nowhere! A car? Mary, Alice, Louise that vehicle those queens chose didn't get them to the city of stars in one piece! It had to be style over substance for those queens, darling! Showing that every boy starts his drag journey as a mere 'Drag Princess' or whatever Noxie said? Err Rupaul started that engine up? The shade of it all! Who was wear that Confederate flag dress? She was watching that pageant!

Going down under it was the turn of Priscilla to serve Queen of the Desert Realness for another epic journey beckoned! Felicia, Mitzy and Bernardette indifferently made their way across the vastness of Australia from Sydney, NSW to Alice Springs, NT on a pink coach who went by the name of 'Priscilla!' Giving everything they had got, those three queens weren't greeted with glitter and gratitude! No, those haters read that Australian trio to filth! Mitzy revealed that she had a secret son, battling her demons she climbed that Northern Territory rock in full drag! I must have been twelve or thirteen when I was saw this colourful film, I look back and I'm so glad it was part of my early teenage years! After turning up a bit of Tina Turner with a group of Aboriginals the three drag performers slayed the final number over the movie, finally it happened to me! Serving three shades of Australian Realness, I have to say that Felicia and her sisters brought the party! Yes, she's a jolly good fellow! Yes, drag is breaking down boundaries! 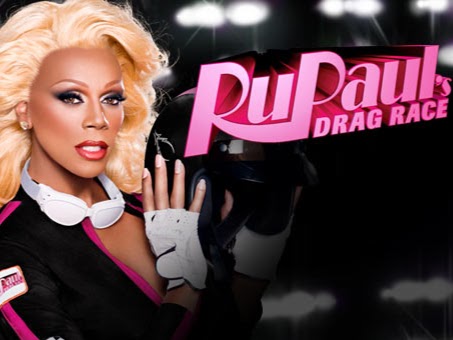 The debut season of RuPaul's Drag Race came into my life in 2011, that was two years after the original US premiere. Fronted by legendary Drag icon RuPaul Andre Charles, this revolutionary show set out to find 'America's Next Drag Superstar!' With much trepidation I had to wait a little longer to see what the queens were doing to win the 'Race!' The first season originally aired over in the USA during 2009 on LOGO TV, it was a groundbreaking moment for mainstream reality television! Nine contestants were featured over the nine episode run, each queen came from a different background with their own attitude. RuPaul gave us the love and positivity that we didn't know we needed, that first series radiated a light! Tammie Brown brought her own kooky energy and quirkiness! Showing us that we are all MAC Viva Glam worthy, Ongina brought us all to tears! Jade Sotomayor brought the dance moves! Shannel served her Vegas tricks! Originally hailing from Cameroon, Bebe Zahara Benet became the first queen to snatch the crown! Werk!
Following the earth-shatteringly positive response to the 1st season of RuPaul's Drag Race, a second season followed soon after the crowing of Bebe Zahara Benet! The second season of the 'Race' featured queens such as Shangela and Jessica Wild. Also known as 'The Post-Modern Pimp Hoe', Shangela was brought back in the 3rd season because RuPaul knew she had more to showcase! Over the years certain rising stars have caught my eye such as Jinkx Monsoon and Sharon Needles for their daring and different qualities, I'm on their team! Willam Belli personifies everything for me, she got disqualified but made damn sure she never made any Ru-Pologies for her misdemeanours! Being large and in-charge, Latrice Royale taught the children to be sickening and to let those bitches have it! Miss Latrice Royale, I adore your spirit! Showing us that streets can really be our runways whilst serving 'Hot Couture', I'll always root for Manila Luzon! That Filipina's certainly got style! The 'Race' shows no signs of slowing down! No, no, no! 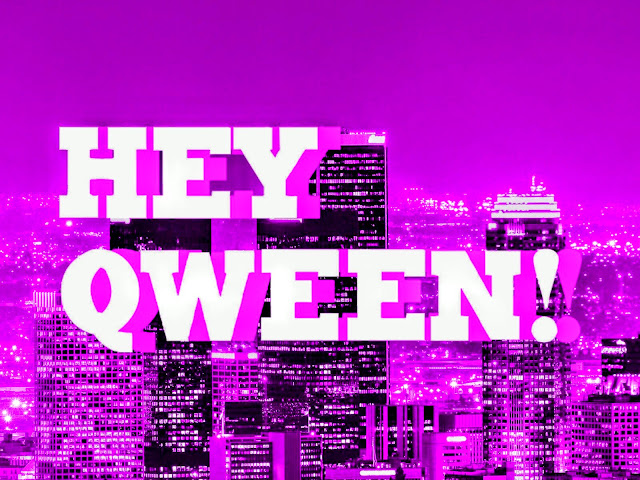 Keeping within American 'Drag Culture', I just can't get enough of a web series known as 'Hey Qween!' Hosted by Jonny McGovern and his gorgeous sidekick Lady Red Couture, each episode gives me life! Jonny and Lady Red simply make it look like they're having 'kiking' with friends! Resembling the format of a 'late night chat show', this YouTube spectacle allows the queens from seasons present and past to spill the 'tea!' 'Michelle Visage' appeared on this fabulous show before her 2015 Celebrity Big Brother appearance, expressing that we're all people at the end of the day! 'Visage' also stated that being our best selves should be something to celebrate everyday! I'm all about spilling the tea and throwing some serious shade! 'Jonny McGovern' always knows how to get his guests saying all the right things. Give them some more liquor! In recent years Hey Qween has become a right of passage for queens to be featured on. Community figures, 'Jodie Harsh' and 'Candis Cayne' have both made appearances. Oh I see you, Hey Qww!
Filled with the campiest of introductions, Hey Qween would have me living because Lady Red Couture made her snack known to the viewing audience. With segments such as; 'Look at Huh', each queen would have their chance to throw some 'shade' or spill some 'tea' at or about the queen that would feature on Jonny's screen! Countless Ru-Girls have said what they've been thinking all along, the truth really came out when Willam appeared on the show! Queens who haven't been on the 'Race' have been welcomed to sit on 'Jonny's' sequin and sparkling sofa, the wider impact of 'D.R.A.G' has seen many members of the community featured on the show. Lady Red and 'Jonny' always make those Ru Girls feel comfortable with a cocktail or two, ensuring they're feeling comfortable enough to reveal all of that BTS gossip from their season on the 'Race!' From 90s BBC television to feature films, Drag is fast becoming something of a cultural staple! From 'To Wong Foo' and 'Priscilla', there's something for us all to enjoy! That's my truth!

Do You Know What I Mean?