If only for one night each year we see Europe come together, Vienna brought the power for the 60th Eurovision Song Contest! Drag sensation Conchita Wurst returned after her triumphant victory to present from the green room, finding time to sing a song or two. Vienna, Austria set the stage alight with the mantra of 'Building Bridges' that would last the test of time! Ich Liebe! 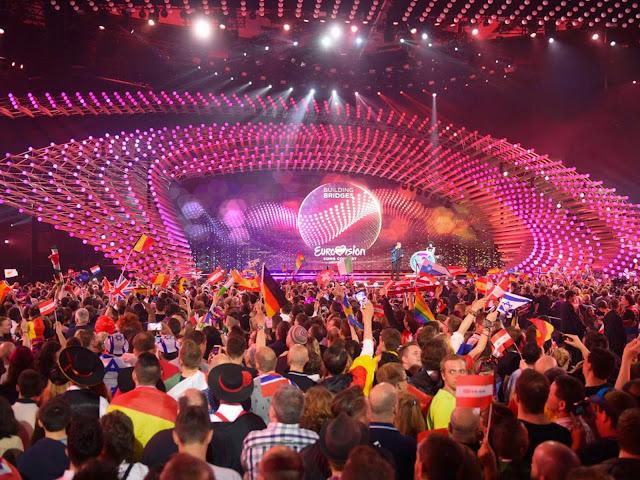 Finding one rhythm divine, Conchita Wurst rose from beneath the stage to greet us graciously opening the contest. Building a bridge until it reaches across the border the main three judges joined the previous Eurovision winner in song, also proclaiming the beginning of the show. Ascending into the audience of Vienna's Wiener Stadthalle Conchita joined her fellow judges in song to a rapturous crowd of Eurovision goers! Welcoming the twenty seven nations to the stage the arena blew up with pure Eurovision mania, beckoning a movement of a different contest compared to previous years. Let's just say the term 'gimmick' was fashioned into a refined way in Vienna that May evening in 2015. Who would be the favourite? Had dear Conchita's mission of promoting solidarity, to battle the discrimination that faces the Gay community on a worldwide level, fighting the issue of Gay rights in Russia? Yes, Queen! I had not watched the ESC in 2014, but after 2013s Finnish Lesbian kiss, Turkey's been gone ever since! Come on through, Vienna!

Ironically, the Wien Stadthalle was alive with the sound of music! The Von Trapp family were replaced with the sounds of the ORF Radio Symphonie-orchester Wien, could Maria ever of built a bridge as expansive as Vienna was promising to carry peace, love and understanding? Returning from the shadows were Serbia and Cyprus in the final as the Czech Republic didn't make it through the final stages. I have been an avid Eurovision fan since Sertab Erener snatched the trophy for Turkey in Riga, Latvia during 2003! So, after Conchita's game changing victory in 2014, I was more than ready for more craziness and truly Eurovision moments in 2015! I was looking forward to seeing Russia, their a nation that are causing much heartache for the Gay community, but thanks to Conchita Wurst's activism work! I wanted to see change! Australia, you say?! Yes, for the 60th edition of Eurovision a wildcard nation was chosen to participate, also the show was first broadcast in China! Now, let's get on with the show Austria! 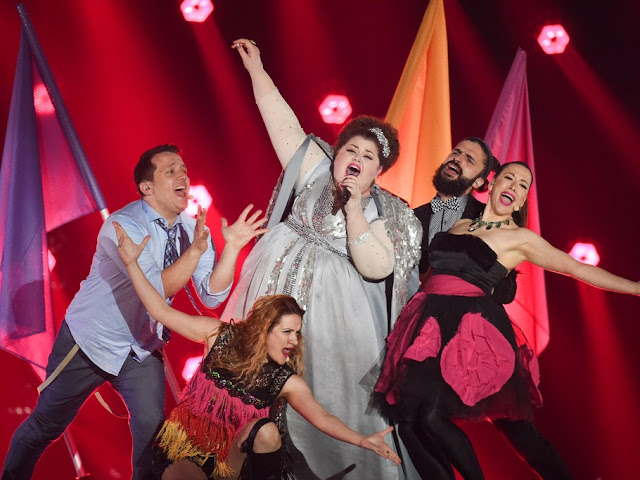 Slovenia, who? Those headphones just weren't doing it for me, honey! I wouldn't forget France's deep and meaningful performance by Lisa Angell, non Je N'oubliez Pas! If someone breaks your heart then the best advice came from Israel, their 'Golden Boy' took his pain down to the dance-floor! Nadav Guedj turned up the early lull with a mash of modern R&B with a twist of Arabesque Realness! I was feeling Israel's Middle Eastern groove a little bit too much, I was intrigued by the promised charms of Tel Aviv! Yes! Each country had a very Austrian video introduction that made me fall in love with Vienna! I'd love to visit one day! Estonia's duo looked less than impressed with the contest, their faces really didn't show it! Lighten up! Skipping to Armenia for a quick second I didn't like the song but their 'Game of Thrones' get up impressed me much. I was in love with Lithuania for their 'lovely' song served one Gay, Lesbian and Hetero kiss! Lithuania served nothing but love! 2014 had lost me, I'm back ESC! I am, Wien!

Featuring ninth in the contest a formidable looking lady took to the stage, Bojana Stamenov commanded her audience with her captivating lyrics to show that 'Beauty Never Lies!' Showcasing her curves she sang 'Finally I can say, Yes I'm different and it's OK!' Embodying freedom and fearlessness Bojana had my heart and secured my ultimate favourite entry of the night! It's no secret that the Eurovision Song Contest is popular with Gay men, so our Serbian sister Bojana served to the Gay gods who were watch from up above! Napping through Norway, Cyprus and Romania I was awoken by Guy Sebastian from Australia who represented his far off nation with a certain swagger! Belgium brought the beat with 'Rhythm Inside' by Loïc Nottet, that Belgian beauty should have made New Zealand singer Lorde quack in her boots! Nottet served something fabulous indeed! Could the country known for its meatballs and flat-pack furniture strike a second victory in three years? Yes V, I'm going to get to Russia soon enough! 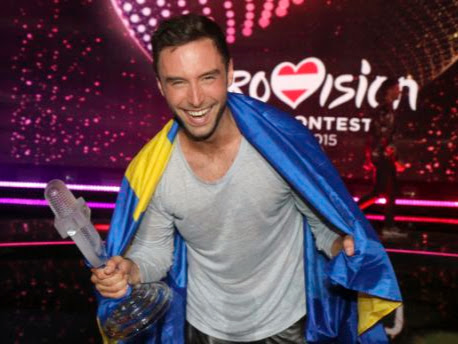 Aminata injected some love into the second throw of entries during the final representing Latvia, supposedly she was serving Sia but her powerful performance did her nation justice! She was actually amazing! Poland's entry proved that the Eurovision Song Contest is accessible for disabled artists compared to anyone else. Greece's Elena Kyriakou channeled some Greek Mariah Overness with 'One Last Breath' hopefully she wasn't referring to the economy of a specific Grecian nation? Russia's Polina Gagarina was greeted with a torrent of boo's as she tried to promote a feeling love and unity for the people of our continent, I have nothing against her personally but who was Russia kidding to make us think they have changed their stance on Gay rights? No, we didn't accept their white flag! Were we excepted to fall for her dress that was fashioned to be a symbol of 'world peace?' I'm sorry to say... Go sit down with your questionable views and practices! I mentioned before, Turkey couldn't accept Finland's 2013 Lesbian kiss!

Spain broke the dawn with a sultry and sexy assault on our senses, Edurne had my 'corazon' from the very beginning! Commanding the stage with her blood red matador like cloak she revealed a slinky number that didn't leave much to the imagination! Amanecer se rompió! Hungary took a political edge on their song but I was still reeling from Russia's attempt at solidarity, Boggie was no Miss World! How many times do I need to say? Georgia's Nina Sublatti fought with her 'Warrior' Overness that she served that night! The half time performance took shape in the form of a percussion based spectacle that I appreciated but loved Conchita's performance too much to care! A winner had to be announced in time, Måns Zelmerlöw proved that we are the 'Heroes' of our time but we dance with the demons in our minds! That dance tune resonated a 'Swedish House Mafia' like beat as he scored 365 points to bring Eurovision pride back to Sweden after 2012s euphoric victory in 2012! Oh, another Smörgåsbord? Maybe?