Birmingham is a destination like no other! It's a city that doesn't receive the praise its entitled, neither the funding to take it to the next level! I try to get back to Birmingham as much as I can, one can never have too much of a good thing! I wanted my day to be refined for some reason? Birmingham gave me my sanity back that day I know that for sure! Represent Queen Brummie! 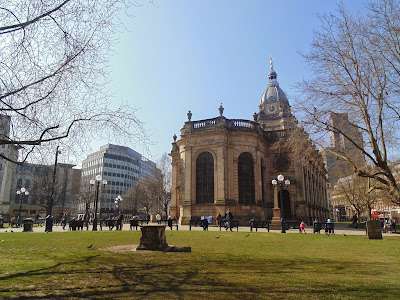 I never really appreciated Birmingham whilst I was living there during my time studying but each visit back to my region's capital I take something new in! As per usual I had things to do, with the dullness done I headed for Birmingham's Cathedral to see if I could track down some divine intervention because I was feeling the heat that week. Like a prayer I did find a pocket of calm in my life, even if it was for a brief second. Celebrating its 300th birthday this pint-sized house of worship served Jesus Christ realness! Bless yourself, then genuflect! Nestled within the glass fronted Colmore Row Business District this house of worship has witnessed some serious change since it served this once progressive West Midland town, it was much smaller! 1715 didn't know what change this cathedral would witness, I didn't pay much attention to this cathedral during my student days back when I would take the metro. Life's a........!

Birmingham, you say?! This destination stands in the shadow of others like London and Manchester, both places are great but Birmingham has the art of reinvention down to a fine key! Throw your shade but I know Birmingham will be getting into a whole new groove in the coming years! Crisp the weather may have been I wasn't looking for anything to dampen my unplanned Brummie pursuit. A part of me wanted a cheeky pint and a full English breakfast but I ignored that hunger pang for another time, breaking from the usual is what I did that day. Swinging by Victoria Square and the Council House I noticed that Birmingham's former Central Library was looking towards a new 'Paradise' that reinforced how much my life has been altered, I wouldn't mind going to 'Paradise!' Keeping my head in the game I traded my down demeanour for an outlook of optimism, Brum had one more chance to serve greatness! What the heck is 'Jesus Christ Realness?' Heaven help me! Yes, choose Brum! 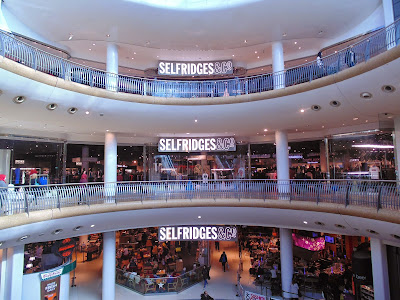 Shopping isn't one of my favourite things to do but I broke that chain of thought whilst I was last in Birmingham. I'm a firm believer that the Bullring isn't Birmingham's main selling point because their are greater things that represent Birmingham! Channeling my inner 'Material Girl' I took a chance on Selfridges, I had just been paid so I wanted to flash some plastic fantastic. Paperchase knows my pin code, I could spend obscene amounts of money at that premium stationery outlet in Brum. Diamonds and pearls always look alluring but I had my eye on a new cherry red notebook for my notes at work. Primark's concession caught my eye on the men's clothing floor, I'm a skinflint when it comes to money so grabbing a £7.00 black and gold tee suited me just fine! I've got to look sickening the next time I hit the clubs of Southside! Birmingham is a fashion phenomenon! BHX isn't the only runway in Brum! I was ready B!

Leaving the 'Hot Couture' behind, it had to be 'Operation Southside' for my obligatory Hong Kong style bubble tea from Caffe Chino. It's a ritual I always make sure that I execute whenever I visit Birmingham, it's more a flashback to my university days when me and my friend Kelly would ignore our studies for a moment for a slice of something sweet and a bubble tea for two. Kelly now being in Hong Kong the distance doesn't seem so gargantuan when I enjoy my bubble tea! Rod Roj on Smallbrook Queensway had my full attention, I had heard a few positive reviews about the food served so I wanted some of that good Turkish cooking! Dining on a delicious serving of chicken and lamb shish that was served with rice, salad and bread like any self-respecting Turkish meal should be formed. Ayran was in my life for the first time in a long while! Could Southside be the new Turkish Quarter?! I might not live in Birmingham anymore but there's somethings that won't ever leave me! Get it Birmz! 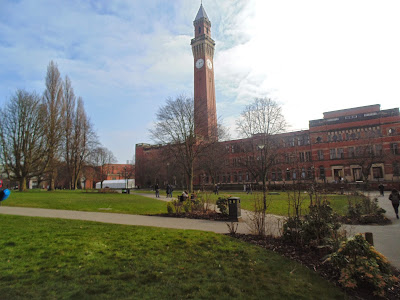 University College Birmingham provided me with the tools to achieve my university dream but I wanted to see how the other half study. Making it to the grounds of the University of Birmingham didn't take much thought, I was looking for the Joseph Chamberlain Memorial Clock Tower, for that ticking landmark embodies Birmingham's most prestigious educational institute! The students that passed me by were potentially training to be doctors or other respected professions so a certain type of stereotype was brewing. Not my path, never and no! I loved the clock tower and the grounds that made up the Chancellor's Court reminded me of my time spent in Havard near Boston, USA. Their was a cool vibe beneath the clock tower, it was weird seeing all the students because I've been quite hung up about not having university as a part of my life anymore! Quite frankly I need to get a grip! A Brummie university that's right on time B!

The University of Birmingham campus and halls of residence played a part in my university journey even though I studied at UCB. I remember going to one of the halls of residences for a fireworks display during the first semester of my first year of uni in Birmingham. Rounding off the experience now after my graduation to see 'Old Joe' felt like the right thing to do. My halls of residence 'The Maltings' were located on the Mailbox's doorstep so I was within a five minute walk of the city centre if I speed walked, looking at the main campus at UOB I gathered a few amenities were on campus to make things more convenient for the students. I preferred being in the thick of it for nights out were so much easier to execute, rather than being a train ride from the centre of town I wouldn't like being away from it all at UOB. 'Old Joe's' clock tower impressed me much and I saw the other side! Who knew that I would be serving 'Educational Realness?' Birmingham is a destination with much more! Work it B! 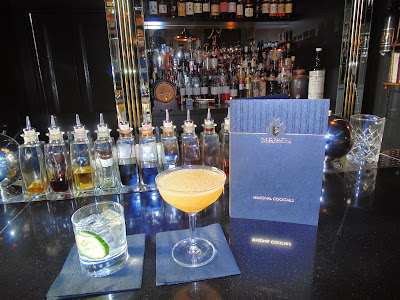 Going walkabout was just what I needed to do, I feel stress very easy so lets just say I needed to be distracted for a little while! Making my way from Chancellor's Court I chose the canal to get my head around the last couple of months, my short canal-side stroll got my head back into the game. Leaving Edgbaston behind I had my sights set on Harborne Village to seek a more refined Birmingham. Eventually, I made it across to Harborne but wasn't overly impressed by the parade of shops really, I was looking something that was more quaint! The houses behind the main parade of shops exuded a small town feel, on the outskirts of Birmingham I probably didn't do badly? Getting it together I stepped closer to Birmingham's city centre for time was pressing on, having only one day off I didn't have the chance to extend my Brum escapade. Yes, I traded that mid-morning pint that I wanted, a posh cocktail was needed! It was!

After being followed on Twitter by a boutique hotel in Edgbaston I thought it would of been rude not sample a drink or two from the menu! Retracing my steps from the Hagley Road I made it to The Edgbaston Hotel, a six bedroom luxury Art Deco hotel. Taking a place at the bar I was informed about one gin cocktail that sounded superior to me, I chose the 'Bees Knees' which tasted like a heavenly melody with a honey based after taste. Not feeling completely satisfied and making up for the amount of walking I had just done I treated myself to a 'Santa Muerte' that set my brief experience of The Edgbaston Hotel perfectly! I would love to stay that that stylish hotel because it had something special about it! Passing back through Broad Street I made my final pit-stop at one of the bars at BrindleyPlace to see my brother Lewis whilst he was on shift, I had a few pints of cider before making the decision to return back home. Birmingham has my heart, its my destination! OK, B I'm done!