Have you heard of the Mayflower? I had the chance to have a pint or two in Rotherhithe, South East London where I learnt a thing or two about that famous British sailing vessel. What's Surrey Quays? Trading the West for something a little bit more East I got to know a side of London I wanted to revisit. Who knew Deptford served a healthy serving of Ho Chi Minh City? 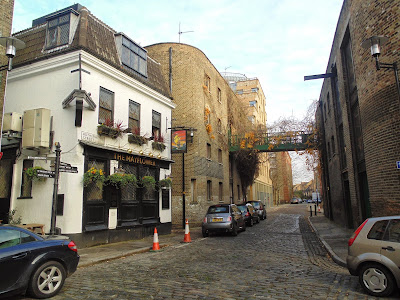 Rewinding back the hands of time to Saxon London led me to Rotherhithe. Deriving from the Saxon terms for Rothra, a marnier or oarsman, and Hythe being a 'landing space'. Early Rotherhithe dates back as far as 1282, when its believed that Rotherhithe was a small village upon the gravel of the famous Thames River. Having previously gone on a pub crawl with my parents and younger brother I had the chance to see the winding cobbled lanes of Rotherhithe. Trusting the Thames Path from Tower Bridge I really got the mix of 18th century brickwork buildings with the new skyline bringing the 21st century into the frame. I wouldn't mind calling one of the flats home because the area seemed so quiet and out of the hustle and bustle that London is infamous for. When in London it's key to make the best of the Thames Path to see places such as Rotherhithe. Truthfully, parental pub crawls can be very educational, L!

Once a bustling water way the River Thames was the lifeblood of London with vessels transporting goods from as far back as Roman times to the maiden voyage of the Mayflower. Once named 'The Shippe' that London pub now goes by the name of 'The Mayflower' making a key reference to the famous United States bound vessel. Leaving Rotherhithe in 1620 the Mayflower docked at Southampton before crossing the Altantic Ocean to New England referring to it as 'The New World'. It's mental to think that the Mayflower left Rotherhithe 156 years before American Independence was declared on the 4th of July 1776! Contrary to belief London's docks were littered with pubs that acted as the meeting point for the crew, I guess those sailors would have a skinful before setting sail? The ships captain was buried in the graveyard of St. Mary's Church across from that famous public house in 1621. Yes, Rotherhithe helped the founding 'Pilgrim Fathers' reach the 'New World since 1620! Ha USA! 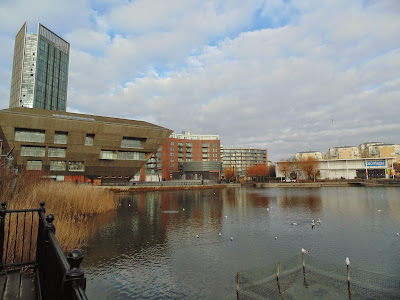 Not wanting to stand around doing nothing, London's Surrey Quays called me next on my continued day of discovery in SE16. Surrey surely doesn't sound very London? Fear not, I did some research to learn that the Surrey Commercial Docks met the border with Surrey and Kent before London had broadened its city walls. Shopping for the usual can be such a drama so when I'm in town I stay away from Central London to favour the shops and amenities at Surrey Quays. Connected with a London Overground station and Tube link its a well connected corner of South East London. After a lengthy absence from the area I had to take a seconds glance to realise I had passed through Canada Water London Underground station when I was about eleven years old during a visit to the city. You know I never miss a beat! Maybe with just a touch of love a new meaning can be brought to a former industrial site? Yes, London I see things clearly now!

Time never stands still in London! Canada Water, previously known as Canada Dock dealt with the vast majority of incoming vessels that had sailed from the former British ruled Dominion of Canada. Captured above its evident to see the ships haven't called at Canada Water in a long while, nor will they ever call again. Now home to the a sprawl of swish apartments and a library this phase of Rotherhithe's gentrification doesn't look damaging at all! That wasn't a question! The freshwater lake that overlooks Canada Water and Surrey Quays Shopping Centre gives a feeling of calm, it's not difficult to catch a glimpse of the towering Shard skyscraper towards Bermondsey. Compiling all the elements from yesterday and today its an area possessing a crazy urban mix that serves maritime Overness! Walking from the cobbled lanes of Rotherhithe Village to the modernity of Canada Water took me through an ordinary looking council estate with an edge, an intriguing mix of designs. Serve this up, L! 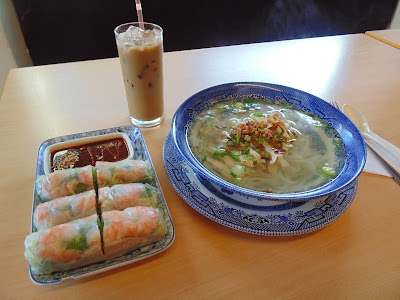 I'm not one to cross when I'm hungry so I pin-pointed where seemed the best place to grab some lunch. Taking in the urban craze of Surrey Quays Lower Road with high street and independent retailers that hustled their grind, I appreciate that honest view as I left the SE16 London postcode area. I had half a clue where I was heading, one thing I knew was that I wanted some good Vietnamese cooking in my life! Deptford presented Mama Pho Cafe to me just at the moment when I thought I was going the wrong way, like I ever get lost! Never! Ordering a Chicken Pho Noodle Bowl and some Prawn Rolls with peanut sauce, my dining selection took me back to New York City's Chinatown for a brief moment. I couldn't get enough of the Iced Vietnamese Coffee! You already know that my South East London day just got a lot tastier! Let's face the facts, I know my Vietnamese food well, call me Miss Saigon! I missed Chinatown NYC!

Feeling stuffed I took to the streets to make my way back to Bermondsey, some things go but from where I was walking Rotherhithe looked gold to me. London is my secret project in many ways, I know there's so much more than Queen Elizabeth's Westminster residence. I don't need to prove anything but I want to reinvent my view of London. From the sailings of 'The Mayflower' from the docks of Rotherhithe to the 'New World' I know that trusting the Thames Path was a wise choice to make. The docks of Canada Water no longer deals with shipments from the Canadian nation but a new wave of life has grew from within, acting as a beneficial asset for SE16 with connections to serve the city of London. Seriously, how did 'The Mayflower' make its maiden voyage from a developing and strong port to a new frontier that wouldn't have its independence for another 156 years? With Rotherhithe and Surrey Quays done, I want to take another chance on Deptford. All in good time. Yes, LDN!