On The Borderline... Gibraltar!

Worshiping the Queen I wanted to stay close to the crown, I choose the British Overseas Territory of Gibraltar for my short holiday. Endorsing the Rock I craved the taste of British food on Spain's doorstep, did I not mention there's a Morrison's in Gib? British since 1704, Gibraltar has some typically British sights but retains a certain something that keeps its individuality. 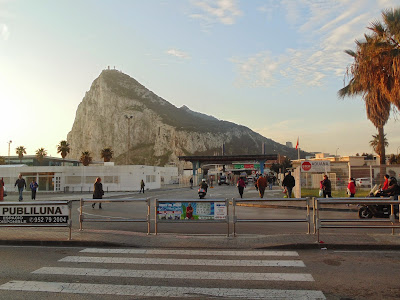 Standing on the Frontier from Spain I had to take a moment or two to take in the magnificent Rock of Gibraltar, standing before me with the flags of two nations fluttering in the morning's sky. I had wanted to visit this Mediterranean British Overseas Territory for a while so I bit that bullet! I woke early with a mission to see what Gib had to show me, I wanted nothing less than Overseas British Realness! Showing my British passport secured me entrance into somewhere closer to home compared to Spain, thankfully the runway was shut because that's the road that took me closer to the Rock! I was tripping on the fact I was walking across a live runway surrounded by busy commuters who were making their way over from the Spanish Mainland for work. I have seen many sights but the Rock of Gibraltar stopped me still. From standing in Spain no longer than five minutes earlier to seeing a red phone-box! Gib!

From the winding Calle's of La Linea I was faced with a barrage of council flats that made me feel right at home, minus the Rock and the temperate climbs I could of been in the West Midlands. Winston Churchill Avenue told me that this slice of Blighty was going to serve pure regality from the Motherland. Quoting what I had previously seen on Channel 5's documentary that featured Gibraltar I recognised several things as I made my first impressions of Gib. Would I be going to the top of the Rock? No, I like to keep my feet on the ground providing I'm not on-board an aircraft. With the Rock looking down over me and the rest of Gibraltar I knew I had to see as much of this endearing territory! Those council flats baffled me, I could live in a residence like the Gibraltarian's do. My Monarch Airlines flight had only landed the other morning but I wanted to build the hype, thinking about it was almost like I hadn't boarded that flight! Honestly, Gibraltar I really want to know your secret! 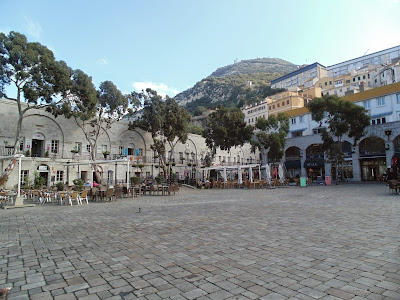 I didn't have a plan for my time in Gibraltar, after making my way over the border I unknowingly headed towards Grand Casemates Square to piece together another reference from that Channel 5 documentary. Formerly known as 'La Esplanada' before the Treaty of Utrecht was signed. Given that it was before 09:00 am the bars and restaurants were just opening but I could only imagine the excitement and energy the walled square would usually serve. The British vibe of Gibraltar could be felt everywhere as I made my way closer to Main Street. Honestly, it was completely bizarre to think that I was practically in Britain. I would be lying to say that I was expecting to see something else but it was such a bizarre mash of contrasts I was speechless. Spain had recently celebrated the Epiphany so I drank my body weight in beer so I wasn't feeling good, that wasn't going to stop me seeing Casemates Square. Go!

I needed a Full English Breakfast to replenish my sources because I didn't fancy my chances of getting a Desayuno Completo over the border in Spain! Choosing the Gibraltar Arms for my breakfast worked like a treat, trusting the 'Early Starter' with a cup of English tea I was laughing! The British brands surfaced as I walked along Main Street from Grand Casemates Square so the bizarre notion carried on furthermore. Marks & Spencer served Royal Britannia with its quintessential range of UK based products, was I in some state of euphoria? If I was in any need of a herbal remedy I could have relied on Holland and Barrett to cure me better. I had been clever to take half Pound Sterling and half Euros so I had a hassle free trip, lets just say my British currency came in handy when I needed it the most! I won't lie I did see some Moorish and Spanish influence in the architecture but the colonial British vibe stayed stronger! Gibraltar, I haste to say you've got an identity crisis! Damn right, G! 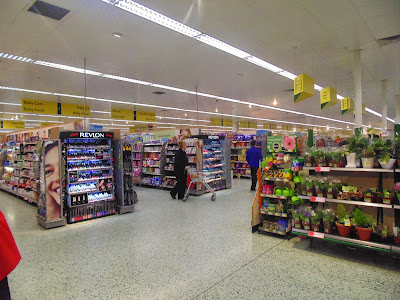 Call me crazy but I had to make some purchases in the Morrison's in Gibraltar, I'm not sure If I was more excited to see that supermarket than the Rock? I'm mad! I made two trips to Gibraltars main supermarket, I managed to get bits and bobs that I couldn't find in Spain but If I'm honest I purposely waited for most of it when I got to Morrison's. Everything looked the same as my local store in Bilston so I was in awe of that ordinary looking supermarket. Serving Gibraltar since 1994 the British superstore is surrounded by a huge estate of what looked like council flats, sounds like a home away from home to me? I forgot to mention that I didn't go near the Upper Rock for two reasons, I don't have a head for heights and the cable car was closed for maintenance. the simple things I saw in Gib complemented my dual-country trip. I'm putting my name down for a council flat in Gibraltar!

I must confess that the Gibraltarian's had a crazy chat going on, was it Spanish or English that they're suppose to speak?! It all became clear that a dialect known as 'Llanito' sets the conversation on the streets with a mix of many influences due to Gib's colourful past. I listened in my amazement because their 'Llanito' cut mid-sentence from Spanish to something like 'I'm on my way to pick the kids up'. So I stayed in Spain for cost reasons but if money was no object I would have made reservations on the Sunborn, an exclusive vessel that's docked in the Marina within the Ocean Village development. I don't think I'll get my head around walking over the runway to reach the two nations but like the many quirks that I saw over my trip this British Overseas Territory follows the beat of its own drum! From the Rock to the winding colonial streets I adored Gibraltar's military facade, there may be politics with the Spanish but I'm proud to say Gibraltar has affiliation with the British Crown!