Shadwell looked good to me, there's too many people talking down Tower Hamlets! For that reason, I wanted to visit one part of that London borough. I'm tired of people telling me that I shouldn't visit communities that supposedly have bad reputation's because I'm all about finding realness! Shadwell showed me that London's East End deserves a little respect! What's good E1? 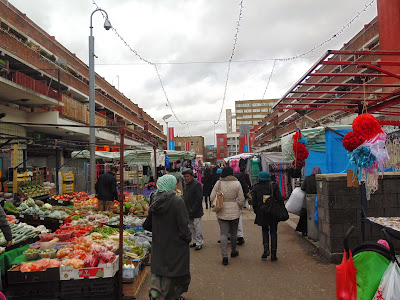 There's no doubt in my mind that London is a city that's rich with cultural diversity that's infused with a strong sense knowing itself. Shadwell caught my eyes for many reasons, its Bangladeshi and Pakistani community took me to the heart of London's East End. I had previously been to E2 but wanted to trust the London Borough of Tower Hamlets to prove the haters wrong! Watney Market served Halal Couture for certain due to the majority of the women in the streets donned their Hijabs or Burkhas. The market stalls were simple, selling fruit and vegetables and textiles only an Arabian fashion house would approve of. London for me isn't about the Queen or the Houses of Parliament because that's much too predictable for me. Shadwell showed nothing but honesty with its council estate high rise developments that painted my desired expectation! Ditch your tourist maps and take a chance on E1! I did that!

The produce that was on sale at Watney Market looked just fine, it was a typical East London hangout for the people of E1 who went about their business. If truth be told I didn't see an awful lot of Christmas decorations around the streets of Shadwell and at Watney Market, for that reason my inner Scrooge was very pleased about the Islamic presence. Just over the road the bordering neighbourhood of Wapping stood with its developed Tobacco Dock and warehouse apartments but I didn't want to partake in that business because I was all up in Shadwell's Halal realness. Put that in your pipe Wapping and smoke that on your Tobacco Dock! I'm learning to respect London because she might not be a predictable city, she's sure got some interesting quirks that set this English capital aside from the rest. You could say that Shadwell mirrors the likes of Leicester or Bradford? I've not been to those Muslim infused areas so that's not up for discussion! Watney Market deserves respect! Go E1! 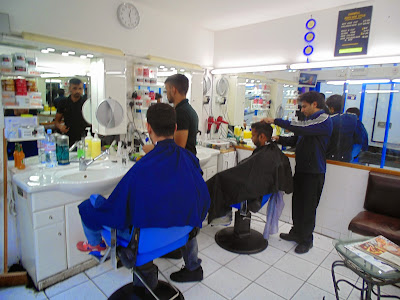 I needed a touch up on my latest hair do, but I wasn't going to spend my pennies in Bilston! Shadwell being an Islamic area of London meant that it had an abundance of no-nonsense barbershops on each street corner. I made my way from Watney Market to Shadwell's vibrant town centre where it meets with Cable Street. Choosing Shadwell Gent's Hair Stylist because I know these types of Barbers always make the right cut! I waited patiently for my turn in the chair watching some dodgy Bollywood music videos so I was very grateful for my turn in the chair. My side style was sorted and I even made some small talk with the barber who cut my hair. Amazingly enough I only paid £7.00 for my hair cut, for London prices that's a criminally cheap cut! It had clicked that the men in the community take a pride in their appearance for all the Barbershops were strictly for guys, so move over ladies! You've got to make the chop, now!

Staying connected in London is no laughing matter, so it's handy that Shadwell has both a Docklands Light Railway station and a London Overground station connecting with the City and the former Olympic Park. I ditched the public transport that freezing December day, walking over Tower Bridge and bearing a right at Tower Hill it didn't take me too long to reach the Halal end of London's East. Back to the street! I know that the Islamic faith forbids the consumption of Alcohol so I was confused when I saw two pub like buildings, both fooling me for a split second to think that they were functioning pubs! Those suspicious pubs ended up to be a fried chicken shop and the other a convenience store. I recognised that those Muslim ladies take their devotion to Halal Couture like no other! I don't think Shadwell could be gentrified, its current community will keep it Halal for a while longer. Regeneration seems to be the potion for Shadwell, just don't go overdosing! London is changing! 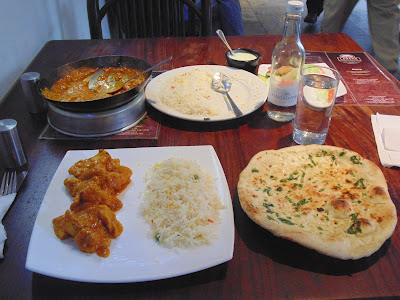 I was hungry! The Lahore Kebab House looked like the right place to have a late lunch. Taking my seat I could hear the busy chatter of several London office types, they all sounded in good spirits seen as a it would be Christmas in the following days. My table sat next to the kitchen, I peered through the glass to see a busy kitchen that looked scorching hot! I didn't know what to order so I took a leap of faith by trusting the waiters recommendation of the Karachi Chicken. My Karachi Chicken looked just like a Chicken Tikka Masala but had more of a fiery kick! The blend between sweet and spicy made my taste buds conflict with each bite of my curry, it was fulfilling for sure! My meal consisted of my curry, pilau rice and a garlic naan bread. Honestly, for Kebabs and Curry's I was simply spoiled for choice in Shadwell! Do I really have the knack for finding nice places to eat? You can be the judge of that! I loved my food!
Shadwell allowed me to pursue a new side of London, well new from my point of view. London might be a rich man's game but I found a corner of East London that's just getting by in the best way they know. Watney Market serves realness, its simple intent to serve the community of Shadwell was conveyed to me effortlessly. I'm learning to get my camera out in areas that aren't so Halal, I believe I got some good snaps for this East London blog. Shadwell isn't the most flashiest part of London, that's why I was intrigued to visit to see how a normal part of the city operates. I got my side style cropped at a simple and cheaply priced Barbershop, by that experience the only way to go is East! Going hungry in Shadwell is a damn crime so get your Kebab or Curry game on! I'm understanding that East London has a difference vibe within each of its postcodes. Shadwell surprised me good that December day, I saw all I wanted and that's the end of that! Shukran Shadwell! S, I'll keep on moving!