Back To The Beginning... Perivale, Southall & Ealing, London!

Where do I begin? Upon my previous visit to London I revisited the place where I grew up to the age of five. Going back to Ealing in London had to be done, it was like tiding a cupboard that's been avoided for some time so I felt the need to get the task completed. Let's just say it was a day that I won't forget for a while! Did it feel strange to go back to the beginning? It was strange! 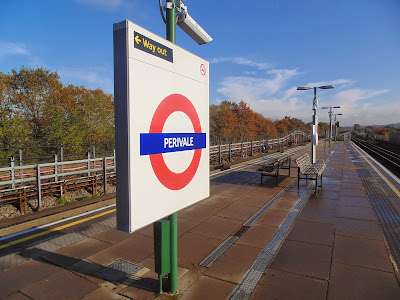 Catching the London Underground to Perivale didn't take much thought but as soon as the Tube had left the tunnel it was apparent I was almost back onto home turf, a place I hadn't been for at least nineteen years. I wanted to make the trip back to the place I grew up for many reasons, I don't feel the are right to share that now. It's my drama! Born on the 14th of November 1990 I grew up in Perivale, West London until I moved up to the West Midlands when I was around five or six years old, I was half hoping things would  not of changed in the surrounding area. To my delight nothing much had changed as me and my mum exited the Tube station. Seeing the larger suburban homes from the Tube station started to bring slight memories of my early childhood back. The weirdness hadn't kicked in at that moment. It's mad to think I have lived in Bilston for over eighteen years so returning back to Perivale felt really strange!

So out of the Tube we made our way through a park that I spent a lot of time as a young boy, I had to take a few minutes to take in the sight because I knew it registered a memory of some sort. That park saw some drama from when I was three years old, I was playing on the climbing frames with one of my aunties when I broke my arm for the first time. It was bizarre to think that the same climbing frame was remaining, I suppose it wasn't that long ago? It took me back to a time when I remembered going to nursery and reception, early childhood memories that I look back on fondly. I know deep down why we had to leave but like I said that's classified information! Bilston got me thinking mad, I appreciated being back in that scene for the short time we passed through. People always say to me that I sound too posh to be from Bilston, I just say oh I'm serving you my telephone voice. Maybe I'll go back one day? Let's all go back to the beginning! UB6, I found you Perivale! Yes! 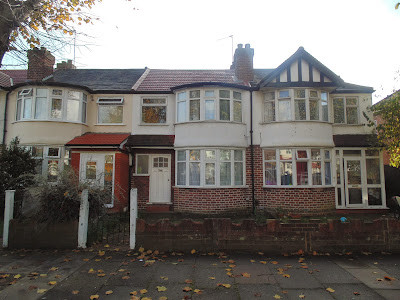 We've all got that first home you sort of remember if you haven't lived there for a while? If you still live in your childhood home I'll try not to throw you evils! Tees Avenue was literally where it all began. It was crazy mad when my mum said we had made it to the street where we once lived. I do have memories of going to and from reception school and spending long summer days playing in the garden with my friend Barney. If I'm honest its like a delayed reaction thinking about these things. Life gets crazy so we all have to make our movements onto our next thing, I'm grateful for those fond memories but whatever really. So much time has gone past I connected certain emotions with my former childhood home but not enough for me to want a tour around to see if the kitchen look the same, it was good to go back. Life takes us in many different directions but it's funny that we always go back to the start. It felt right!

Some spend the afternoon at Madame Tussaud's with the waxworks or take a stroll down London's Thames Path but I was all about reconnecting with yesterday. Cards on the table I would say I'm from the West Midlands with a twist, its been my home for so much longer than Perivale but I always have that UB6 town printed in my Passport. Since moving from Tees Avenue me any my brother went back a few times but then life decided we wouldn't return until I choose my West London day of reflection. What would life have been like I still lived there? Would my job prospects be better being by the City of London? I need to take this towards a different avenue! Leaving the street behind us it was a shock to the parade of shops look so down-trodden and out-dated when I remembered them how to be when I was a boy. Do you have somewhere to return to? I say go go! Tees Avenue was part of my past so I'm going to leave it. We went forwards without a second glance. No mistakes, UB6! 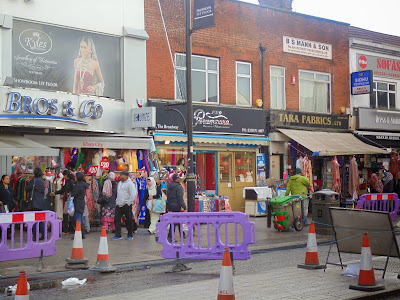 Adding some Eastern promise to our day of discovery me and my mum took the E5 bus towards Southall Toplocks estate. Southall Broadway looked good to us, if you didn't know Southall is a diverse neighbourhood with a large Asian population from the Indian Subcontinent. You know I'm all about that International hype! I'm a sucker for some Indian food so I bought two veggie samosas to munch on. I loved the vibe of Southall's bustling high street with its abundance of sari fashion stores and curry houses. Leaving a spicy meal for another day I bought five pounds worth of Indian sweets because I love that Besan muchly! Southall is about ten minutes away from London Heathrow Airport so if I ever work at the airport I shall be looking for a flat to rent in that part of town! Our time in Southall mixed things up, for seeing those ghosts wasn't as cute as I thought it would have been. It was a life lesson to go back to the start.

I couldn't get any closer to the beginning than see the hospital I was born at! Passing through on the bus to Ealing Broadway we saw the Ealing General Hospital and I even caught a glimpse of the maternity wing. It was strange to not remember somewhere when you know you were there once before, I definitely underestimated the day because it was down right crazy to see Perivale, Southall and Ealing once again after such a long time. I don't remember much from Ealing but it wasn't really Polish when I lived there, I suppose that European Union is the cause of that? So, it's true that London means a lot more to me than I thought and I can identify why I strive to find interesting and alternative corners of London that are away from the central tourist traps. On a deeper level I recognise that I can enter the next phase of my life with the knowledge that I know the area where it all began. Thank you Perivale, Southall and Ealing for taking me back to the very start. That's it, I'm done!