The Next Stop... Oxford, England!

Sign me up for a day in Oxford! I wanted to see how the other half study! I was quite awestruck because it was a regal university city. Home to the oldest university in the English speaking world the University of Oxford surely stands above the competition! Unknowingly, Oxford's grand libraries and institutions showed me a few Harry Potter filming locations. Yes, Oxford! 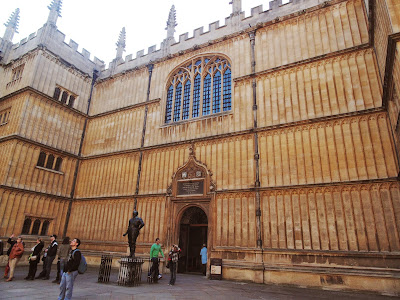 Like my usual pre-trip routine I didn't do much research for my day in Oxford but I found the Bodleian Library to check out. Rocking down to Oxford from Wolverhampton didn't take too long so I made it to the library within enough time to book up a tour. Might I say Oxford, you look amazing for a medieval city! I prefer to visit places that have an element of danger but Oxford's regal flare impressed me much! A students paradise? Only if you have the money for it honey! Back to Bodleian, returning for my tour that afternoon I was ready to catch a glimpse at the bookshelves of yesterday. First opened to scholars in 1602 this vintage house of books could only be accessed if one had a masters degree! I was astounded because I've only got a undergraduate degree but that was in the 1600's. Religion affected this aged library, precious materials were destroyed by King Edward VI in 1550. The shade of it all!

Photography was strictly prohibited in the upper library to my dismay but I took knowledge from the tour, we have a history to be immensely proud of in England so let us teach and prosper from it. Every cloud has a silver lining, investing financially was Sir Thomas Bodley who had been an informant for Queen Elizabeth I. Mr. T wanted so badly to help the library recover from its trouble. Replenishing the books and materials and working towards a larger extended space of learning. Under new rules the books weren't permitted to leave the library, even royalty were denied to take books from the Bodleian Library. I didn't do much academic reading whilst at university but the stature of the Bodleian Library would put the pride back into the books. Do, I need that masters degree? Housing sculptures, manuscripts and much more this Oxford library is a wealth of knowledge. Talk's cheap but the oldest relic, an Egyptian marriage certificate dates back 2,000 years! Big up, house of books! 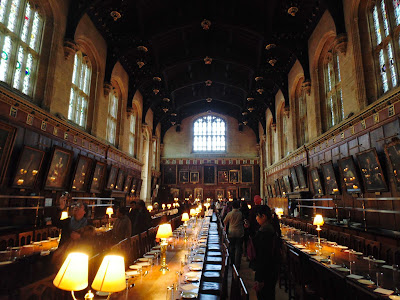 Who said Harry Potter? From the Bodleian Library I checked out Christ Church College and Cathedral to find myself in the Great Hall that was featured in the Harry Potter films. Opened in 1546 this college has been teaching Oxford's elite since the break of light, something told me that you would need some serious student funds to pay the tuition fees at Christ Church. To have your own Cathedral at uni? That's crazy Oxford! Without a shadow of a doubt the feel of the Great Hall and main courtyard had a feeling that wouldn't have suited me whilst I was a university student. Don't get me wrong it was out of this world but I was born with no silver spoon! Essentially, Christ Church sets the tone for Oxford due to its remarkable architecture but give me back the Maltings. Take what you want from Christ Church, it is quite bizarre to think I've seen the Great Hall from Harry Potter up close and personal. Yes Oxford!

Making my way around Oxford I felt a quintessentially English feeling with the bicycles passing through the city centre roads it really didn't feel like a conventional city. Famous for its university and colleges this South-Eastern city of education has taught some of the greats including Oscar Wilde and JRR Tolkien. I suppose great people deserve exceptional universities? Away from the universities and colleges of Oxford I adored the  the open green spaces of the Christ Church Meadow,  it effortlessly merged with the winding streets of the city. Choosing to have a pub lunch for my dinner I didn't waste any time for I only had a few hours in Oxford to see as much as possible. An international honey pot? Yes, like London and Cambridge I saw hundreds of tourists who had a foreign nationality so that could have explained the appeal of this middle class study mecca? Correction, I haven't been to Cambridge yet but in the stakes of the original university cities I had to use it as a prime example.Yes, OX! 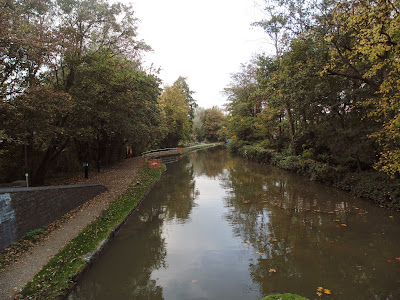 Did some mention punting? I didn't think so! I stumbled across the quieter side of the River Thames quite soon after my train arrived in Oxford. Being on a budget I wasn't looking to spend a whole lot because I just don't have it right now. Anyhow, I returned to the canal towpath to round off my day of discovery and historical education to be met with a serene setting that felt faraway from the tourists. After stumbling upon a sign that I saw by one the main canal bridges I learnt that Oxford benefited from the canals, being located close to the beginnings of the River Thames may have helped trade be navigated to London easier. Weather wise Oxford had served some warm temperatures with no rain, a rare sight for the October weather we've experienced so far in the West Midlands. Canal or no canal it was lovely to take a quiet stroll past the narrow-boats, if truth be told it was a nice way to end the day. Bye, OX!

If you are ever short for somewhere to visit, I suggest you trust in Oxford because no one wants to be stuck in a bad circumstance. I have expressed my allegiance to my working class upbringing due to the feel of Oxford's exclusive student price tag and visual being but I'm not a hater one bit. I didn't marry the night but the afternoon I spent in Oxford showed me the wonder of a library and the lengths people would go to educate themselves. The sheer passion for a place that Sir Thomas Bodley had for Oxford to invest and empower the aptly named Bodleian Library. I am no longer a university student but I saw how the other half study within the confines of Christ Church, yes you would need more than mommy and daddy's allowance to fund that champagne lifestyle! Oh the shade! I have been saved a visit to the Warner Brothers Harry Potter tour because I saw two filming locations that day in Oxford. So, it goes without saying, thank you very much for educating Mr. Oscar Wilde!