Wolverhampton, come on!  Have some pride! Like a phoenix rising from the flames, it's been a long road but out of the ash came a celebration for Wolverhampton's LGBT community. Wolves Pride 2014 being in its third year put its best foot forward, showcasing a worthy day of entertainment, reflection and empowerment. Wolverhampton didn't throw any shade for once! 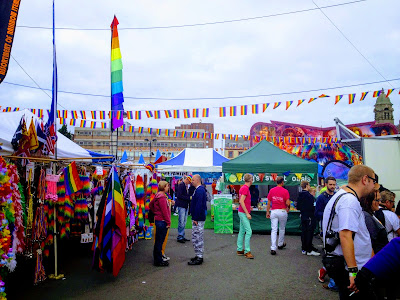 With the Pride summer calendar coming to a close it was time for Wolverhampton to bring the best that it could! Wolves Pride was first unleashed on this West Midlands city in 2012, so I wasn't going to judge. It is staggering to think that the whole value of Gay Pride has been transformed into an almighty cash cow, but let me finish! Set up in all of its rainbow design the Community Stalls brought a sense of simplicity to the LGBT focused event, can you see what I'm trying to express? Ranging from information from the University of Wolverhampton, advice stalls from the Terrance Higgins Trust right through to the sweet treats of 'Sally's Sweet Oasis' a mix bag of local faces served the event with a pride. My most recent Pride was back in May 2014 in Birmingham, a Pride weekend that's been going for seventeen years! I looked at Wolves Pride from a neutral view, keeping an open mind was essential. Truth be told, it was a Wolves first! Unfortunately, 2014 was not going to bring NYC Pride to me like 2012! I took notice of Wolves!

I thought I knew Wolverhampton before the 27th of September 2014 but something had changed. In one way I was at peace with Wolverhampton but always I had remember that Pride comes in different forms around the world. Wolves Pride 2014 made me realise that it's OK to be from Wolverhampton? Thankfully, there was a trusty burger van within the Community Stalls area, I was hungry! Whatever is said about the Black Country it's been a tough road for our communities due to the recession, but we all love a bit of rainbow power even if you can't admit it! My university days might be over but it was great to see the Birmingham LGBT network present at their respected stall, I promise to stay away from the Birmingham Pride hype. Was it your first Wolves Pride? I had been in contact with Martha Bishop, the Manager of LGBT Network Wolverhampton to see about publishing a blog about the event. It was an opportunity throughout a time of change, finishing uni with an abrupt return. It was an experience for sure! 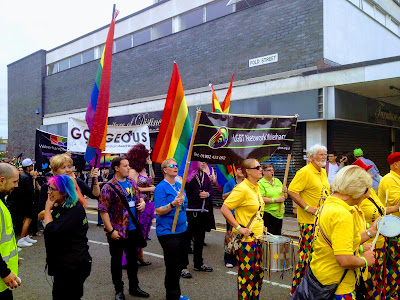 The clock struck 1pm, initiating the beginning of the Wolves Pride 2014 March through the streets of Wolverhampton. Beginning from the Main Stage area in Fold Street around the city centre the procession made their way with some serious colour and vibrancy! Leading the way was the 'Someone At The Door' samba group, followed by LGBT Network Wolverhampton who are the driving force for LGBT awareness within Wolverhampton. Like any fabulous Pride March the famous rainbow flags fluttered proudly within the procession. Gorgeous Club showed their support for the cause as well as Wolverhampton Homes representing their division. The key part of the March was that everyone believed in the cause, raising the awareness of our modern day fight for equality. After my Dissertation I don't agree with the term 'LGBT' its a sweeping statement that categories a margin of society, I'd prefer not to be a letter! No, we aren't statistics! Sure, it was good to see a local sense of sponsorship. Wolverhampton deserves more!

The Pride March matched the progression of the event, in the third year Wolves Pride 2014 had an energy that gave the onlookers hope for the future impact of this Wolverhampton Pride event. It didn't cost the earth to be part of Wolves Pride, for only £5.00 I was able to contribute to the Wolverhampton's LGBT Network and have a great day and night. Many Pride events nowadays make the best of the 'Pink Pound' but I didn't get that feeling because you didn't have to be a scene queen to be a part of the hype on Fold Street. People do complain about parting with their cash to attend a community event but the origin of Pride hones back to the days of the 'L.G.S.M' where funds were collected through the hard work of the Lesbian and Gay activists during the Miner's Strike of the 1980's so bare in mind that its not all about the sparkle and camp or the booze because Pride always has a cause. Wolves Pride March served Wolverhampton realness, people marched proudly for the city! W, your March was endearing, it looked quite homegrown! 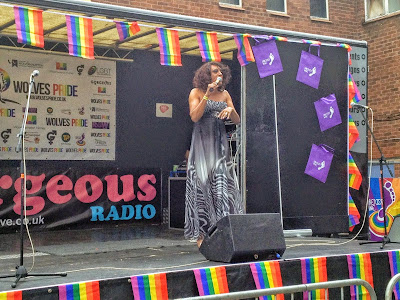 Come join the party! I had heard it through the grapevine that the Main Stage at Wolves Pride would be welcoming X-Factor's Lucy Spraggan to headline the event that very evening? Yes! Welcomed by important faces from Wolverhampton City Council, they opened the show. Local MPs spoke their words but I'm not one for politics. Wolves Pride had nerve, built from humble beginnings to now host a formidable Pride celebration, I was proud! No, I actually was! Packed to the brim with music acts from across the region it was a celebration! Drag duo Glitter Lips opened the festivities, I hadn't seen anything quite like it! Drag sensation Sandra graced the stage with her razor sharp sense of humour, damn you watershed! Local songstress Jenny Jones sang her heart out! Little Jack and Love Beats Riot worked it as well! Who needs pop royalty or a money hungry diva, Wolves stands above! How about another track Rose Redd? Another pint of Cider? I needed to down a few drinks to realise where I was, I challenged myself in a good way!

Vois smashed their set, boy they have some talent! Above all, I loved seeing the progressive acts because like the event they are all on a journey, fighting for the next level of their careers. Fresh from the Big Smoke had to be Baga Chipz, queen of the battered sausage who originally hails from the West Midlands! After seeing Baga on London Live's Drag Queens of London, I couldn't wait to see her candidly honest set at Wolves Pride! Baga performed her set wearing a scantly clad Union Jack top, she represented her region with a strong drink in hand! That's our girl Baga Chipz! What Pride was best? NYC, Birmingham or Wolverhampton? That's a really tough question because Wolves Pride served urban realness in its city centre location, I have to hold the torch for my home city to support a growing event that showed me a Bostin' day! Wolves Pride, I have faith and wish you every success for future projects. After the show the Bond Street Tavern complimented my day and night. Wolves has a Pride? Yes, it needs our support! It does!