Birmingham... Theatre Shows, The Back To Backs & Graduation!

I've been in a state of delusion, like I mentioned previously that my life is in transition well its moving forward! The previous chapter of my life has been written and closed firmly, ready for me to move on because it's been a strange couple of months. Good things do come to those who wait! Birmingham, let's get this clear because it's now time to say goodbye! Let's go, go Birmz! 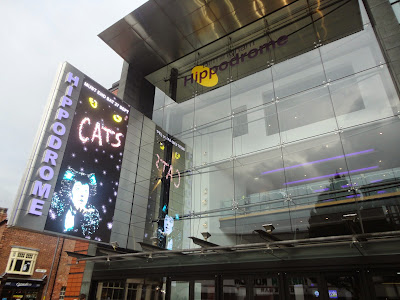 Birmingham called me back three final times this month, firstly to the Birmingham Hippodrome to see the hit musical Cats. I saw the ticket release date for the show and jumped at the chance, we have to treat ourselves once a while! I hadn't been out in Birmingham for a while so the theatre borrowed me some time back in the second city. Getting my Chinese food fix was quite underwhelming, not tarnishing all the restaurants in Birmingham's Chinatown but I've ate much better at the other restaurants, especially Dim Sum. I literally couldn't spend my money as I've been on the hunt for a new pair of trainers, I would be damned even if I tried harder! At least the pint of Cider I had at the Village Inn was nice, it brought back some memories of my Uni days but those nights are done! I suppose we should get back to the show? Would this touring show match my childhood West End experience? A memory?

Let me begin, I first saw Cats when I was about four years old in the West End so I had a high expectation because shows lose their edge when they tour. The iconic 'Jellicle Ball' theme song was dragged out for the first half of the show, I already knew the show lacked in dialogue so I took that into consideration. Grizabella, the glamour cat will always be my favourite member of the show but she didn't have the age that needs to be portrayed. I had the opportunity to see Elaine Page play the role of Grizabella, she wasn't that old but her rendition of 'Memory' was more than outstanding. The part of 'Rum Tum Tugger' the ladies tom cat was played the best along with 'Mr. Mistoffelees' so that impressed non the less. I half enjoyed the show, that emotion was shared with a fellow theatre-goer who agreed with me. I last saw 'Singin' In The Rain' at the Hippodrome in March 2014, it was a very good performance! With one curtain call its time to compose the next chapter! Birmingham, I'm waiting! 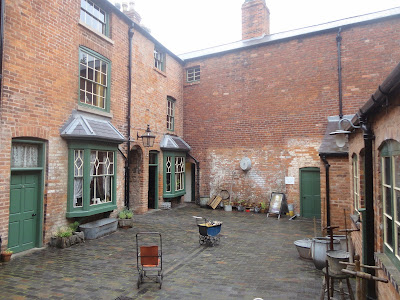 Throughout the years I spent in Birmingham as a University College student I never got to see the Back To Backs! Nestled deep in the heart of Birmingham's Southside stands the only remaining block of back to back terraces in Birmingham. For a small cost I was able to see the forgotten way that inner-city Brummie's lived through the 18th and 19th century's. Three restored houses stand with a thousand memories and stories that were told to me and my tour group by the knowledgeable tour guide. Ranging from 1830 to 1930 the three houses have been brought back by the National Trust, I had relatives who lived in a back to back terraces within the West Midlands. I never knew that Southside and Hurst Street was once a thriving Jewish community, boasting a Synagogue and Kosher bakeries. Only Block 15 remains today but its a must to witness the Back To Backs that have been reborn in Southside. Loved it!

Birmingham's Back To Backs aren't for the faint hearted, I even had a challenge navigating the stairs in the vintage housing project. I also learnt that in the 1960's the Back To Backs in Birmingham were condemned unfit to live in but Block 15 survived due to the existing businesses that once faced Hurst Street. I loved seeing something different within Southside, after all it was part of my night scene of nightclubs and bars throughout my University days. One of the couples in my tour had stopped in Birmingham to see the Back To Backs on their way home from the Cotswolds, I apologised on-behalf of the dreary weather because Birmingham didn't look at its best. Throughout the tour our tour guide showed us a photo of what Birmingham's Hippodrome theatre looked before its major revamp, I was saddened because it looked very grand with its eccentric brickwork. See something new or something borrowed at the National Trusts Birmingham Back To Backs! I do love you, Brum! 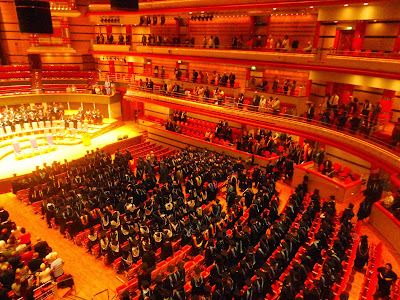 Now, Sissy That Graduate! On the twenty second day of September I donned my cap and gown at Birmingham's Symphony Hall. I graduated with honours, against all the adversity I faced as a school boy I got my hustle game on and achieved a 2:1 degree after completing my BA Hons Hospitality and Tourism Management course. University College Birmingham took me places that I never thought I would ever go! I worked at Walt Disney World in the summer of 2011 and I experienced one year out on placement in Newark, USA for Virgin Atlantic Airways. I didn't want to get a First Class Honours because I worked my hardest at uni and partied in Birmingham during my student life. I never planned to attend my graduation ceremony but it was such fabulous day, my cap and gown annoyed me but I won't forget strutting across the stage in front of an enthusiastic audience! I brought the house down, the house down B!

It was great to finally face the day, I tried my best to fast-track my degree because of securing a Chinese visa but I faced facts because it was something I couldn't control. Celebrating the event with some of my classmates was great, we've all change but it's been a while since we all embarked on the beginning of our course. Donning our cap and gowns we chatted about the good times, looked towards the future and compared the results of our degrees but most of all it was a great lasting memory. The last few months have been strange, I felt a sense of accomplishment as I made my way back to my seat with my degree in hand! People come and go and with each friendship remaining makes everything worthwhile, I know who'll be on my Christmas card list in the future. The next chapter has only just begun, I look forward to the next phase of my life and to embark on my Chinese year of discovery! Quote Rupaul's 'Sissy That Walk' to understand my opening word. I will get to work!

Birmingham... You've Still Got It!