Shrewsbury, England... Thanks For Everything!

When times get tough I feel like it's the perfect time to branch out, to introduce someplace new. Shrewsbury caught my eye and after a following on Twitter I just had to get out to see what this Shropshire town had to give. No stranger I did what I usually do, leaving my expectations at home I embraced Shrewsbury to the fullest! I wanted me some ramen noodles! Yes, Shrewsbury! 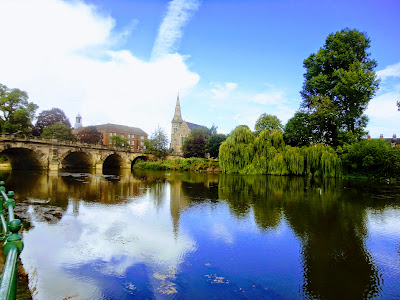 Why Shrewsbury? I said why not! I was beckoned to that Shropshire town to see what all the fuss was about! No fuss was found, I left Wolverhampton to arrive in Shrewsbury within the hour so nothing needed to be rushed. From the very moment I stepped onto the platform from my train in Shrewsbury I could feel that small town vibe, a town with history and tonnes of winding roads that gave me a break from the post-industrial town of Bilston. You know I still love you Bilo! Located close to the Welsh border it was easy to hear the slightness of a twang in the townspeople's talk, had I reached Wales? Greeted with the English Bridge I loved the view onto the Severn river. I've only ever heard about Shrewsbury through the news, when the rain falls the Severn river throws some serious shade on Shrewsbury! I left my expectations at home to find I was very impressed by the Tudor vibe that Shrewsbury served so well!

Shrewsbury Square served some kind of Morris Dancing folk show! That Saturday took me to somewhere else, a crowd was attracted to that spectacle for sure. Getting around Shrewsbury didn't take all day, centrally located from all the main amenities, it was no sweat to see everything in an afternoon. I knew it hadn't been long since I had visited Newcastle, somewhere new beckoned, staying closer to home Shrewsbury told me that miracles can happy every now and then. I might have enforced that I don't do shopping but Shrewsbury possesses a long run of niche boutiques that didn't have a Poundland price tag, SH was showcasing some real class! For a small town it stood strong with lots of independent retailers, we need to empower these mom and pop businesses! I thought I had seen it all but I had been fooled, check out Shrewsbury's High Street to soak up all the Tudor architecture, it was a blessing to see something different! I was getting hungry, that needed sorting! 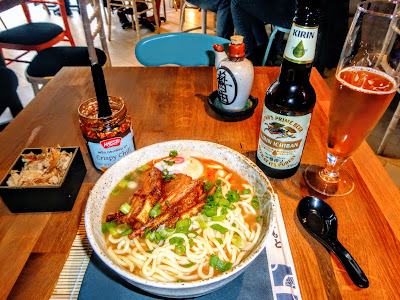 In hot pursuit for some Korean and Japanese fusion food I wanted my lunch already! Momo No Ki, the home of Ramen in Shrewsbury town. Twitter got me good, after a follow from an interesting looking eatery I didn't see why I couldn't have some of that good cooking! I ordered the signature dish, the Momo No Ki served up noodle bowl heaven with spice and substance. Bringing out all the colours and flavours from the Ramen goodness I could have been back in Chinatown, New York City! I didn't have to wait in line for I was served promptly by the friendly and professional team who worked the floor at Momo No Ki! Captured to the right stands my hearty serving, accompanied by a Kirin Japanese beer I dined on an international hype even though I was in the charming town of Shrewsbury. This experience has really made me pay more attention when I get an alert on Twitter, social media has a lot to answer for! Yes!

After the main event being my lunch I wanted to see more of Shrewsbury, looking towards the edge of town I found The Quarry, now a vast park space to enjoy I found a spot to take a break along the Severn River. Dubbed the 'Original One Off' I would have to agree with that tourism description of Shrewsbury, the relaxing pace of the town was infectious even with the busy pace of the Saturday afternoon that was in full swing. Need I forget to mention, Momo No Ki is located opposite the Abbey, so look for that once you cross the English Bridge from Shrewsbury's town centre. Get it together! Go get lost in Shrewsbury like I did, it made a nice change to for the day. Staying overnight can be done, I passed numerous centrally located hotels in the town centre so making that Shropshire stay can be easy. Another Twitter follow from The Buttermarket showed me that Shrewsbury has a lot going for itself even if its a small historic town! I kid you not, no shade Shrewsbury! No! 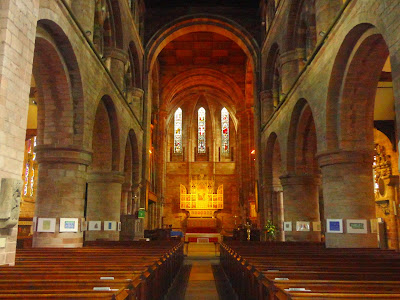 I'm not religious, but like a prayer I found myself taking a moment at Shrewsbury Abbey. I didn't receive any calling but I'm a sucker for a place of worship. Shrewsbury Abbey reminded me of the Church of the Holy Trinity in Stratford-Upon-Avon, the resting place of William Shakespeare. Like a prayer or maybe like a dream? With its earliest foundations dating back to Saxon times in 1070, the Abbey was most influential when it was used as a Benedictine Abbey in 1084. Something told me this Abbey had put in some serious years I guess life is a mystery? I noticed Shrewsbury had a cathedral but I just wasn't interested in that! Shrewsbury's Abbey gave me some peace and quiet so all was good. I didn't expect to find an Abbey that had so many years behind it, the engravings looked like Latin! 1070 might well be 944 years since Shrewsbury Abbey started, hope for another 944 years. I even paid one pound to take a photo! S, I was good!

I didn't know somewhere like Shrewsbury could be located so close to home!? I chose to keep Shrewsbury's Cathedral at arms length because Abbey served enough, this Shropshire town had all the qualities I had once seen in Chester! Another town that could have been scouted for Disney's UK Pavilion at the EPCOT World Showcase in Orlando? It really does beg the question?! I told you Shrewsbury had hidden depths, but why did the heavens have to open?! I mean the rain! Please believe it, Shrewsbury beholds a castle! On my way to the train station I knew there was something hidden reason for me to take the wrong turn, back in the early days Shrewsbury Castle ran the town to slay to protect the people. As well as the Castle the Regimental Museum stood within the forever royal grounds, who be dropping ammunition like Geronimo? My visit to Shrewsbury led many things, the Abbey gave me time to think and Momo's served me some おいしい food! That's 'delicious!'