Wolverhampton is rising, its had some tough blows but this West Midlands city is fighting back day by day. Negativity is a no for Desperately Seeking Adventure! I visited Wolverhampton's city centre to see how two independent businesses are working it for WV1. Keep posted for the third business because Wolves is definitely the comeback city. Big up WV1! Really? Let's wait and see. 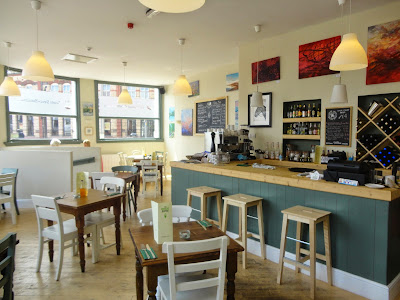 Hungry? Wolverhampton's newest eatery has something special to bring to turnaround this city. The Hungry Bistro has been serving up something different to Wolverhampton since December 2013. Part of the high street initiative piloted by Mary Portas, this Wolves bistro has been 'hungry' to attract a new crowd in the city. Located on Lichfield Street, this new wave bistro has a key location connecting its quirky menu with Wolverhampton's bus and train stations. Contrary to report Wolverhampton is England's busiest connector point for rail transport, why not take advantage of Wolves's Hungry Bistro during that time of transition? Haters are going to hate but my philosophy is to empower the people and places that serve up something special! Wolves lacks in premium venues, experiencing the services at the Hungry Bistro proved to be very positive! I had to pinch myself, was I still in Wolverhampton?! Wishing the bistro the best of luck, I genuinely hope business will be fruitful! Wolves doesn't have the best rep, It's not right!


Can you name something that makes Wolverhampton look at cut above the rest? The Hungry Bistro is located just over the road from Wolverhampton's Grand Theatre, the show must go on for both venues, its great to see a good bit of camaraderie! Why not choose the Hungry Bistro for some pre-theatre drinks? Ditch that Greggs or McDonald's for something freshly made at Wolverhampton's alternative cafe bistro, the burgers looked great! Multinational chains have their franchises, but let's not forget that those 'mom and pop' establishments actually care about their customers! Quench your thirst by choosing a speciality beer or a bottle of wine from the collection that's available at the Hungry Bistro? The team at the Hungry Bistro are friendly and welcoming so an attitude free dining experience can be enjoyed with a doubt. Challenge yourself by taking a chance on something new, we have to be part of the change for Wolverhampton if that means having a lovely lunch! C'mon Wolves, get those pies ready! You know what I mean? 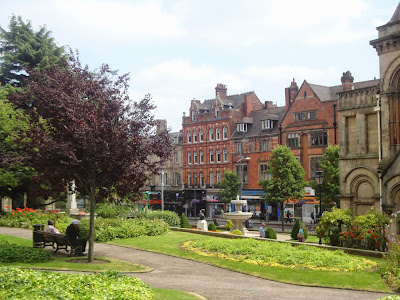 Wolverhampton's past has been colourful, famed for its 'Sunbeam' motorcars, I wonder if there was a female founder? Even in this day and age, who's name hasn't been forgotten? Sure, she's watching over us! Yes, Lady Wulfruna, a local noblewoman founded the settlement of Wolverhampton in 985 so she's been serving that realness for a long time indeed. Aside from that strong female this city has a great art gallery that still showcases some remarkable works of art, the council owned building still operates as usual considering the aggressive cuts. Choosing Wolverhampton's Art Gallery to find works of art dating back to the Georgian and Victorian periods and a whole section dedicated to to the city of Wolverhampton from 1850 to 1970. The art from the Wolverhampton section shows that Lady Wulfruna hasn't thrown much shade since she founded the city in 985! I have faith in Wolverhampton's art gallery, I felt a good vibe as I walked around the various exhibitions on offer. Lady Wulfruna, it's all love! Let's bring it back!

Call me controversial but I wanted to explore a council owned service in Wolverhampton to seek the development for tourism within the city. I'm a firm believer that there's a market for Wolverhampton and the surrounding West Midlands area, so with a marketing campaign it would be possible to bring some much needed revenue for Wolverhampton? I saw the art gallery in a positive light, its times like these when we have to use what we have got to the best of our ability. Get me on-board, Wolves would be become a tourism hotspot! I wonder if Lady W was an independent woman? If she was I guess the city of Wolverhampton should empower their city centre independent businesses in a second. Who knows? I don't! Veering back towards the art scene I really appreciated the Wolverhampton exhibition, I moved to the region since I was five years old so it nice to see what past influences have been brought through the medium of art at Wolverhampton's gallery. WV1 better work! But Wolverhampton, you really need to work! OK? 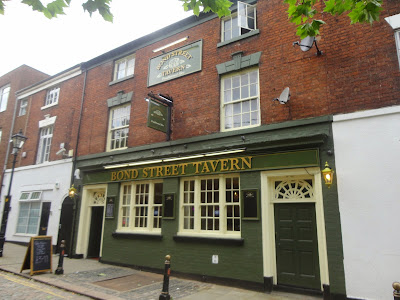 Wolverhampton, you're no longer a hot mess thanks to the Bond Street Tavern. Well, let me be the judge of that bold statement! OK! She can be the queen of your dreams, have a KIKI at this premium Gay venue? Seek something different from the norm because we know how to bring it, newly refurbished to a very high spec the Bond Street Tavern serves sophisticated realness. With an inviting atmosphere I was impressed with the Bond Street Tavern for that fact alone. Bond Street Tavern holds a monthly quiz and a fortnightly bingo that are both sure to find somebody victorious, we're all champions! Hungry? A range of freshly prepared meals are served daily from 12pm to 3pm with curry nights appearing during the week. It's too late to apologise! Friday means the Pink Pounder at Wolverhampton's premium Gay nightspot. Cabaret Saturday's make the night! I can't lie, the feeling at the Bond Street Tavern was a warm one, welcoming and safe. Wolverhampton, I know we are not Birmingham, but we can give it our best shot! Get to it then?

Could Wolverhampton become the city of the future? Have I taken a few pills? Maybe? Wolves Pride is in its third year as it debuted in 2012. Bond Street Tavern will be working with Wolves Pride on the 27th September 2014, supporting the event with drinks promotions and entertainment for the third Pride in Wolves. Contrary to report X-Factor finalist Lucy Spraggan has signed up to headline at the event so its easy to see that the day will be a live occasion! I studied in Birmingham so I became a scene queen, getting well acquainted with the many venues in the Gay Village in Birmingham, resulting in a weekend of mayhem at Birmingham Pride 2014 so Wolves Pride looks like a promising event for the city of Wolverhampton. Visit Bond Street Tavern to understand what I mean because I won't explain this business twice. There's every reason that Wolves has the possibility to be the city of tomorrow! Wolverhampton is returning, she's working on her comeback to give you everything that she's got! WV, work it!