April 2014 saw my quick trip to Germany, a five day travel experience that showed me a whole new country in a super short space of time. From Berlin to Hamburg then to finish with a day in Bremen I didn't have a second to think about much else. Deutschland deserves respect for what I saw of the country was welcoming and friendly. Duetschland, danke für alles! Yes, Germany! 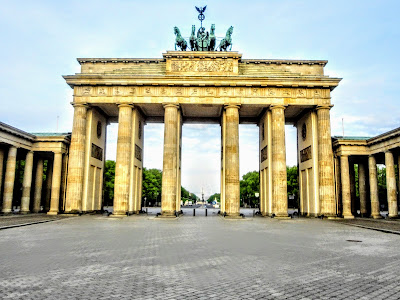 Willkommen in Deutschland! Berlin was the first destination that I visited during that April trip. The Brandenburg Gate is an amazing piece of German architecture, it mirrors the same impact that Buckingham Palace has for London. Capturing my snaps of the gate took some going because the hoards of tourists and locals ruined my view but I'm just picky! Berlin has a vibe that chills you out, my pace whilst seeing places didn't stop throughout my first two days in Germany but I was at one with Berlin. Remember the occupations of yesterday by visiting Checkpoint Charlie to understand a troubled time for Berlin and Germany, I had to pick my time for a snap at Charlie's Checkpoint due to the crowds but all I got what I wanted! I loved Curry Wurst! Get to Curry 36 to try a portion of Curry Wurst, its a must do! Getting around in Berlin was made easy by the U-Bahn, I chose to go underground from start to finish, it's great BER!

Getting to Berlin took some going with my flight delayed I made it to Berlin a bit later than expected! Scout the best fares from Germanwings, I flew direct from Birmingham Airport to Berlin's Tegel Airport. During my first day in Berlin I made it to Alexanderplatz, one of Berlin's central districts that is home to the Berliner Dom and the Fernsehturn TV tower. After checking out the Berliner Dom for a small admission fee I discovered the Easter market that was taking place in Alexanderplatz Zentrum, it was clear to see that Birmingham should take a few pointers for its Christmas German Market. Hotels cost too much in-general so I stayed at Check-In Hostel for a cut price deal, ten bed dorms aren't bad when there is a fridge full of beer in the reception for €2.00 per bottle so I was happy with that! I was pleasantly surprised to find a Dunkin Donuts in Alexanderplatz and by the Bahnof Zoologischer Garten! To my delight I found a Lidl store near to my hostel! Ja, ja! 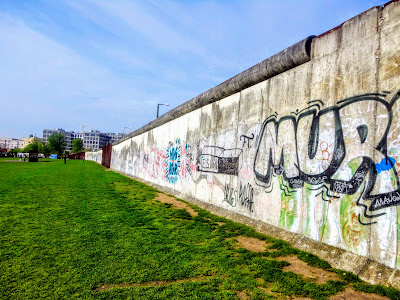 I constantly crave that next experience that took me out of my comfort zone! I'm my own travel companion, I fly solo! What would you do in Berlin? Grab your German Tuesday, head for the Spree to watch the waters past by, I loved the Tiergarten! Looking back I got that good good by just taking some time to take the views of the Tiergarten, now I miss that. Berlin is the new classic with a blend of old and ultra new sitting beside each other, politics even looks swish with the fresh faced Bundestag parliament buildings. Back to a somber note, get to the world famous Berlin Wall well where the memorial stands today. East used to meet West, I didn't want to be fancy I just took my time to learn about the crazy times people lived through until the wall was torn down. Berlin keeps on turning it up, she doesn't give a damn! Just choose Berlin already, its a city that bounces with a vibe that's amazing! I loved Berlin!

It's no secret that Germany has a colourful past but times and attitudes are changing. From the Berlin Wall to Tempelhof Airport. Berlin's former airport and airbase during the Second World War now serves as a huge park and recreation area, the runways and taxi-paths are now used by bikers rather than aircraft. Remember to stick close to the extensive U-Bahn network because if times is of the essence then get underground! Curry Wurst makes a meal and Potsdamer Platz replicates New York City yuppie chic so Berlin has a lot going on for itself. Just open your eyes to a new city, Berlin showed me something raw and edgy but why did I have to leave so soon?! Remember the Jewish souls of yesterday that lost their lives during the genocide of WWII at the Memorial of the Murdered Jews of Europe. Berlin waits for no one, have a beer for breakfast like what I did then you could indulge in some high carb treats? Berliners love carbs! I learnt and loved Berlin! Surprisingly, Germany served cool! 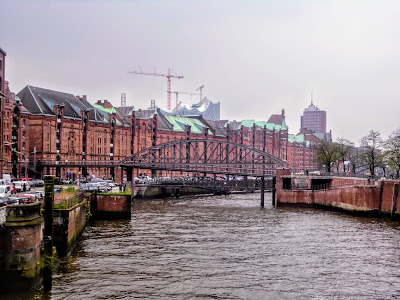 Hamburg! Go northwards from Berlin to a new German city? I chose Hamburg because I wanted to add something different to my trip and I found a flight back to Birmingham easy. Trains in Germany are much better compared with England, its cheaper and my trains were bang on time. Check out the Rathaus to be acquainted with opulence, Hamburg's town hall is accessible by a walking tour filled with vast boardrooms and a bathroom designed with onyx fittings. Hamburg stands north from Berlin, my train took around two hours, I arrived in Hamburg at around 10am to get the best of my one day in Hamburg. From the Rathaus it is a must to see the Hafencity, known as the port city that is captured to the left. Prepare for gloomy weather during April. Be transported back to another time by the warehouses and canal way painting a picture of Hamburg's industrial beginning. Hamburg it was just lovely! H, I'll return!

Leave the city behind you, take the train to Feldstrasse station to be at one with St. Pauli. Hamburg does 'hipster' in the form of St.Pauli with a maze of kooky streets that house alternative shops and cool cafes, shabby chic never looked so good! Germany is the new Turkey with a tight knit Turkish community in Hamburg, I found a taste of Turkey in St. Pauli. If football is your thing then this part of Hamburg will suit you just fine. Beim Grunen Jager is the street to check out in St.Pauli to find a selection of pavement style bars that give the best view in the area. Stay with Beim Grunen Jager for Kurhaus is a great bar to have a few drinks, chat and watch the world go by. Bikes are more popular opposed to cars in St. Pauli so just embrace the views. Turn it up along the Reeperbahn to find the Wunderbar, I need to revisit on the weekend because it wasn't popping on a Thursday night! I chose Backpackers St. Pauli, it was very cheap and comfy! Hamburg has its own cool groove! O, Hamburg! 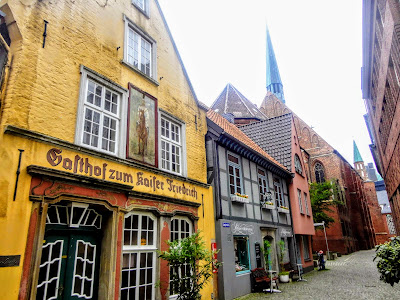 Bremen turns the clock back to the 15th Century, find a maze of darling winding streets! I was amazed! Getting to Bremen only took me 50 minutes from Hamburg by train. I made the most of my day in Bremen. Am Markt, the main square sets Bremen apart from anywhere I had seen in Germany throughout that trip. I wanted a beer from the moment I stepped off the train but I waited this time. St. Petri Dom is a cathedral that made me stand still in a state of deep thought, I'm not a religious soul but this cathedral made me sit down for at least ten minutes to just think. Five days wasn't enough to cram all the sightseeing I did in Germany because I always want to see more and more! Captured to the right is the Kaiser Friedrich pub for short, a historic German gastro pub that is located within the Schnoor district took me back in time. My hearty German pub food was served with a smile at the Kaiser Friedrich!

Look for Cooper Street well in German obviously, translated to Böttcherstrasse the small winding street has a quaint feel to it with a string of workshops, cafes and shops that line this Bremen street. I'm not too sure about the history of the street but a Glockenspiel is played every hour or so, running just like clockwork. Forget flash city pubs because the winding streets of Bremen are the best places to go for an afternoon drink, I chose one of the pubs close to Böttcherstrasse to have a beer or two. Beer on a Thursday afternoon? Bremen is different compared to Berlin and Hamburg because its a lot smaller than the other two places I have mentioned but it has countless quiet streets that date back to the 15th Century, modernity isn't a common sight in Bremen so this small town feel city makes it shine. Germany has so much more to offer, five days just didn't cut it but such is life I say? I plan to revisit with a small deviation to Austria. Experience Germany? It's so fantastisch! Yes BRE!