Birmingham does it better! After three years of preparation it was time to welcome the first ever direct flight from China to Birmingham, UK. China Southern Airlines will fly direct from Beijing Capital International Airport to Birmingham Airport return each Tuesday till the 5th of August. BHX isn't it your 75th birthday? Let's hope this Chinese connection becomes permanent! 加油! 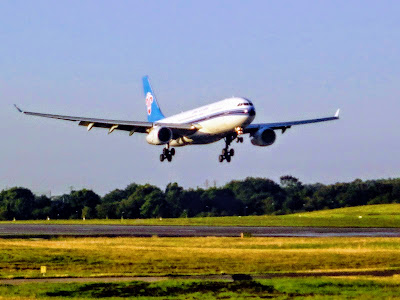 Ten minutes before schedule the inaugural China Southern Airlines flight CZ3001 made its final approach into Birmingham Airport. It was a historic moment for it was the first direct flight from China to land at a non-London airport. Being from the West Midlands I stood with pride close to the runways edge as the Airbus A330-200 aircraft touched down at BHX that cool July morning. I was lucky enough to be part of the media team, reporting alongside the television news crews it was a moment I will look back on. The energy was electric, a new era had begun with the arrival of the first direct China Southern flight. BHX knew what was about to happen that July morning! This time around at Birmingham Airport I took my passport to be cleared through the security checkpoint, I feel blessed to have been given the opportunity to experience such a momentous event at Birmingham Airport. More long haul flights to BHX are needed!


Fresh from the Middle Kingdom of China, CZ3001 taxied towards Gate 41 on the International Pier to be welcomed by its adoring audience who were ready and waiting on the tarmac. Water showered the arriving Chinese aircraft, the water cannons welcomed the taxing China Southern Airlines flight like a friendly smile. Snapping like a paparazzo I was fully in blogger mode, after being beside the runway myself and the media team had made our way to the apron that surrounded Gate 41. We said 'Ni Hao' to Birmingham Airport's newest edition the arrival celebrations could begin. Local dignitaries posed for photos at the foot of the aircraft welcoming China Southern. Birmingham Airport's Chief Execuitve Paul Kehoe, Mayor of Solihull Kate Wild, Lord Popat of Harrow the Government's aviation spokesperson, Vice President of Caissa Mr Ren Jun were amongst the welcoming officials. It's been a long time coming but good things come to those who wait! Birmingham's had it! 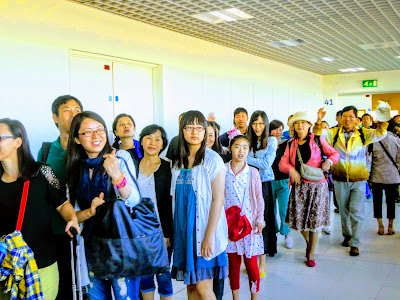 Now, I for one know that when I disembark from a long haul flight I'm not in the best mood but the passengers of flight CZ3001 from Beijing, China were beaming from ear to ear! It was a joyous and special occasion for Birmingham Airport with the first non-stop service from China, most passengers were taking photos of the festivities as they made their way to immigration control. With the early arrival of the flight from China it gave the passengers the opportunity to make the most of their trip to England, time waits for no one! It was quite a bizarre and crazy experience from one second to the other with the excitable first visitors from Beijing, China. I shall remember the smiling faces of the China Southern passengers the next time when I decide to travel on a long haul flight. Well I flew on an inaugural flight to Bordeaux, France, the reception wasn't as joyous compared to the CZ3001 flight. To China?

I shared a connection with the day for I hope to teach English in China within the next few months. It's now hopeful that if the six flights between Beijing and Birmingham go down as a success we could see a full service being announced in the near future? London doesn't have to be the answer to everything, I believe the catalyst for change for the West Midlands region was when Emirates announced their presence at Birmingham Airport, also the International Pier has opened the opportunity to accommodate the Airbus A380-800 so the beginning of the China Southern charter from Beijing only stands as a sign of progression for the airport and the West Midlands region. Birmingham has been branded the second city but it doesn't mean it should stand in London's shadow! China is a growing market to bring to Birmingham for this West Midland city offers something special. For a graduate like myself it's imperative to travel from a local airport. To return to BHX? Birmingham, get it sorted! 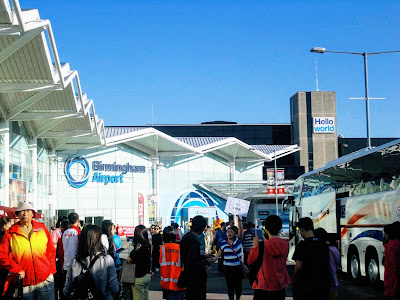 Have I been so careless not to mention that the lucky few who landed on China Southern flight CZ3001 were in for a treat? Through the joint partnership of United Travel and Caissa Touristic both arriving and departing passengers will be able to enjoy guided tour packages in England and China, acting as an added cultural exchange to the current program. It was really inspiring to see the once used drop-off and pick-up zones outside the arrivals busy with at least five waiting coaches, ready to show the excitable Chinese passengers what our amazing region is really made of. Working with Shakespeare's England shows that Shakespeare still makes that paper! Amongst the busy environment that could be seen from the front of the main terminal building the presence of media was turned up one dial or so, emphasising on MG Rover Group and Nanjing Automobile Group to keep trade in the West Midlands. Yes!

Several members of the team from Birmingham Airport would agree with me that the sight of the coaches reinvigorated the area that overlooks the Birmingham Airport logo, who knows if this sight could become an everyday thing at BHX? The morning had been full of excitement and trepidation, as much as I love blogging I'm a self-confessed aviation geek so being beside the runway that morning to see the Airbus A330-200 touch down was something else! Central News and Midland's Today had made their recordings, interviewed the necessary officials like Chief Executive Paul Kehoe. There was also a string of Chinese media on hand to catch their scoop. Looking back it was quite amusing to see the onlookers who were sitting at Costa Coffee with their morning cup, it's all about attracting the right attention. I have every faith that BHX will bring another long haul route to the regions own international airport, did someone say Biman Bangladesh? More future Chinese routes, please?! No questions! 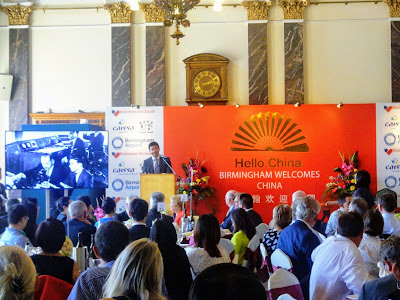 It was time to bring the celebrations to the 'Hello China' event that was held at Birmingham's Council House, Victoria Square. Networking events as such are still quite new to me but I spoke to the right people. Let's just say the contacts that I made will hopefully have a positive outcome. The two officials from China Southern Airlines made their humbling speech's, both officials expressed the positive's of securing Birmingham Airport as successful route outside London. Amongst the translations the words 'Beijing' and 'Guangzhou' sounded promising so BHX has a fighting chance to be a front-runner with the Chinese-UK business and leisure market. Praise was given to Caissa Touristic and United Travel for their extensive work to cement the program for the summer charter. The 75th birthday celebration for Birmingham Airport signified the opening of a new long haul market for Birmingham Airport. Come on!

My time spent at 'Hello China' broadened my awareness of the success that Birmingham Airport will have with the new Oriental opportunity. Lunch was lovely, we had a selection of starters and mains that were served with a range of wines. At my table I spoke to two representatives from Turner & Townsend, the construction company that built the £40 million runway extension at Birmingham Airport. I have every faith that Birmingham Airport has a list of announcements to make in the near future. One lady who I spoke to said that China is like a lotus flower, it has been closed for sometime but as time moves forward the flower starts to bloom to become a beautiful open lotus flower. From the early start when I saw the flight touchdown onto Birmingham soil to the 'Hello China' event it was an amazing day that made me realise that my passion to work in an airport environment, hasn't left me completely! Thank you BHX for inviting me to be a part of a new era. Hi China!