The Thames Path: Rollin' On The River!

Unlike a few cities around the world, London has changed itself around its legendary River Thames! I've been on the London Eye once before, gaining a new perspective from ground level, it was time to walk some of the Thames Path. From the booming years of trade the Pool of London has seen a lot, she's managed to keep her edge! London is moving with the times! Yes! 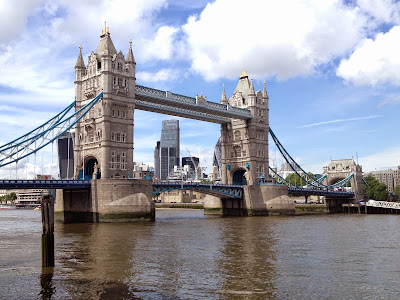 From the Tower of London to the Shard there's many a story to be told. London's Thames Path has many points of interest but I believe that Tower Bridge puts the cat amongst the pigeons. We don't have a Brooklyn Bridge in London but we don't need one because this is London! 128 years ago in 1886 saw Tower Bridge begin its construction. Tourists travel to London to marvel at the River Thames and all of the monuments that encompass the Thames Path, quite frankly I couldn't care about the gawking tourists because they are just nauseating! Tower Bridge brings North and South London together with Tower Hamlets to the North and Bermondsey to the South of the river. Tower Bridge overlooks a great traditional London pub, walk over Tower Bridge heading south to find the Anchor Tap pub on Horselydown Lane? Gentrification shouldn't be an issue for this landmark! Yes L, Tower Bridge will always be uniquely LDN!

During my trip to London I wanted to spend some time exploring the city without spending one penny, so a walk along the River Thames seemed like the best idea. It doesn't take a fool to notice that London is a city that has aged extremely well in my eyes with its wide range of Roman architecture the waterways of the Thames River has never looked better. I wouldn't say that London has been given the Hong Kong treatment with a mass of skyscrapers making a towering skyline, to keep up with the growing demand for inner-city living but its all a matter of time. The 'Walkie Talkie' building stands to be one of London's newest features along the Thames Path, it can viewed from the best angle from the South of the river with St.Paul's Cathedral in the distance. Let's keep this real because the 'Walkie Talkie' has caused quite a stir with its glass design its definitely a sizzling addition to London's city riverside. The River Thames won't change that much? This river will carry on serving looks! 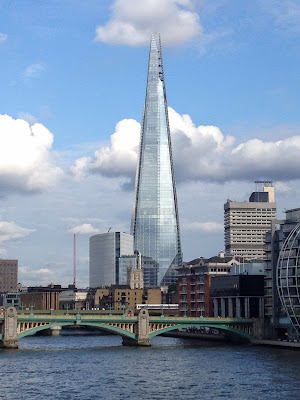 Everyone seems to be banging on about the view from the top of The Shard! I decided against going to the top, I had seen London from the London Eye and that was high enough for me because I don't take well to heights! It's no secret that The Shard has shaken up the personality of London's traditional skyline along the Thames Path with its razor sharp point touches the clouds, I'm liking this Shard business if I'm honest. There was the Gherkin building, that caused a stir at first but The Shard does it better with office space, a Shangri-La hotel and a restaurant that compliments the stunning London views. I see a slight resemblance with The Shard's glistening exterior with NYC's One World Trade Center but that's for another time and place entirely! Rollin!

The OXO Tower Wharf was once to the OXO Tower, producing the famous stock products throughout the 1930's along London's very own South Bank. Every dog has its day and that saying rings true for The OXO Tower Wharf for the factory warehouse became derelict but with a source of key investment the modern day OXO Tower Wharf shines on today as a mixed use complex with lots to offer. I walked from Tower Bridge to the OXO Tower Wharf to see what all the fuss has been about, now offices, shops and arts space makes up the renovated OXO brand building. It might have just been the time of day or the location but there was a string of artists who were sketching along the Blackfriars Bridge, funnily enough their view took in the OXO Tower Wharf as the sun set over London. Go! 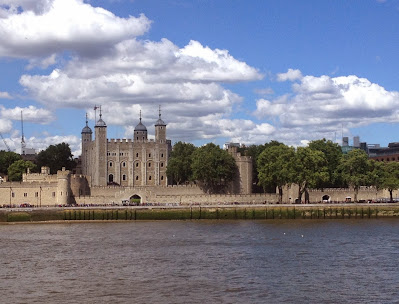 Now off with their heads! Throughout my spent time in London, I visited the riverside many times with the intention to make the most of my surroundings. Captured to the right is the Tower of London, a historic landmark that is now a working museum that attracts tourists from far and wide but I don't indulge in mainstream attractions because I can't justify the cost of the admission. I was born in London, so I feel that each time I go back I see something that reminds me of my childhood! I truly cherish each time I walked past sights such as the Tower of London. Otherwise known as Her Majesty's Royal Palace and Fortress the Tower of London dates back to 1078 when the White Tower was crafted. I found the best view of the Fortress from More London Place where the swish new pathway of offices and cafes shares a link to London's riverside. Mix yesterday's London with now! Oh, I loved the Thames Path, London! Yes!


Art Galleries take a lot attention, to be honest they just don't float my boat! Allow me to take that back for one second because the presence of the Tate Modern art gallery looked the part considering it used to be a power station before the portraits and art exhibitions made the gallery what it is today. Talking about power stations I'm sort of annoyed that I missed out on seeing the Battersea Power Station, it has a strong presence considering its vacant state. Looking towards South-East London, Woolwich has been put on the map due to a series of development phases to improve the area around the riverside in-line with the upcoming Crossrail project and housing complex for the yuppies. I'll be featuring Woolwich at another time but I felt it would be fitting to mention a part of London town that is being brought upwards. Leaving a lasting memory of my time discovering the Thames Path I brushed shoulders with Shakespeare as I brushed past the Globe Theatre. Will, keep it up!