Serving It Up... Anchor Tap, London!

London is a city of discovery by any means, this former port city holds a gem on the banks of the River Thames. The Anchor Tap public house welcomes one and all, who just wants a pie and pint? I was looking for a history lesson more than just a few drinks from the bar. Could the Anchor Tap take me closer to Dickensian London? It's all about picking a pocket or two? It is L! 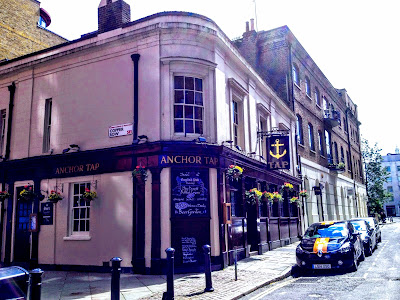 The Anchor Tap on Horsleydown Lane, London has a location that just gets better! Standing in the shadow of London's Tower Bridge this gem of a London pub sits on a quiet narrow street in the heart of the Shad Thames area of Bermondsey, London. I grew up in a busy Irish pub in Wolverhampton, so I had high expectations of the Anchor Tap. Location is everything as mentioned previously this 18th century London pub is part of the Tower Bridge Conservation Area. As breweries go by this London port-side pub belongs to the Samuel Smith Brewery, where the ethos of no publicity holds the integrity of the catalogue of pubs that belong to Sam Smith. This London pub rubs shoulders with the gentrified streets of Bermondsey, SE1 that boast swish coffee shops and restored warehouses. The Tap overlooks some of London's most desirable converted apartments, above all the Anchor Tap attracts a faithful bunch of locals and excited tourists. So, take a seat with your drink and consider yourself at home! You can be one of us!


Shad Thames is a formidable area, its cobbled lanes tell many a story from our glowing and prosperous days of the former British Empire. What's this got to do with the Anchor Tap? Take a right from the beer garden to be acquainted with the former heartland of the spice trade, the towering warehouses once housed the headquarters of Butler's Wharf. I enjoyed my pint of Cider then took off to see some of Shad Thames most endearing sights, I suppose the term 'endearing' probably wasn't used back in the days of London's shipping days? Tower Bridge looms around the corner of Horsleydown Lane, so doing a spot of sightseeing doesn't have to interfere with that tipple at the Tap. Need I be so careless not to mention that a range of brews that are served at the Anchor Tap, ranging from a pint of Alpine Lager at £2.56 to the Old Brewery Bitter packs a punch at £2.90, if you're like me I loved a pint of Cider for £4.24. The Anchor Tap doesn't break the bank like many other London pubs. Prices current at time of blog being published. 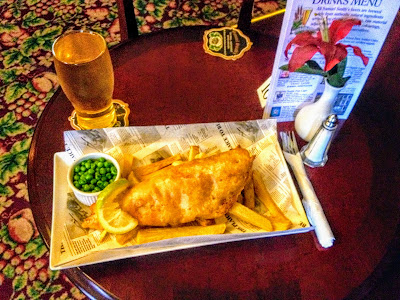 Like any traditional London pub, it is imperative that the food served is fresh, flavoursome and affordable. From what I saw at the Anchor Tap its approach to serving honest pub food is one of the landlord and landlady's core principles. Serving all of the classics from Fish 'n' Chips, Steak & Old Brewery Pie, Bangers & Mash and Liver & Onions. Main meals range from Bangers & Mash at £5.95 to Fish 'n' Chips at £8.95. Captured above is my hearty serving of Fish 'n' Chips that was served with homemade chips and garden peas but mushy peas can be ordered instead of my choice, beggars can be choosers at the Anchor Tap. Being a frugal soul whilst travelling I was surprised that my Fish 'n' Chips and one pint of Cider came to £13.19, that's blinding good for London prices! Leave those cravings for a McDonald's or a Starbucks for another day, when in London it's a sin not to indulge in some honest British cuisine. I treated myself! I have heard the East Asian costumers love their British food, only good reviews at the Anchor Tap! Sure, L!

I took a seat in the upstairs lounge because food cannot be served at the bar or anywhere downstairs at the Anchor Tap, traditional to the core it didn't take me very long to realise my dining experience would be enjoyed very much. Word of mouth keeps this Bermondsey pub fresh with new punters but surely in our modern age each customer should be making it their duty to shout all out this pub, or maybe tweet all about it? In a time orderly fashion food is served upstairs in the lounge daily, I don't want to sound ridiculous but it had an air of the East End with the bust of Victoria sitting above the bar I couldn't resist to say 'Get out of my pub!' Peggy Mitchell, much? Catchphrases aside the decor speaks for itself with a cosy and traditional Victorian style that is only a few metres away from Tower Bridge and the once trade rich Pool of London. Take a chance on something traditional and trust in the Anchor Tap. Don't just take my word because seeing is truly believing. London serves more! Pour me another pint, please? OK! 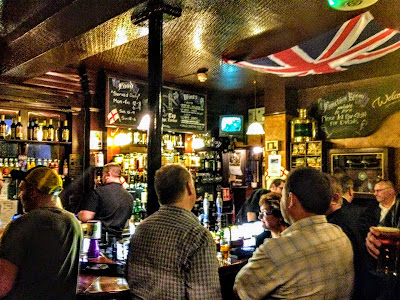 You're part of the furniture! Didn't you already know that? So, come on down to the Anchor Tap for a good old knees up! Translated into modern English 'a knees up' basically means a good time. After one of my days sightseeing I returned back to the Anchor Tap to find a lively atmosphere with many of the locals and some new customers enjoying a beverage or two! Maybe three? With the drinks flowing and conversations endless the vibe of the Anchor Tap that evening was really warm and welcoming with an uncomplicated air about the whole thing. You should take a walk over Tower Bridge to the Anchor Tap to experience a slice of London pub culture! Your visit could well make your capital visit memorable for the right reasons? Do you believe in paranormal activity? Here's a fact that's worth investigating because 'Charlie' a previous landlord of the Anchor Tap roams the pub as a ghost. Ask about the meaning of 'Horselydown Lane' there's a story behind the Anchor's history. Come and see for yourself! Go!

Getting to the Anchor Tap won't take all day, this London pub is only ten minutes away from two London Underground stations. Take the Jubilee or Northern Lines to London Bridge Station and walk east down Tooley Street where you'll need to take a left onto Horselydown Lane to reach the pub. Otherwise take the Circle or District Lines to Tower Hill then walk across Tower Bridge, take the steps down to Shad Thames from Tower Bridge then you will find the Anchor Tap. Check the buses as well for there are connections with Covent Garden via the RV1 bus that terminates in the West End and at Tower Gateway. Better still forget the public transport routes by taking a walk down the Thames Path to discover the nearby Butlers Wharf to see where Charles Dickens took inspiration from the warehouses and winding alleys for his novel Oliver Twist, not forgetting Nancy's Steps found at London Bridge, she did love Oliver! Trust in the Anchor Tap, because I did so. I'll seeing you soon at the Anchor Tap? Yes, mine will be a Cider!

Consider Yourself At Home!