I love a good show, I jumped at the chance to spend a great day up West! London shows me something new each time, there's just so much to love in London! The Bodyguard: The Musical was my choice, even though Beverly Knight wouldn't be performing the main role that afternoon! Big up WV, regardless B! Soho always makes my heart feel light! Yes L, Chinatown! 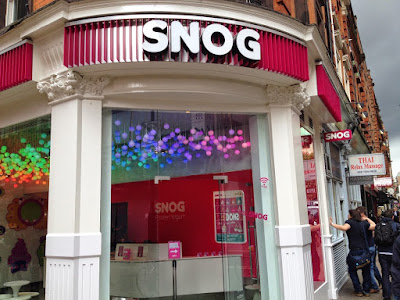 Soho has my heart for its where I spent my 19th birthday, I want to go back now! I had my first SNOG in Soho! Pardon my suggestive tone so please allow me to explain what SNOG is. Imagine a camp disco themed frozen yoghurt shop and that's exactly what SNOG served to me! I choose the fresh natural yoghurt served with two topping that had to be passion-fruit and raspberry then finished off with a squirt of caramel sauce. Being a social media buff I saw it as my duty to take a photo of my first SNOG serving with the respected Twitter hash-tag. Let's leave my yoghurt euphoria behind, I could go on about that disco themed yoghurt cafe all day! I've been to this part of town countless times as a child but upon my 19th birthday I was shown a whole new world at Madame Jojo's on Brewer Street. Let's just say that Kitsch Cabaret triggered a thought process that was lying dormant until that night. Blame it on the Brewer!

I've been missing Birmingham like something rotten so being back in Soho for the afternoon gave me something that reminded me of my Birmingham Pride weekend, all is well so I can't complain! The beauty about my previous escapade to London was that I had more than just one day to experience a lot more than I usually have the chance to accomplish. Taking some time away from the rain it was time for a lager or two in the White Horse where I spotted a poster of the songstress Beverly Knight that promoted her upcoming show on the West End theatre scene. The first part of my fabulous artsy day in London fared to begin with a delicious tone for I was still impressed with my yoghurt from SNOG. I had discovered London Live during my London visit so I was familiar with the show 'Drag Queens of London' so I made it my mission to spot the West Midlands born queen 'Baga Chipz' but I only saw the off license that she must frequent to get her gin liquor fix! Soho, I'm sure that I saw it! 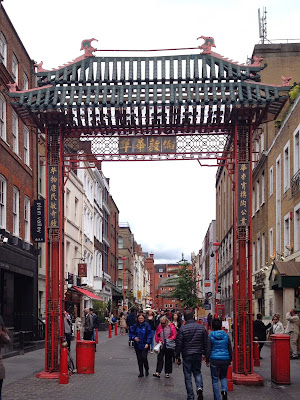 I said '你好' to Chinatown because its only round the corner from the lively streets of Soho plus its a great excuse to eat! Captured to the right is the Chinese gate of good fortune that welcomes each and everyone of its guests to Chinatown, a wish must be made before we walk under the arch. Gerard Street is the epicentre of all things Chinatown London for me, there's just something about the bright coloured shop windows and the ducks hanging from the restaurant windows. I wanted Dim Sum but I'm a creature of habit for Birmingham holds my first taste. I have learnt from being introduced to Oriental culture is that Chinese tea is the best so I rooted through Oriental Delight to find my favourite Oolong Tea, at Loon Fung it was half price! 很好!

Lunch didn't cost more than £6.00 per person for a substantial 'all you can eat' buffet at Mr.Wong's. Chinese food is my favourite! What compliments any Chinese meal? Who said Bubble Tea? It's been a tradition for over a year to indulge in a large cold Bubble Tea after a filling meal, so I had to carry on with an Oolong Milk Bubble Tea. Choosing 'Chatime' for my Bubble Tea that cafe specialised in Taiwanese tea and I favour the HK side of thing so I guessed its all about give and take. Chinatown W1 will always be one of my favourite segments of London, I'm a sucker for anything Oriental. I left feeling satisfied and accomplished for my day up west was turning out to be very productive and enjoyable. 谢谢你 Chinatown, London for serving up a great occasion! Until I get to China, will it be fine? 加油! 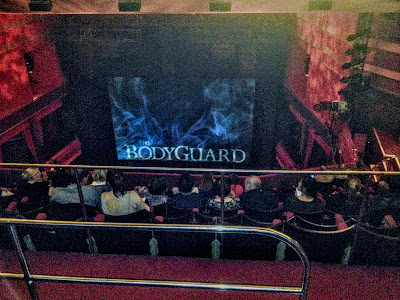 As Wolverhampton's own singing superstar bowed out from her stint in the hit West End show, The Bodyguard had a new leading lady had took her place. Booking my tickets to see Alexandra Burke play the part of 'Rachel Marron' who was portrayed by Whitney Houston in the original film. I will always love a Whitney tune because she's a Newark girl. Waiting in my seat at the Adelphi Theatre in the heart of London's West End I couldn't wait any longer for the show to begin! I had high hopes for Alexandra Burke because she's a singer who is famed for her powerful voice and girl performed with soul! The turbulent nature of the show Alexandra and her co-star Tristan Gemmill played their parts with conviction, I admit a joke or two was made so the pace of the show wasn't completely serious. Hits like 'I Wanna Dance With Somebody', 'I Have Nothing' and 'I Will Always Love You' were sung! B, we missed you!

I shall preach forevermore that us Brits know how to appreciate a West End show compared to our American counterparts on Broadway because we embrace a lively encore, let's just say that Alexandra Burke and her Bodyguard Musical cast had us dancing and singing in the aisles at the finale. I had my first SNOG and tweeted all about it, yes I need to visit that campy yoghurt shop again or a new location should be opened in the West Midlands?! I didn't see 'Baga Chipz' but I definitely saw her local off license along Brewer Street but she performed at Birmingham Pride 2014 so all wasn't lost. Who honestly knows when the next time I'll hit Soho for a shameless night out? Mr.Wong's served up some fulfilling Chinese food for lunch! I successfully found a great Bubble Tea shop for a delicious cup of cold Oolong Milk Bubble Tea and I also bought my favourite Chinese loose leaf Oolong Tea for a right old bargain! London's W1 region treated me well. Aside from anything else, 我爱你伦敦! I do 伦敦!