I'm no hipster but I had to check out London's cool East End to see what all the fuss was about! After about five days of military sightseeing I fancied a drink or two so I set off for Spitalfields to have a pint of cider at the Ten Bells pub where Jack The Ripper committed two of his attacks. I also ate a great curry at one of the curry restaurants along Brick Lane. Yes, LDN! So very drunk! 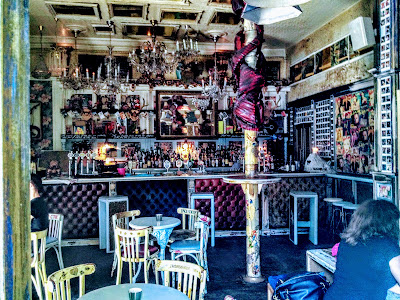 I was seeking something relaxed because for the last week I had been running around London, finding new things to experience in a city I had so much see. Relaxed?! I look back to my hipster outing when I had to run for the bus after my curry. Anyway, after walking over Tower Bridge I made my way east to Spitalfields, but I'll get back to that in a moment. Shoreditch showed me that hipsters are cool and they have created their community within buildings and warehouses that looked like they were once abandoned and dilapidated. The June sunshine helped me work up quite a thirst so I found the Commerical Tavern, I wasn't ready for the crazy cool decor of the pub until I took a seat at the bar. I really loved the vintage shabby chic look of the pub so I was very impressed with my find in retro London! Shoreditch defecated all over Camden big time boy! No shade! I met an old friend at the Commercial Tavern! No, bad Rosie!


Hello Shoreditch! That old friend happened to be a pint of 'Old Rosie' I vowed to have one pint because that cider is 7.3% and that's strong for cider! I don't think! I kept to that one so all was good, I thought I had learnt my lesson from my experience drinking pear cider. I Made the most of the sunshine walking around East London looking towards the streets of Dalston. I'm a realist so spending the first part of my alternative London afternoon walking around the streets of E1 sounded like a plan. In a strange way it was quite fancy, who's that to say anything different? I wasn't in a position to spend my pennies on clothes because I always look after my pounds! I got a really cool vibe from Shoreditch it was a Saturday afternoon and everyone was just doing their thing so you already know I liked it! The previous day I went to Woolwich so my crusade through London was showing me a completely individual set of neighbourhoods that all had their own flex. No, no Eastenders, E1 does it better! 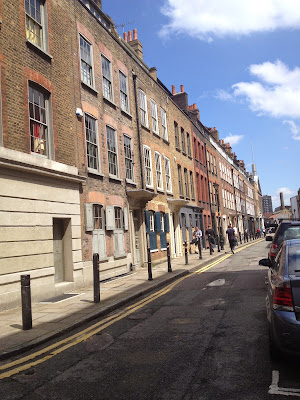 I had not heard of the French Huguenots of Spitalfields? The now fashion forward gentrified area of Spitalfields sure had a secret to tell me! When the French Huguenots arrived in Great Britain some of the refugees radiated towards Spitalfields, London and soon enough this East End hotspot has become another hipster cool environment. I'm no history buff but it didn't take a lot to see that the streets of Spitalfields had been restored to their former glory. Finding Fournier Street wasn't too bad! From the 1700's over 50,000 came over from France to become England's first official refugees for their branch of Christianity was frowned upon during that time in France. At the end of things fashion saved the Huguenots! Yes, E1!


I found myself at the Ten Bells pub, a historic pub that was frequented by the infamous Jack The Ripper who committed two of his many murders at that very pub. I was only stopping for two pints of Strongbow, out of nowhere I got speaking to this crazy couple from Thailand who had more money than they needed so it was free drinks for Joe! I had a great afternoon at the Ten Bells, I had my pride so I paid for a few drinks in-between because I don't believe in being a complete free loader, it's not right but it was okay! Throughout the eccentricity of the afternoon that turned into the early evening, I loved the vibe at the Ten Bells for the pavement area and pub had become really busy with the chatter of the local London folk. I knew it was time to move on! What a mad day! What the? 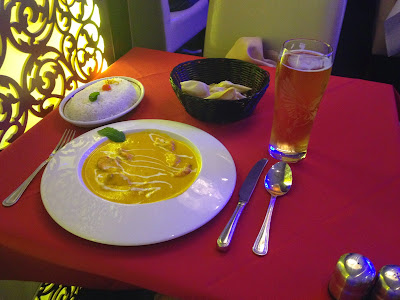 Brick Lane was waiting for me even though I had already checked it out earlier that day I still needed to have a curry, little did I know I  needed to hurry things up! Keeping things simple I chose the Standard Balti House, yes that's the actual same of the curry house! I ordered the Goa Chicken with a side order of boiled rice and naan bread, as if I hadn't had enough to drink I decided to drink a pint of Kingfisher Indian Lager. I now understand why a curry is the best way to finish a good drink because I needed something substantial to eat after that booze! Without any hesitation I ate the lot, paid and got myself back on a bus towards 'the water' as that's what I asked for directions because the night was wearing on once I had finished my curry, with luck I found the main road after getting to know Bethnal Green with just enough credit on my Oyster card I jumped on the bus. No, I didn't care that day, I was over it!

Looking back it was great to meet my cider nemesis in the form of Old Rosie at the Commercial Tavern, I'll be reunited with her one day soon I just know it! Taking a chance on Shoreditch I made my way through Pudding Mill Lane to find the hipster warehouses that I could have spent a fortune on vintage clothing but I'm currently a poor graduate and ex-student! It's too late to apologise because the amount of cider and god knows what else I drank at the Ten Bells pub, I enjoyed my day and curry in East London! Spitalfields served up some vintage Huguenot hot couture but I spent all my money on booze and curry! The streets were literally my runway that night because I got myself back before closing time, the folk of Bethnal Green shouldn't be judged because I found the 49 bus to London Bridge thanks to them! London served another full packed day and night of new experiences that turned out to be suitably satisfying! Stay classy E1 because I didn't know how to then!