Lichfield, England... Thanks For Everything!

Lichfield, a pint-sized city that doesn't take a minute get to know. I took certain inspiration for the blog title from favourite cheese 'Cathedral City!' Lichfield isn't famous for cheese, it is known for its amazing cathedral that's steeped in over 674 years of history. Do you know who wrote one of the first English dictionary? Lichfield holds that knowledge! No donations, I'll blog about it! 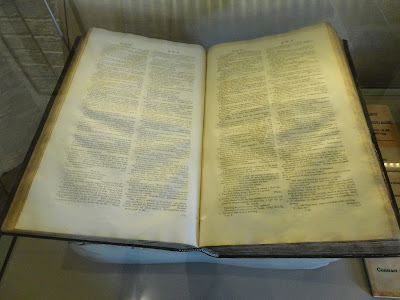 Dr. Samuel Johnson was born in Lichfield in 1709, where he became the publisher of the first English dictionary. I love to write and blog but I don't think I'll be writing an English dictionary, well I do use some unusual words sometimes in my blogs? Captured to the left is one of the original copies of the first dictionaries at the Dr. Samuel Johnson Birthplace Museum in Lichfield. I had been to Lichfield a handful of times before making my most recent visit because I just wanted to do some exploring and see some places that I never got the chance to see. I took the tour around the Birthplace Museum to see what Johnson had really accomplished, I'll be honest that I didn't know a whole lot. Located on Breadmarket Street in the heart of Lichfield's ever quaint city centre the original features of the building are truly remarkable. Considering Dr. Johnson didn't have best start he did good eventually. A wordsmith? Yes!

Fame and fortune in the 1700's brought a different stature compared with the range of today's celebutantes, or in simple terms 'Wannabe's!' Getting from the big smoke to the city of Lichfield is so easy by train from Birmingham New Street station and no dictionary shall judge you! I'm moving with the times by not leaving a donation at a charitable organisation or museum for I see a blog as a great way to shout out and great a buzz about something worthwhile. Lichfield's great minds go from Dr. Johnson to another formidable character that has more of a reference to the arts. Samuel Johnson was friends with David Garrick, an actor who caused quite a stir through his time and now has a theatre named after him in the city called the Lichfield Garrick Theatre. I surprised myself because I don't really care for museums and the Dr. Samuel Johnson Birthplace Museum did impress me much! I must admit that this section sounds rather like a history lesson but that's just what I saw. 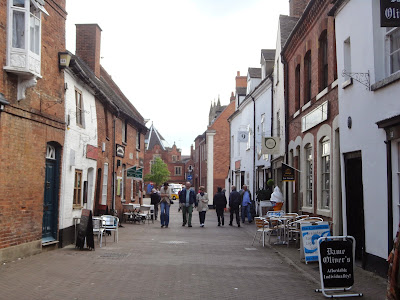 Lichfield has got it going on! Located close enough to the city of Birmingham but within easy reach of the British countryside, Lichfield's a city that offers something different from the big smoke. Like many cities its makes up for its smaller size with an abundance of original features and winding streets that made me forget I was only thirty minutes away from Birmingham by train. To the right is a normal street that's just around the corner from the Dr. Samuel Johnson Birthplace Museum that's home to a range of independent cafes, hair salons and sweet shops so everyone is catered for. I take a lot of things for face value so Lichfield ticked the boxes for me. I'm used to busy streets and lots of unnecessary trouble but I chose Lichfield to get away for a few hours to seek a new adventure. I have relatives who used to call Lichfield their home so I was familiar with the streets of the city centre. No stress, Lic!
Why did I choose Lichfield? That's a very good question! I cast my mind back to December 2013 when I wanted to seek a new adventure, so tweeting up a storm I came across the twitter account of Visit Lichfield and the rest is history, but I must admit that life does get in the way so I got myself to Lichfield before a ridiculous amount of time would of past. For a pint-sized city I must say that Lichfield has bore some great minds from the writer Dr. Samuel Johnson to the actor David Garrick there's much to make this city very famous for its historical figures. Someone must of cast a spell on Lichfield! I just wish I could transport some of that small town city vibe to my love for living in bustling cities but Lichfield can keep its charm, its just not good to steal! I did come across the Erasmus Darwin House, former home of the physician who I think achieved a fair amount in his time but I decided against taking in that museum for the weather was lovely during my Lichfield afternoon. Get to Lich! 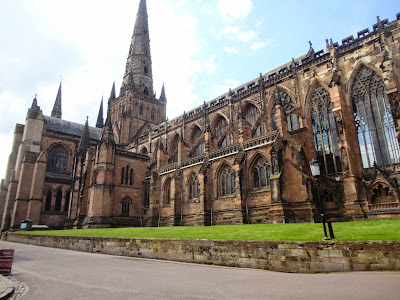 Lichfield has an incredible cathedral! This city has something special, I love it! Dating back to 674 years or so it's no secret that Lichfield's cathedral makes this town city! I'm not religious but I just can't say no to exploring a new place of worship, call it a cultural and spiritual encounter. My last visit to Lichfield cathedral must have been when I was at secondary school, I had the another chance to see this inspiring place of worship. I took my time to see the interior of the cathedral to get the most of my whistle-stop day in Lichfield. Choosing to light two candles because that's just what I do when I pay a visit to a church or cathedral in any case. Dating back to the medieval times Lichfield cathedral holds one of England's most unspoiled streets, known as Cathedral Close. I suggest that you take half a day, there's just enough to do for the afternoon. Would you visit Lichfield? The choice is yours! Well, I did! So?


Cathedrals, winding streets and its own dictionary means that Lichfield is a city that has the potential to inspire us. A budget is what I am on so my limited funds worked well with a cheap train fare to Lichfield and also indulging in a McDonald's for lunch to save money. I now have a clear understanding about where the dictionary comes from and who wrote such a piece of text. As for a cathedral that dates back to the deepest stages of yesterday I don't know how to put into words, oh I do but that did sound rather dramatic. Keep those stress levels down by choosing a smaller and picturesque city for even an afternoon. From famous figures that have left a lasting presence on Lichfield and the wider country, from dictionaries to a theatre I don't know if I could carry on with the likes of Johnson and Garrick. I suggest that anybody should take the train to Lichfield to experience a Staffordshire city with a small town vibe! Lichfield is certainly the cathedral city! She is very that!