Birmingham Pride 2014: Through The Rain, We Danced On!

I attended Birmingham Pride for the first time on the 24th and 25th of May 2014 to experience an amazing weekend even though my Bank Holiday Monday didn't feel so pretty! I was at Birmingham Pride 2014 to simply have a great time and to be part of UCB's LGBT Society. The appalling weather didn't stop us for through the rain, we all danced on! Oh, where was my Gin?! 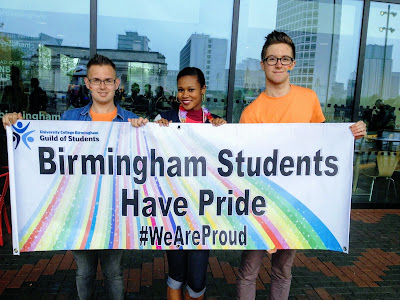 Birmingham Pride 2014 had been building to the end of my final year at University in Birmingham and the time spent as a member of the UCB LGBT Society. We had a parade to work out so along with several other Birmingham Uni's we were decked out in the colours of the Rainbow flag of freedom for the Pride March 2014. The weather wasn't exactly sunshine and bright skies but we donned our face paints and made our way to the beginning of the march outside the Council House in Birmingham's city centre. Remembering that being fabulous is all well and good it was great to hear LGBT Activist and Pride Ambassador, Peter Tatchell make his opening speech to initiate the beginning of the March. 'Equality and Freedom All Around The World' happened to be the mantra for the 2014 event to reach out to our LGBT neighbours in Russia, Uganda and Brunei due to homosexuality being illegal! From the heat of NYC's Christopher Street to Birmingham's rainy Southside it was a contrast of Pride, past and present.

Almost every part of the LGBT community of Birmingham marched proudly through streets, let us not forget the Straight Allies! The rain pelted down like a monsoon! With our banners we served our motto and hashtag that as UCB students #WeAreProud to be a part of this event. From the floats that were filled with the muscle men and go-go boys to a gaggle of fabulous drag queens anyone who was anyone was out to celebrate Birmingham Pride 2014! Being behind the Nightingale and Village Inn floats we danced along in the pouring rain to some of today's tunes and to a perfectly suitable anthem by 'The Weather Girls' for yes we did sing 'It's Raining Men!' A song that was aptly named for the theme and forecast of the day! It felt like a family affair because being a part of the UCB LGBT Society gave us a purpose to march! The only religious reference welcome was Madonna's 'Light A Prayer' I noticed a number of outspoken onlookers tried to make their feelings known about the march. Who was the sinner? Not me! Jesus Christ! 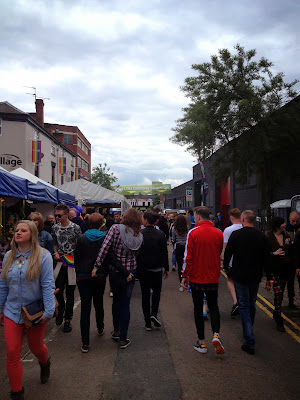 Birmingham's Gay Village has played host since 1997 because Birmingham Pride has been around for  an astounding 17 years! From Missing Bar on Hurst Street right through to Eden Bar on Sherlock Street the vicinity of the 'Village' was a hype of energy for two days through the rain and through the shine. After Saturday's monsoon conditions it was a relief to see some blue skies, maybe somewhere there would be a rainbow? That would have been welcomed with open arms! Captured above was one of the main streets alongside the line of community stalls that lay close to the Village Inn Cabaret Marquee. For my first Pride in Birmingham I felt a certain sense of togetherness in the air! Don't we live in the age of modern love? The areas around Kent Street, Bromsgrove Street and Inge Street, sure the Nightingale Club was lively! I was ready! It was my last weekend as a student in Birmingham, a double celebration for sure! It was a celebration!

Throughout my final year at university I wrote and researched my Dissertation, surrounding the development of Gay Tourism in Manchester to find a nationwide trend with most other Pride events in England. I experienced a great Pride in New York City back in 2012 but through research and understanding the theme and working of Pride events work in a different fashion, honestly? To cut a phrase the 'Pink Pound' numerous authors contested that Gay orientated events attract visitors that have a higher level of disposable income, a lucrative market to invest in. Birmingham Pride being a young event has seen a surge in popularity leading to a 65% rise in attendance for the 2014 Pride event. A 'Gay Glastonbury' vibe was about with the wristbands and security. How many 'LGBT and Non-Binary' people had contributed to the 'Pink' economy that weekend in Birmingham? Pride schooled me for sure! B, you know that I love you that much! 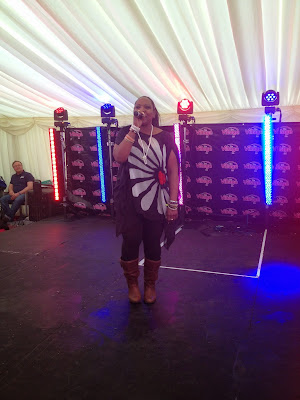 It had to be Angie Brown the soul diva of the 90's! Returning to the stage at Birmingham Pride 2014 made my day! Bless one lady in the audience for she got right into the 'Gonna Get You' groove for she didn't waste anytime. I loved every second of that very performance, I said Birmingham Pride 2014 'I'm Gonna Get You!' The Marquee of the Village Inn was jumping right back to the 90's! Don't tell anyone because I'm a child of the 1990's! I honestly loved the Village Inn Marquee for there were two bars so getting another drink didn't take to long, plus a healthy number of my fellow pride-goers were quite handsome. You already know, I had a side glance but the weekend was for me, myself and I! Back to the formidably shameless Sandra, she sure knows how to stir some controversy! Countless Friday nights I made my way down to the Village Inn to see Sandra London hurl her no-nonsense rolodex of jokes. Of course, Angie brought it!

Drag performers make Pride for me, they were the first ones to but the bass in their walk and through that first stance of defiance during the Stonewall Riots. I just couldn't get enough of the Village Inn Cabaret Marquee, I'll be honest I preferred it to the main stage but we're all different aren't we? On Sunday 25th so I paid my dues to the mainstream talent that was on offer at Birmingham Pride. I saw a wide array of Queens strut their stuff, making everybody laugh and gasp at their razor sharp sense of humour. Birmingham needs more Drag Race appearances! Something is wrong! Hangovers aren't allowed so I made my way back to the Village Inn Cabaret Marquee as soon as I could on Sunday 25th for Saturday had served up some good times! Sandra served as compare, she had everybody in stitches of laughter with her unapologetic jokes and slaying! I loved it! The ciders were going down nicely! Birmingham wasn't going to judge me! 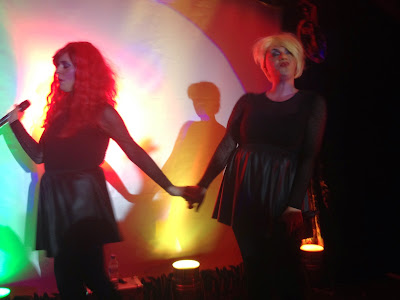 Dressed to kill I returned back to Birmingham's Gay Village for my final slice of Pride 2014 because I had two final 'Queens' to see that Bank Holiday Birmingham Pride Weekend! Choosing Eden Bar to conclude my Birmingham Pride 2014 experience! I had not previously been to Eden Bar so I was doubly excited to see 'The Queens Of Pop' there! The party was turned up and everyone was having a brilliant time, I was advised about the joys of Botox and was told I looked 18! The clock stroke 1am it was time for Manchester's hottest duo to take to the stage! I found my way to the foot of the stage to get the best view of the fabulous 'Queens Of Pop!' Beginning with their 'Cheryl Cole' and 'Nadine Coyle' 'Girls Aloud!' Go go back to Belfast! Go go! The 'Queens' served a little 'Taylor Swift' blending into a dab of 'Kylie' and 'Dannii Minogue!' Straight up, I was loving my life, both seeing the 'Queens Of Pop' and also by being in a new club in the village! Very risqué but funny! Would they sing their 'Atomic Kitten' tribute song? Yesss!

Where's Kerry?! C'mon Girl! Wobble Yer Head! I shouted that line with pride! The 'Queens Of Pop' did a great 'Shakira' and 'Rihanna' but their 'Atomic Kitten' parody reigned supreme! Donning their trademark wigs for their 'Whole Again' finale it was such a great place to be standing amongst the crazy crowd! Now what the hell is that Kerry?! Natasha put Kez in her place with a suggestive little white bag of something! It's great to begin something with a smile and finish it with a smile no matter how many ciders and Gin and Tonic's were consumed for the Spring Bank Holiday of May 2014 was out of this world! So from my moment marching through the parade to taking a few close looks at the operation inline with my Dissertation I would not  want to change a single thing! With all the Drag Queens to the sensational Angie Brown I enjoyed my first British Pride event in Birmingham! Sandra stay fierce! My final weekend in Birmingham as a student ended with a bang! Enjoy Pride in 2015 because I'll be in China! Yes!
Happy Pride!