Serving It Up... Turtle Bay, Birmingham!

Birmingham might not have the most Michelin star restaurants but this city is continuously welcoming new eateries that suit its International pallet. I'm a lover of Jamaican and other Caribbean cuisines so I was pleased to see a Caribbean orientated eatery in Birmingham's city centre. Get into the bashment groove because It's all going to be irie at Turtle Bay, Birmingham! 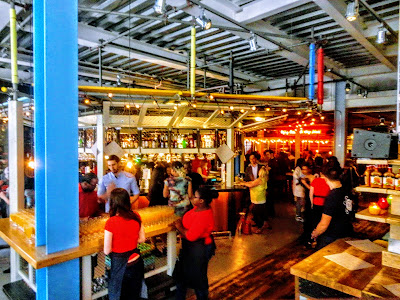 Turtle Bay's Birmingham location was no longer a building site, it was a hype of activity during the launch evening with the chatter of the selected few. We all experienced the Caribbean vibe of Turtle Bay. I would like to think that food blogging is a current avenue to take, life is all about spice and variety, so I'm all in favour for some Island cuisine. Yes! I was fortunate enough to be invited to the launch evening of Turtle Bay, Birmingham on the 17th of April 2014. The atmosphere emulated something what I could imagine a Caribbean beach restaurant to be like! That wasn't a question! I was greeted with a smile by a representative of the Turtle Bay team, the vibe from the workforce was very upbeat. I arrived within the time I was given because no-one wants to be on island time! I love a good food blog but I like hearty portions not nibbles! Who doesn't I love food? I hadn't been to any restaurant openings before that day, a new opportunity for me! Good on you Brum! Birmingham come on, you should be hungry? Get with it, Brummie!

Like I mentioned before I'm mainly a travel blogger, so with each food project I get my teeth into has been to be a whole new experience so far. The launch of Turtle Bay started around 6.00 pm with a lively set of music played by the in-house band. I recognised the music instantly because they played some 'Lovers Rock' and also other blends of music from the islands. As I enjoyed a complimentary cocktail or two I saw the Lord Mayor of Birmingham, Councillor Mike Teddy. He took part in a group photo not long after he was greeted by the Turtle Bay team. Birmingham's definitely warming to the idea to have more city centre based sit-down Caribbean restaurant. The launch was the perfect opportunity to have a mosey around the restaurant to see what would be in-store for this restaurant once full service begun. Aside from the proceedings of the launch I thought to myself that I needed to try some Jerk Chicken, Rice and Peas with Dumplings! Yes, Turtle Bay has awoken John Bright Street! Birmingham, don't be a jerk! Have some chicken, eat! 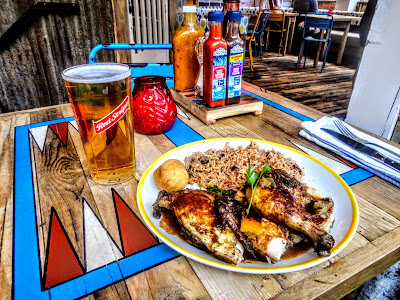 Caribbean food and Birmingham work well together because Birmingham's many districts north of the city centre are famed for their Jamaican and other Island food. I've not yet been to Handsworth or Lozells for some authentic Caribbean food. Now that I have access to a vibrant and live Caribbean restaurant just around the corner from New Street Station and The Mailbox makes a welcome change. Don't worry outer neighbourhoods, I'll be visiting for some food soon! Turtle Bay, just don't make me choose! Shouting it from the rooftops, I'm a lover of Birmingham! I found it difficult not to get into music as I ate my Jerk Chicken because, yes I love Bashment music, I won't lie I can Dutty Wine with the best of them! As well as Bashment music playing the island themed playlist also featured some Lovers Rock and also some Bob Marley! You wouldn't get that spice and realness anywhere else in Birmingham's city centre! I kept my promise by coming back for a meal after the initial opening of the location. Belly full!

Whatever food from around the world you like I suggest you embrace the charms of Caribbean food, not just from Turtle Bay, Birmingham but in general terms. I'm a lover of that extra spice from Jerk Chicken to Curried Goat and Ackee & Saltfish because food is for enjoying and blogging about of course! I have feeling I could be back to try something else from the menu at Turtle Bay, Birmingham if that's OK? I'm thinking of a Curried Goat dish with a side of Rum for good measure. To quote a 90's club anthem I think that the opening of Turtle Bay, Birmingham 'Rides on Time!' From launch night to finally getting a chance to have some Island food I know that being a nosy beggar and an avid Tweeter helps me be in the know about the goings on wherever I am and in this case Birmingham! I know I haven't flowered anything up because that's not staying true to my blog and being real is key to me! I rate Turtle Bay, Birmingham because they serve great tasting food in a vibrant setting! Sure, I'll be back! No yamabella here! 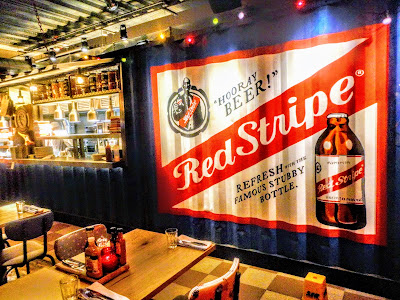 After the launch, I got the chance to see Turtle Bay's full service layout with a fair few guests who were enjoying their food. It's not just food served at Turtle Bay, Birmingham because I found an extensive cocktail menu and rum selection to choose from! It didn't take a rocket scientist to tell why the bar was bustling with guests enjoying their weekend drink! Like I said before I chose to drink a Red Stripe, a Jamaican lager that was just right! Keeping it real, I'm more of a cider drinker but the considering was well worth it. Guinness Stout is also available because Guinness isn't just for the Irish! As customer service goes by the team at Turtle Bay, Birmingham are friendly and polite, from the servers to the management I was pleasantly surprised. From my tailored meal request I was recognised from the launch so that also boded well for my Caribbean dining flex. Birmingham's got a new winner in Turtle Bay, let it bring its soul food and drinks to town! I didn't have to navigate life with this student loan, that would be dangerous!


I will be honest that I couldn't fully judge the taste of the menu from the samples from the launch, as lovely as they tasted I wanted more to fully satisfy my taste buds. A few days after the launch I returned to Turtle Bay, Birmingham to judge the menu for myself. I ordered a pint of Red Stripe, a Jamaican lager that was ice cold and complemented my main course just nicely. Being real and a bit awkward I asked Jessica from Turtle Bay, Birmingham if I could trade some components of the Jerk Chicken dish for just Rice and Peas and a Dumpling, its all about the understated choice to enjoy the full flavour. Hear me now! As conversation goes I learnt that Birmingham just gets smaller and smaller, but its all good! My Jerk Chicken packed a punch with a certain spice but I love to spice things up sometimes. I loved the way the sauces were placed on the table, a little extra something Turtle Bay, Birmingham does for their guests. If you have a gripe with your portions, get down to Turtle Bay to sort that out! Who's the yamabella?

Keepin' It All Irie!