I love Berlin! In German 'Ich Liebe Berlin!' Berlin called me, I had been captivated by the presentation and event that was held by Visit Berlin that I attended in December 2013. My sense of adventure got the better of me when I threw all caution to the wind by booking a whirlwind trip to Germany that took a very fast pace, but what good is it sitting in your room? No, I didn't! 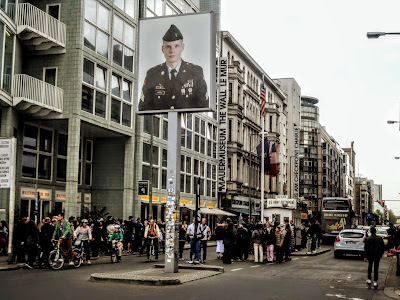 Berlin stood before me, I chose to begin my Germanic adventure with a stop at Checkpoint Charlie to see what all the fuss was about. Located just around the corner from my Check-In Hostel stood the former crossroads that separated Berlin during the Cold War. The crowds of people that congregated around the former border crossing really didn't impress me much, but it was Easter Monday and that's a big deal in Germany. I guessed that was just so? I thought Checkpoint Charlie was really something and it didn't take a genius to find it from the U-Bahn because this sight boasted its own underground station named 'Kochstrasse' on the U6 line. I'm not one for museums, so I did some background reading about Charlie's Checkpoint. To avoid the droves of tourists I randomly returned to Checkpoint Charlie around 10pm to be greeted with peace and quiet. Tegel Airport was 35 minutes away? Ja, B!


From the Checkpoint to the Brandenburg Gate I began to realise that Berliner's took Easter Monday seriously. We don't! Upon arriving at the Brandenburg Gate I was overwhelmed by the swarming mass of tourists snapping a shot of the enormous gate, a definite focal point in Berlin for every tourist to see but I'm no tourist! Admitting defeat to return early the next morning,  I was determined to get a much less disturbed photo of Berlins premier gate. Why did I choose Berlin? I was invited to an event hosted by Visit Berlin to introduce their Pink Pillow Hotel Collection in Birmingham. I was mesmerised by what Berlin had to offer and the quest for Curry Wurst simple had to be taken! I got a bargain for two nights in a 10 bed dorm at only €10 per night! Check-In Hostel was functional and served me perfectly during my stay in Berlin, I loved the fridge full of beer in the reception, it was a welcomed change compared with my previous hostel experience! Sure, Berlin had something to show me. 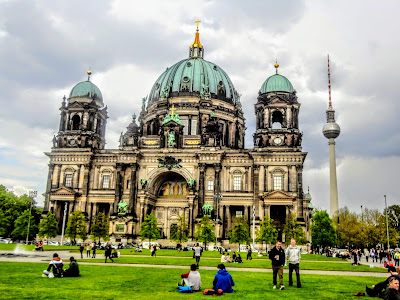 In hot pursuit for the lively centre of Alexanderplatz I stumbled upon the Berliner Dom, meaning Berlin Cathedral where I took cover from the rain! I had definitely brought the weather with me from Birmingham, UK! Captured to the right is Dom and the Fernsehtrum, a telecommunications tower that reminded me of the CN Tower in Toronto, Canada. Back to the Cathedral of Berlin for the rain decided to belt it down I took some time for reflection in the cathedral to light a candle or two because that's what I like to do. Taking what felt like a thousand steps took me to the viewpoint at the top of the mid-section of the Dom, which gave a great yet rainy view of Germany's capital city! Berlin chose me because I believe I was right on time! I have to say my knowledge of the German language wasn't very good when I first got to Berlin, I decided to stick to the basics of Hello, Please, and Thank you. OK? How I was loving Berlin!


It didn't take a genius to realise that Alexanderplatz was located just behind the Dom because my map told me so! I did feel typically tourist pinpointing the parts of the city I should head to next but I saw the typical tourists from America who didn't fail to embarrass themselves with their lack of travel expertise, I'm such a nice person! You're welcome! The Fernsehtrum led me to Alexanderplatz, an area where much development had stood still for the festivities of Easter. I found the telecommunication tower very interesting for it looked extremely retro but the whole Alexanderplatz Zentrum area looked positively concrete a stark contrast from the history that stood mere metres away on the Unter Den Linden. I had covered a whole new district of Berlin without realising it, I had made my way to Mitte! Easter brought a series of market stalls that mirrored the same that appear during the festive period in Birmingham. Yes, Birmingham could really learn a thing or two! 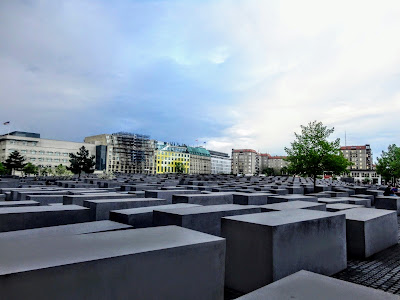 Moving out of the city centre on the S-Bahn train to an outer Berlin station that I didn't plan on stopping at but I trusted a train that was travelling in the direction of Spandau! I trusted the train because the Berlin transport systems baffled me with the different names, letters and numbers I knew that train would be 'Gold!' Moving back into the city centre I took a chance on Potsdamer Platz, an avenue of skyscrapers that had the brashness of a New York City business district so that impressed me. There was an enthusiastic protest taking place as I stepped on to the pavement opposite the business district, maybe it was linked with a car manufacturer? To the left is the 'Memorial to the Murdered Jews of Europe' a sobering sight for sure, some say that time is a healer so I saw the memorial site a fitting installation to come across during my time in Berlin. My first day in Berlin was so busy, but great! I had made up time!


My body-clock was starting to remember I had woken up at 4:30am that morning,  I pushed forwards to a part of Berlin town that goes by the name of Nollendorfplatz, for it had been mentioned by the ambassadors at the Visit Berlin event back in December 2013. I wanted to get my drink on but the day was catching up with me so I hopped off the train to take a look in a interesting shop where I found some goodies for sure, it was such a pity I had only packed a backpack so I was limited with what I could buy but I was happy with my purchase. I got this! If I venture back to Berlin I will definitely schedule that trip on a weekend for I had arrived on a Monday and I couldn't be sure if this German city would be raring to go for an all-night party? I had seen so much in my first afternoon in Berlin even though my two hour flight delay from Birmingham Airport didn't stop my frantic assault on Berlin town! Western Europe had surprised me once again! Berlin proved itself, it had its own beat! Ja! 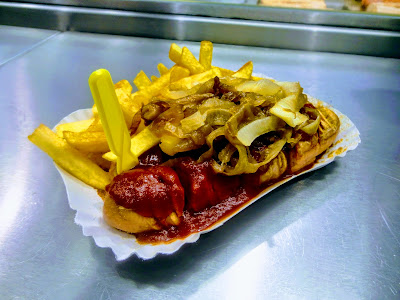 Replenishing my supply of Euro's I made a pit-stop back at my hostel before grabbing some food. I had been too wrapped up with getting to know Berlin I had forgotten to eat, my sausage sandwich from Wetherspoon's at Birmingham Airport had wore off a long time before I jumped back on the U6 U-Bahn line towards Alt-Mariendorf to find Curry 36! Getting off at Mehringhdamm only knowing to look for a bright red sign with the words 'Curry 36!' With a stroke luck I found my desired location, this German fast food counter looked identical to the photo that was displayed at the Visit Berlin event. I ordered two Curry Wurst sausages with chips and onions, it had been a long day at that point so I chose a half-litre bottle of Becks beer to complement my first proper German meal! I really loved the Curry Wurst, that Brat Wurst was the perfect choice to satisfy my hunger, I was already on the next hype BER!

From my delayed start to being faced with the masses at Brandenburg's gate I was happy to get some sleep ready for my second and final day in Berlin! The Berliner Dom was the calm that I needed and the perfect place to escape the rain, I hoped for sun the next day! I made it to Nollendorfplatz even though it was a brief part of my day I loved it even still! Germany proved to be a whole other state-of-mind that the media painted it to previously be so I felt blessed to experience such a positive day even if the lack of sleep caught up with me in the end. Curry Wurst has to be the one when in Berlin because there's no other taste combination quite like it anywhere else, well that's just my honest opinion! Spandau isn't just about the Ballet! It's still Gold! Checkpoint Charlie is great in the day but so much better during the calm of the night, those tourists are a pain in the neck! Berlin is buzzing, Berlin is brilliant! Germany will be on my wish-list for the future! Berlin, thank you next!