Serving It Up... Bodega, Birmingham!

I have been missing the Ironbound, Newark home for a while now. I wanted to find a link back to the Latin and South American vibe that I became accustomed to during my placement year in 2012. I stumbled upon Bodega, a vibrant and contemporary South and Latin American Cantina, so I made my reservations to try it for myself! Birmingham, I need more Hispanic food! Please? 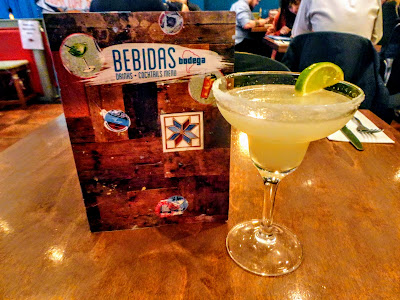 Just make mine a Margarita! Upon taking my seat at Bodega, I found out quickly that it boasted a very attractive daily cocktail happy hour from 4pm to 7pm everyday intended for all to enjoy! I might have been in Birmingham but there was a certain feel in the air, I could have mistaken my surroundings for a charming Cantina in Old San Juan, Puerto Rico?! Anyway, I loved my first cocktail in the form of a bitter sweet Margarita that certainly packed a healthy shot of Tequila for it tasted mighty fine! I noticed the drinks menu featured the word 'Bebidas' that means 'Drinks' or 'Beverages' in Spanish! Yes, I love a bit of Spanish because it makes things look more interesting and special! Priced at £4.00 for a refreshing beverage as pictured to the left I wouldn't argue with that one bit!? Bodega, Birmingham is located on the corner of New Street on Bennett's Hill, which is within a few paces from Birmingham New Street Station so making the last train home should never be a problem. @BodegaBirm is on Twitter for the latest. OK?

Quenching my thirst twice more with a Daiquiri and a Caipirinha I made the most of the cocktails that were on offer to me at Bodega, Birmingham. Ordering my meal didn't take much thought as I had already studied the menu beforehand, both online and numerous time I have walked past the restaurant on my way to New Street via Bennett's Hill. I took the plunge one Friday evening I decided I was going to be cultured by having a nice meal rather than getting inebriated. It's definitely a chore to find some quality Latin and South American food in Birmingham, or maybe I've been looking in all the wrong places? The waiters and waitresses were approachable and knowledgeable of the delights that were on offer. I should have really said 'Camareros y Camareras' which translates to the obvious in English translation 'Waiters and Waitresses' I think my knowledge of Spanish was returning? The Margarita and other drinks were talking! My student loan did not thank me for my splurge, but we all deserve treats! We do! 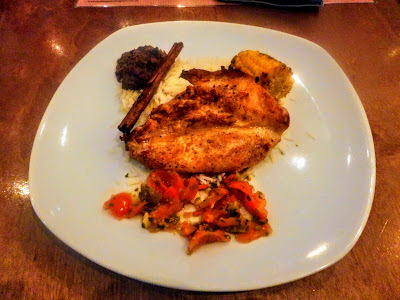 Choosing to begin my dining experience with the Beef Empanadas, which were really nice. I last ate Empanadas in Tarragona, Spain in July 2013, it was great to be reacquainted with that dish again! Captured above is what I enjoyed for my main course, named 'Pollo con Arroz' meaning 'Chicken with Rice'. Of course I visualised my usual Newark Brazilian favourite dish, lets just say it wasn't quite Ferry St. Barbecue standard with the portion on the smaller side. Served to me was a contemporary version of my beloved Newark street food, the flavoursome chicken tasted great with the cinnamon infused rice. Accompanied by some corn on the cob and black beans, my meal took me back to my Newark and Puerto Rico days for sure. I'm all spent out! Back to my meal it did not take me long to enjoy the whole portion that was presented to me, the infusion of Latin and South American flavours marinated together like a dream. Did my starter suit my main course? I would have loved a second helping but that brief memory was worth it.

I took my seat at around 5pm to a half full restaurant that was mostly made up of young professional types. Yes, Birmingham is branching out to offer trendy dining choices nowadays. I didn't need to wait long before the 'Cantina' had grew in numbers, chatty tables enjoying their wines and Latin American beers such as 'Modelo' that happens to be a Mexican beer. How did I find out about Bodega? I would purely say it was utterly by chance as I don't chase the usual chain restaurants all the time for its nice to try somewhere that doesn't pull in the masses, you get the picture? Did I not mention that the cocktails are immense?! I did! With my appetite satisfied by my starter and main course I was swayed between the 'Brazilian Carrot Cake' or 'Churros' so I needed to make a choice! The 'Churros' won the battle for desert and they tasted mighty fine! What was I doing having 'Churros?' I'll want to be back at Disney World next?! I'm entitled to a treat, that will be the end of that spark! Birmingham is cool but I miss that feugo! 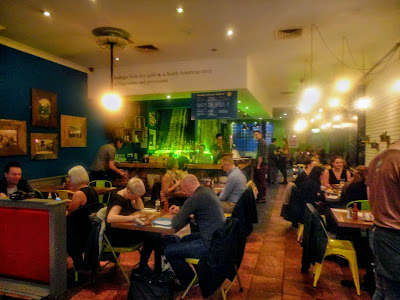 Moving away from the food served, I would have to say that the overall ambiance of the 'Cantina' was pleasant. With the appropriate music playing and decor I did strangely feel like I was back in Cafe Puerto Rico, a nice feeling for me to experience. Maybe an overstatement? I am sure. Birmingham's got some great restaurants that range from Chinese to South American so it's always tough to put a winner amongst all of the competition but I did really love my dining experience at Bodega, Birmingham. Captured to the left is the main body of Bodega's lively 'Cantina' please forgive the orb like lights for the actual setting exuded a romantic dim light, so I guess you'll have to judge that for yourselves! Need I be so careless not to mention the 'Sugarloaf Bar' downstairs from the lively atmosphere of Bodega's restaurant. The 'Sugarloaf Bar' offers an intimate Latin experience that can be reserved for special occasions. Sorry, I'm a poor student. Anyhow, I was sure that their extra bar impresses well. It was time for that bill, back to halls!


Bodega, Brum is definitely a restaurant I would return back to! I need to remember the key times for Happy Hour because I could do with a few more Margarita's in my life! So, I look to Birmingham to say 'Where are you hiding all of my student life?!' Being honest sometimes means that negativity can be present but I ate some lovely food at Bodega so I simply wanted to express those minor aspects. I hate to see journalists that just spout horrid and depressive things about a restaurant, I only eat at places that are nice so I guess that's just my luck? If I remember correctly the cocktail happy hour is from 4pm to 7pm? Don't quote me on that! Until then I'll just have to get a grip and find restaurants that bring that familiar taste a little bit more real. So, thanks Bodega for a really nice meal and bringing back some Latin and South American flavour back in my life! Muchas Gracias! and Muito Obrigada! Choose Bodega, Birmingham! I say have a liquid lunch or after work drink? Once I'm working it'll be another story! Bye, Brummie Bodega!