Birmingham Hippodrome... Singin' In The Rain: The Musical

Returning to Birmingham's Hippodrome Theatre for another musical fix for this month of March! That time around I had booked tickets to see the current UK tour of Singin' In The Rain. I'm sucker for a classic film that's been artistically crafted into a musical show, It that it was right thing to book my tickets for another show at Brum's Hippodrome! Oh, my student loan! 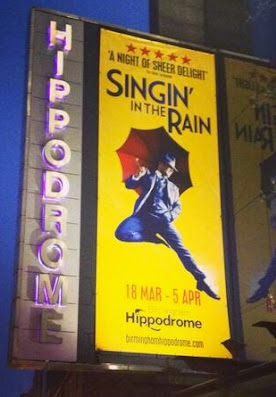 Typically the rain was bucketing down as I made my way to the theatre for the evening's performance of 'Singin' In The Rain!' With those rain showers, I knew that I picked the perfect night to see the show! I couldn't wait to see the musical because I just adored the film based in the 1920s, I was very excited for being a student can mean cultured evenings to the theatre because I'm leaving the stereotypical antics for another time. Captured to above is the ever-changing sign at the Birmingham Hippodrome theatre that displayed Don Lockwood, known in the movies as Gene Kelly. I had recently been to see 'Fiddler On The Roof' just the other week, with the heavy plot-line I decided that I wanted to see something more uplifting! Would my mid-week theatre treat match or exceed my usual night out on Hurst Street? O, it was a sober affair! I want to keep this balance because being cultured ain't a bad way to live life! On with the show!

Curtain up! I loved the show from the opening act that was set at Grauman's Chinese Theatre, Hollywood. I wanted to keep the image of the film in my head as the musical spectacle progressed in front of me! Cosmo Brown began with his hopeless personality of always getting over-shadowed by the main stars, but I knew he would have his time to shine! Ready and waiting the stars of the 'Dueling Cavalier' made their way to centre stage to greet us the audience, poised to tell his ramshackle of a story Don Lockwood and Lina Lamont presented themselves to their adoring fans at their glitzy movie premiere. The ensemble played their part well but I wanted to see it rain. Had I been transported back to the 1920s? I was sold by the first opening scenes for the acting and attention to detail was ace! Do I sound too positive about the show? No! I had been to that theatre in Hollywood twice before from the outside. Where was Faye Tozer hiding? 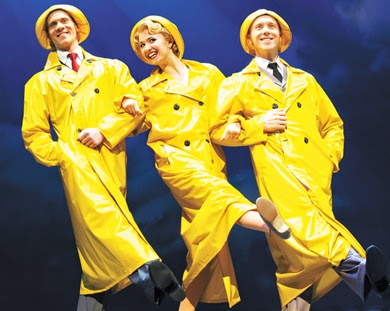 Where was the rain? The romance blossomed between Lockwood and Seldon, the momentum of this show only picked up the pace to reveal the next event! Lamont with her awful squawk of a New York accent was slowly silenced for the time being, but her plot would be announced within due course. It didn't take a genius to work out that a new edge needed to be carved for the fate of Monumental Pictures. The news from the 'Fan Magazine's' reported that Lockwood and Lamont would be engaged to be married but I just didn't see any genuine chemistry between those two starlets off stage. Warner Bros had stole the show, but something would turn up! I admit that I would have loved an accent portrayed by Lamont, a 'Tragedy?' Times were changing, the invention of the talking picture! Lockwood, Brown and Seldon all got thinking! Working into the night, they found something before sunrise! Singing 'Good Morning' the trio plotted to dub Lamont's voice over with Seldon's to save the 'Dancing Cavalier!' Let's play on!


New dance scenes burst on to the stage, sung to the tune of 'Got To Dance!' Somewhere and somehow the head honcho J.R Simpson had to agree to the new plan that the clever trio had concocted! Now, I did think that Cosmo deserved to get some credit for renaming the new show, I think that guy deserves a promotion! I wish you a very 'Good Morning' to you and you and oh you! Every 'Good Morning' has to inevitably have a few rain clouds for Lockwood wished Seldon a fond farewell before royally 'Singin' In The Rain' I shall not tell a lie for I witnessed real life rain, well as far as the Hippodrome could forecast! With little under fifty minutes to go until the finale I made sure I tweeted all about the show to the theatre in question and to the show's twitter feed. I must watch the DVD of the original movie at least twice now because the show and the film are just as good as each other. I want to see Wicked again but the tickets were berserk in price so I said no to that prospect! Back to the show, Lamont's bitterness impressed me much! 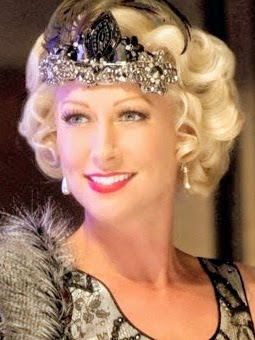 The curtain call beckoned, a few home truths had to be dealt with before the finale! The rerecording of the 'Dancing Cavalier' proved to be effortless, that was easy  for Seldon to adapt to the new measures but for Lamont a certain microphone got in her way! It had to be Seldon's way or the highway! Lina Lamont thought she got wise once she discovered her vocals were being dubbed over with Seldon's harmonies, citing her contract Lamont blurted a pack of lies to the magazine and newspapers to try and set some story straight or whatever way was good for her, well she was actually right for once! Cosmo thrived in his role, making his presence known during Lockwood's elocution lessons to sing 'Moses Supposes' alongside Lockwood to the vocal coaches dismay! Yes, the guy finally got a chance to prove himself! With my eyes glued on the stage, I loved every moment of this captivating show! I lived for 'Moses Supposes!' Those songs!


The show remodelled with Seldon's vocals worked a treat, but to who's disadvantage? All of that was about to be revealed for all to see. With the rapturous applause growing ever louder Lockwood and Lamont made their final bows at least five times before Lamont decided to deliver a speech, bearing in mind she was always forbidden from talking in public due to her squawk of a New York accent but J.R Simpson decided to let her go forth with her speech at her own peril, she didn't realise what consequences would become of her actions! Booed off the stage Lamont didn't realise her accent sounded so hard to bare! It was decided that Seldon would provide the vocals to an impromptu performance of a specific song made my Lamont. Seldon didn't approve of the decision but knew she sure that she served her contract in full. Oh!

I Loved 'Singin' In The Rain!'