Serving It Up... Staying Cool: The Rotunda, Birmingham!

Finding the perfect hotel or apartment can be stressful, so Staying Cool is the place to be! Birmingham's iconic Rotunda tower stands in the heart of Birmingham's city centre, overlooking every angle of England's first class city that won't stand for second place. Yes, it's more than just a room with a view! Staying Cool is the only way to find out Birmingham does it better! It does! 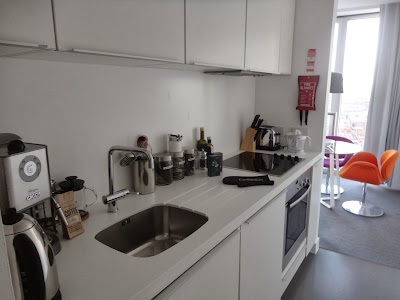 Drop those bags, forget about your stress! Stay Cool by making a cup of tea or even a hot chocolate from the wide range of complimentary options from the kitchen. I stayed in a 'Mini' apartment at Staying Cool, showcasing a perfectly balanced studio that boasts all of the necessary appliances and home comforts that are available. Take things easy by using the microwave for a four minute wonder meal or cook your own gourmet choice for the appliances located within the kitchen area? They are perfect for whatever the occasion may be? I'm more a microwave meal or take-out guy when I'm away but its all about choosing that personal option at Staying Cool. Are you more of a coffee person? Then brew yourself a cup of freshly brewed coffee from the state-of-art Gaggia Espresso Machine to quench that thirst. If you don't want to cook, dine at one of the many world class restaurants found in Birmingham? B, cool it with those epic Rotunda views! Being a student, it was a quite the contrast with my halls. Staying Cool, yes BH!


Fast forward to the morning after the night before, did Birmingham provide an eventful night for you? Either way I highly recommend that a glass of freshly squeezed orange juice will be the perfect cure to kick-start the day. Check the fridge for the key ingredients for a refreshing breakfast accompaniment. I brewed a pop of tea and had a bowl of muesli for breakfast. What would you choose? Hotel breakfasts can be so stuffy and can be a bit too early! Keep things at your own pace at Staying Cool Birmingham. Do you always forget to buy a pint of milk from the shop? There's no need to worry for there's always a bottle of organic milk sat waiting in the fridge for you, so a pot of earl grey breakfast tea can be enjoyed hassle free. Wake up to a flavoursome bowl of muesli as you watch the sunrise over Birmingham's city, something that you won't experience at any other Birmingham based accommodation! Stressing isn't allowed at Staying Cool, everything will work out. Those basics always make sense to have! Mine's a cuppa! 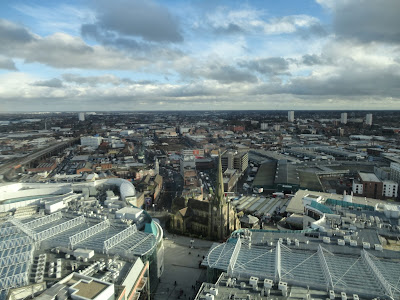 If things got a little crazy for you the previous night, fear not because you'll be good for breakfast! Be at one with Birmingham, city life can get quite hectic at times so let the view transport you somewhere calmer. This West Midland city is truly unrated for the skyline that Staying Cool presents is truly something to be proud of! Don't listen to what the whispers say! My studio apartment at Staying Cool was on the 19th floor, a head for heights isn't needed because the view is truly amazing. I loved watching the city pass me by, being relaxed whilst everyone else hurried around the Bullring shopping area of Birmingham is the way! When night falls Birmingham comes alive with a million lights, even the traffic looks picturesque! If your room faces the Bullring and Digbeth then look closely to the left side after sunset for I saw the lights of Birmingham Airport! Staying Cool at the Rotunda is definitely more than just an apartment. Staying Cool in Birmingham knows t's all about the view! I know where I want to be!

Getting to the Rotunda is easy, meeting in the middle both Moor Street and New Street stations make connections from other provincial UK locations effortless. If you're flying into Birmingham Airport there is a efficient rail service from Birmingham International train station to Birmingham New Street station so being a International traveler doesn't have to be a problem when considering Staying Cool at Rotunda, Birmingham. During the night time I saw those planes land from my 'Mini' Staying Cool room. Need I be so dismissive that Birmingham Coach Station stands mere minutes away from the Rotunda? For that reason, choosing National Express could be another transport option, missing out on a night or two at Staying Cool, Birmingham would be utter foolishness! If your stay isn't just for business then Staying Cool is at the centre of the action within walking distance to Birmingham's Chinatown and nightlife in Southside. Choose dinner at one of Birmingham's restaurants within the city centre core. Cool! 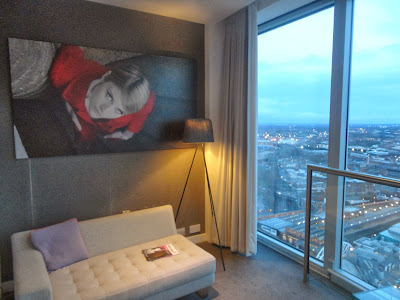 Staying connected is cool, every apartment is equipped with high speed WiFi internet access so keeping the world at your feet can be done. Rotunda is key! Lounging about is what has to be done whilst at Staying Cool, Birmingham. Like I mentioned before the views are something else but its nice to shut the world out and put the television on, so kick back with a cup of tea made from the kitchen and be entertained by a programme or two. Life can get too much sometimes so let's take some space to make things better? Hotels are for losers! Each apartment has Sky television, a DVD player and a range of board-games so staying entertained can be achieved without a doubt. I loved the freedom to enjoy the surroundings at my own pace, I forgot about my stresses during my time at Staying Cool, Birmingham that proved to be quite a juxtapose. Let Birmingham be your new first love! You should stay cool? If you get the chance, it would not do any harm to stay cool for a night or two! The choice is yours to make. Come on, B!


Located above is the contemporary designed living areas that look super stylish, talk is cheap but what I saw is honest and truthful. Birmingham's got style, so I can confirm that Staying Cool at Rotunda Birmingham instills the future of Birmingham first class transformation into a hip and fashion forward city of the future. Luxuriate in the style and sophistication of Staying Cool's carefully decorated living spaces, for the 'Mini' option, the bedroom and living areas act as one with a clever and cool partition that marries the bedroom and living space harmoniously. Keep it cool next time! Let's face it we like to dress in designer brands so why not decide to stay in an apartment that's equally en-trend? I think we all know the answer to that question. So trade in those tacky hotels for the rich and modern designs at Staying Cool, Birmingham! I wouldn't say it for fun! I truly endorse a stay at Birmingham's coolest address at the Rotunda! Of course, Birmingham will keep it cool! OK? Sure, Birmingham is better! Staying Cool like you should!

Are You Staying Cool?