Library Of Birmingham: The Next Chapter...

No longer does Centenary Square look like a huge site of construction for a new state of the art Library of Birmingham stands to write a whole new chapter for Birmingham. Praise is due but let's set things straight, a library is for quiet not for idle chatter and noisy, disruptive individuals, I will learn to value the 'shush' given by a librarian any day of the week! Sort it out! Come on, B! 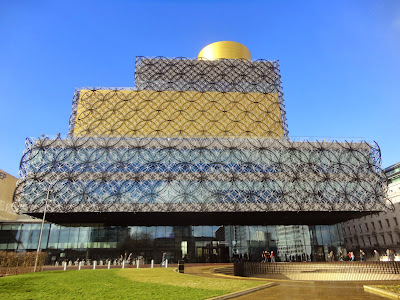 I've been meaning to publish a blog like this for a while but the weather has been rather dreadful in Birmingham and the rest of West Midlands. With a pleasant day yesterday I made my move towards Birmingham new library with the quickness! Above is the Library of Birmingham shining in all of its glory in the afternoon sun on a chilly February afternoon. I still think that this landmark looks fabulous five months since it was opened in September 2013. I do believe that the new Library of Birmingham has created a storm of interest and media attention that's attracted visitors from far and wide to view this new Birmingham landmark as a tourist attraction rather than a library. Birmingham is benefiting from a boost of visitors seeing this striking new library that has transformed the make-up of Centenary Square. Opened by female activist Malala Yousafzai voiced; "A city without books in a city without a library is like a graveyard". Birmingham better preach about its new library! Brum is forever changing! She is!

So, with Malala's words spoken Birmingham began a new era! Not forgetting Birmingham's Central Library that now stands with a question mark due to its future. After the new library has taken its place, what's the next step going to be? I actually love the Paradise Forum complex, it retains Birmingham's unique 1970's architecture that features a lot within Birmingham's city centre. It's quite unclear what the future of the complex will be that now features a Nandos and a Wetherspoon's amongst other public amenities. Can a library without books act as a viable part of Birmingham's future? The Birmingham I once knew in my fresher year has changed a lot, but I would say the new Birmingham is looking just fine! Whatever happens to the original library of Birmingham I do hope that the next phase keeps the integrity of its current architechural beginnings for its great to move forward with the modern times, but its never good to forget what once was! Tell it to the children! Reading is? Of course, reading is fundamental! Paradise? 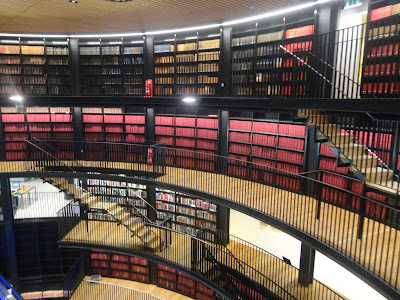 Books, books and more books! Birmingham's new library is remarkable, there's so much to see on the many floors, there's more than just one reason to visit. I joined the Library of Birmingham during the first week it opened, making my contribution to this new addition to Birmingham. The circular design with the impressive bookcases that are filled with unknown books really impresses me much! I'm currently reading North Korea: Undercover, a investigative analysis of modern day North Korea that looks under the surface of the world's most secretive countries. I'm not going to go into the facts of this read for the DPRK holds some guarded secrets. Aside from my current read I have to say that the Library of Birmingham hosts much more than just the expected titles for I saw many visuals aids that definitely diversified my visitor experience. During this modern age there's more to life than just books? I'm not one for reading all the time, I am a lover of technology without a doubt. Each person has their choice.

If I needed to study I would choose to book a study room because I like my quiet! The popularity of this new library has created something of a frenzy! Birmingham's newest library hosts an area that I just love! The Library of Cultures puts everything into perspective for the ArtPop style displays of the famous playwright William Shakespeare really caught my eye! Amongst the paintings and exhibits I also love the videos that are projected onto the walls, depicting past events in Birmingham if I'm not mistaken. Need I be so careless not to mention that the Repetory Theatre has been overhauled as part of the joint development of the new Library of Birmingham. I had the opportunity to attend a promotional event at the REP Theatre that was hosted by Visit Berlin and OutNow Consulting. Birmingham receives its share of unfair negative press but I know that this city is world-class! Those haters can move on for Birmingham is a first grade city that deserves a little respect! Yes, the new library has cleaned up Centenary Square! 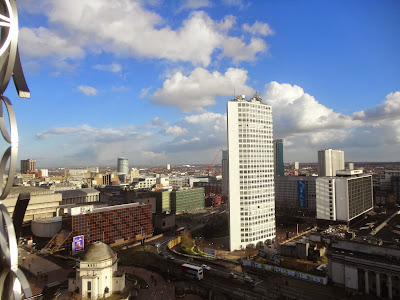 Reinvention is the ultimate key! To the left is the view from the Secret Garden, a panoramic view of Birmingham's progressive skyline  that the city should be proud of! I seriously got lucky with the weather for the intervals of rain had passed for the time I was taking my snaps of the vista from the Library of Birmingham. I saw as far as the Rotunda, I was happy with that view. I have faith in Birmingham for many reasons! Many say that Birmingham doesn't tick all the boxes to be a credible city compared to London, I would argue that Birmingham is a unique city with a lot to offer and enjoy for local Brummies and international visitors alike. I believe that the new Library of Birmingham is a catalyst for change to bring a brighter image for this city. I know all my chat is very complimentary I'm just stating my honest opinion about this subject, I can be judgmental but that emotion is just a waste of time! The library looks slick and modern, just the ticket to counteract that concrete lump that has been such an eyesore for those years. It's truth!

The next chapter of Birmingham's new library has almost been completed, for the books that stand present on the shelves will be enjoyed for a long while yet and the face of Birmingham's Westside has been transformed to a new level. The next phase of the Midland Metro's current extension into Birmingham will bring the new Spanish trams to Centenary Square, maybe bringing more people to the Library of Birmingham? Who honestly knows? I would have to say that Birmingham's new library is more than just an ordinary place for books for its become a whole new talking point that's hopefully reinvigorating Birmingham's pulling power as a reputable and attractive tourist destination?! Books are books but this library is creating a positive reaction for tourism within the region! I'm just a travel blogger that always tries my best to report real and honest experiences from wherever I am! Who knew that Birmingham's new library would become an icon? Reading is what? Reading is fundamental! Tell it to the children!

The Library Is Open!