What love is eternal? Eternal Love happens to be a darling and captivating play that's currently in the middle of its 2014 UK Theatre Tour. This 12th Century inspired show stops by at Wolverhampton's Grand Theatre from Tuesday 25th of February 2014 till Saturday 1st of March 2014! With a little lift, Wolves has still got it! Do you believe in life after love? I don't think so! 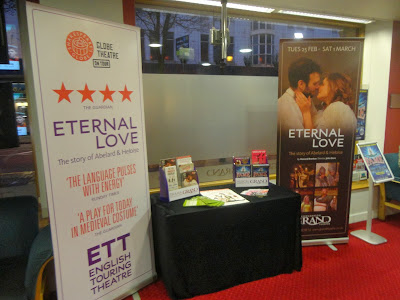 How did I get the chance to see such a heartfelt play? I'm a blogger, so I was approached by the Grand Theatre, Wolverhampton to be part of their 'Tweet All About It' programme. Jumping at the chance to branch away from my degree studies for one night I accepted the challenge to Tweet to my hearts content at Wolverhampton's Grand Theatre. It gave me something to during the week, after my lectures finished and I was ready, I jumped on the train from Birmingham to Wolverhampton. Meeting with other Bloggers and Tweeters proved to be like a breath of fresh air as I conduct my blogging work in an independent manner so it's always good to embrace a new wind of change. To the left is the promotional stand for Eternal Love, a play I had not previously heard of before that evening on the 25th of February 2014, let's just say that us Bloggers and Tweeters were excited to see the show! The last show that I saw at the Grand Theatre, Wolverhampton was Cabaret! Something different for sure, was all good with me! Yes!


I want to applaud the Grand Theatre, Wolverhampton for welcoming such a play to its theatre and to the city for us local folk to enjoy. I been a theatre-goer at the Grand Theatre since I was a young boy to now the age of 23. Musicals are great but breaking away from the norm is even better, let's enjoy this carefully crafted production that goes back at least 850 years into the past. I have faith in Wolverhampton to rise up to be different, let's show everyone what Wolverhampton is made of! Back to the show I suggest you keep reading for Abelard and Heloise portray something on the lies of a turbulent and lustful romance that's not meant to be, so see this show for yourself because as they say talk is cheap! Let us celebrate more shows like Eternal Love by the English Touring Theatre company to make an appearance at Wolverhampton's Grand Theatre! It's now 120 years young! Age may of be a number but with the recent face lift this Wolverhampton theatre can turn back time! On with the show! Alright? Taking a peak backstage it was great to get a glimpse of a theatre without any audience to see some hidden parts from the love affair that is Eternal Love. I got a look in from the orchestral booth to see if the view from up above looked better compared to the usual view from the seated stalls and circles. The view impressed me, I never truly realised how dazzling the Grand Theatre looked for the show! During the backstage tour I saw a range of costumes that had been fashioned according to the 12th Century period of Abelard and Heloise's lustful existence. There was even an edible book and a range of other peculiar looking props that I'm sure all had a perfect part to play within Eternal Love. Being backstage reminded me of my time performing at the Grand. After marvelling at the stage to then learn that the two trees that stood in the middle of stage were from Blenheim Palace in Oxfordshire. Abelard and Heloise's story entertained me, it was like some 12th century entanglement. Whatever it was, I enjoyed the show! Quick, quick!

Retreating to the University of Wolverhampton suite our eyes were opened to the story of the historical beginnings of Abelard's 12th Century existence in Paris, France. Josh Roache, a representative of the English Touring Theatre conducted an insightful presentation regarding the background of the ETT and the thought process behind Eternal Love. A quirky fact I learnt was that the writer of Eternal Love, Howard Brenton actually wrote the television series Spooks. I sat with my notebook and pen, listening to each question and the speech made by the representative with great interest, I even asked my own question to contribute something to the talk. Blogging and using Twitter has got me some great gigs, I wouldn't mind another theatre gig! Throughout all of this excitement I never forgot to tweet like mad, it was the only acceptable time to use mobile phone whilst someone was talking. I loved my seat, I always sit way up! Bring on the show? It was brilliant to see something different at Wolves Grand! Keeping changing it! 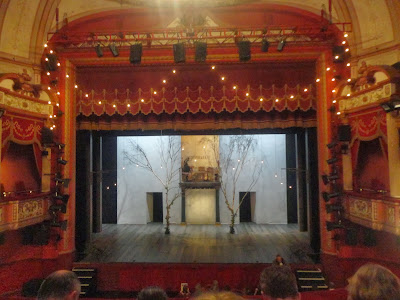 Eternal Love transformed 2014 Wolverhampton into an interpretation of 12th Century Paris! Now, Paris is a place that I long to visit! That is for sure! Oops, a little of topic there! The love story began with a range of beautifully sung French melodies. Questioning authority a brash and young thinker bombarded the supposedly wise member of the Notre Dame, that thinker had to be Abelard, the man with the mind. The first act introduced the blossoming love affair between the philosopher, Abelard and his pupil Heloise for their courtship was disguised within the illusion of insightful teachings. Religion is questioned for nothing is ever yes or no when the thoughts of Aristotle were exercised by Abelard and his pupils. Could Abelard and Heloise keep their secret love hidden? Even in the 12th Century everyone loved to gossip, so word on the street was that a forbidden love connection had been formed between a teacher and his pupil for idle chat can spread like wildfire! I wanted to see more! Outside of London, theatre is still great!


Canon Fulbert, Heloise's uncle had been alerted to a strange report made by three unsuspecting characters, had his niece Heloise been up to no good? Like with all good times something has to come to an end, but for these star crossed lovers would the end be so sweet? Smuggled out of Paris, Heloise was bearing a illegitimate child who would be named Astrolabe, she made her way to a remote farm to retreat for some time. Time should be a healer but with a few years past a shock wedding occurred by the compost heap, resulting in a mutiny that left Abelard emasculated for sure! Sister's do it for themselves for Heloise reluctantly joined a local convent for her bad habits had finally caught up with her! I suppose all is fair within love and war? In the end their love shall remain eternal. For once in my theatre-going days I hadn't ever though about seeing such a performance like Eternal Love. I wouldn't say no to another Shakespeare like show again. Well, that was a change from the usual week night, thanks WV1!