Serving It Up... Coast 2 Coast; Birmingham! 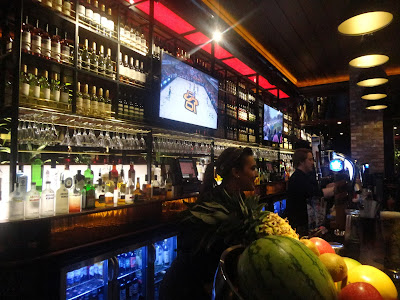 Coast To Coast Brum brings the energy of a New York City sports bar! Enjoy a pre-dinner drink or enjoy some appetisers because its all about you at C2C! Catch the big games from the comfort of the bar area because it serves up a feeling of style and sophistication! Order a freshly made cocktail from the bar and trust the bartenders for they know their liquors! Better still it doesn't cost you the earth to enjoy a tantalising mixed drink for Coast To Coast, Birmingham has everyone's budgets in mind. First impressions count for something, upon my visit to Coast To Coast, Birmingham I received a warm welcome, I was assured that my table would be ready in less than fifteen minutes. Making mine a Mojito, I spent my first moments at the bar surrounded by the lively atmosphere that detracted away from the cold dreary February weather, I could have been in NYC due to the familiar setting! Brum, I say C2C is for right now!

Birmingham's Broad Street and BrindleyPlace are both home to a range of lively and dynamic entertainment and hospitality venues. I would have to say that Coast To Coast American Restaurant and Bar has brought something new and exciting to this part of Birmingham! Broad Street has been through the mill but its slowly getting back on its feet, it's all about the staying power of a brand for this entertainment hungry part of Birmingham to serve. The contemporary design of this American infused restaurant puts Broad street back on the map! I would have to say that variety is definitely the spice of life so change that Brummie Balti for a hearty portion of American soul food! Forget the usual American choices like that shall not be named but you know who I mean, nobody want's it to be Friday everyday!? We wouldn't get anything done let alone have the means to enjoy ourselves?! At the end of the day you are free to live your life, do what you want! Mine's a Mojito! C2C, Touchdown! 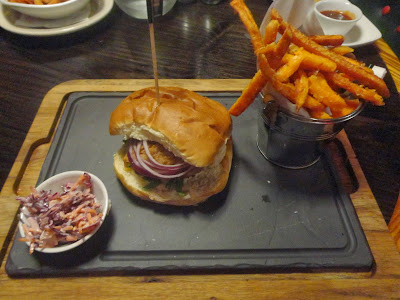 Feeling hungry? Believe me, I knew exactly what I wanted to eat. Choosing the Pulled Pork Burger served with homemade Sweet Potato Fries with Coleslaw, it made the perfect combination for a Saturday night treat. Captured to the right is my flavoursome and eye-catching meal served that was on a wooden board, its all about that extra touch at Coast To Coast, Birmingham. I did take take care to capture my meal in the best way, I must say that my burger bun wasn't meant to be a soft bun so I was served exactly what had been printed in the menu. Accompanied by my friend Kelly, she enjoyed a hearty serving of the Sizzling Fajitas that were cleverly served with a selection of accompaniments such as; freshly prepared Guacamole, Cheese and Salsa. American food has many hidden depths. Remember, American food tastes better at C2C! Sure, Coast To Coast did their research! Yes, Brum! From Hollywood to the Empire State, this American Restaurant stays true to its aim to serve fresh and authentic American dishes within a modern and dynamic environment. Take note of the countless mementos that took me right back to New Jersey! From Coast To Coast its not difficult to realise that this cross-country dining experience can be much more than just a meal! Enjoy your time with the non-stop supply of iconic American anthems from a playlist that took me back to the Hard Rock Cafe, Times Square in New York City! It's almost been two years since the day so my Coast To Coast, Birmingham experience ensured those memories hadn't faded away just yet! I had the opportunity to take in the energetic and fast-paced environment of the Saturday night service at Coast To Coast, Birmingham, nothing was rushed at all. Our server Luke Vernon had an excellent product knowledge and served us with humour! Thanks!

Myself and Kelly felt content with our main courses it was time to choose our deserts, a task that was very simple! I didn't need to be briefed what the choices were. The desert menu didn't exist at Coast To Coast? Our server, Luke explained our options in an animated fashion! I made a winning decision by choosing the Peanut Butter Cheesecake because it was a winner! My Cheesecake was served with Honeycomb Ice Cream and Whipped cream, it was truly divine! Kelly dared to chose the Chocolate Brownie that was also served with the perfect accompaniments, we equally enjoyed our deserts at Coast To Coast Birmingham. We decided to ditch the hot coffee, so we indulged in an iced Baileys latte that wrapped up our Coast To Coast, Birmingham experience just at the right level! Be mindful when making your reservations because Coast To Coast can get very busy! No, it's no secret that you're going to love this Birmingham Broad St restaurant! Thank you, Coast To Coast Birmingham!

I Will Be Back For Breakfast!