Fifty shades of what? No, I've not read those books, neither do I ever want to! Please, I'm no schmuck! I'm talking about the fabulous fifty shades of New York City! From my time living only a heartbeat away from the Big Apple I grew a greater appreciation for the hidden and less popular parts of this insane yet ever endearing North American city. So, are you ready? Let's go! 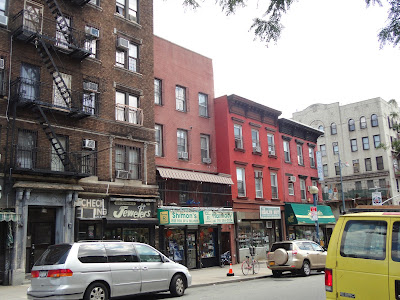 Shalom Williamsburg! If you haven't heard of Williamsburg then I'm not going to be concerned because this Kosher community took me a lot of searching to find. I didn't even have a 3G enabled mobile back when I visited the home of New York's Jewish Hasidim, so I had to rely on a helpful passersby due to my pre-trip research not working out. Lee Avenue is where it all happens, it was a hype of energy for sure with its bustling businesses that all abide by Kosher law. I had watched countless YouTube videos about the Hasidim living in New York City before my visit, especially in Williamsburg so I was very intrigued to rewrite the tourist guide and see a slice of Jewish life in New York City. Captured above is the gateway to Lee Avenue, a road that took me by surprise for sure, it was unlike anything I had ever seen before with its Hebrew billboards I was taken out of my comfort zone! No tourist maps were needed or allowed because I don't like them at all! Times Square is cool but I wanted that Brooklyn heat without question!

Making my way from Newark to the heart of New York City's Jewish heartland, the journey wouldn't of been as chaotic if I had started from Manhattan but I loved the adventure! I didn't see a McDonald's restaurant or any other American chain until I made my way back to Manhattan later that day. Lee Avenue really shows how Kosher everybody lives in that side of Brooklyn, modest clothing is the way forward. Mothercare would have a field day if they managed to set up shop in this part of Williamsburg for each Jewish woman that I saw had a baby in a pushchair, whilst other ladies had multiple children with them, I guess that those Williamsburg families are the true reason for the Jewish baby boom! Frankel's Kosher Supermarket provided me with my lunch that day, I ate Kosher snacks for the first time from a 100% Kosher mart. Trusting New York City was the only way that I was ever going to see such a closed neighbourhood during my time in Williamsburg, Brooklyn! Procreate, be fruitful! Mazel! 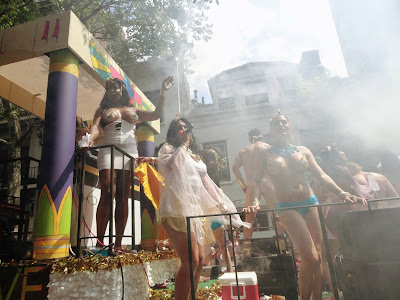 Greenwich Village, it's all very kitsch and quite camp but that's just fine with me. If I could have my time again living in America I would live in this part of New York City! Who know's what the future has in store for me? Back in March 2012 my co-worker Sharissa told me about the wonders of Greenwich Village, those words painted a picture in my head for sure! Jumping off the PATH at Christopher Street little did I know that this side of NYC would hold many memories for me. My first afternoon in Greenwich Village was absolutely darling! I found the many men's fashion boutiques to be so en-trend, I went to Rag & Bone, I parted with $70 for a turquoise tank top. I think the dreamy looking shop assistant stopped me dead with his good looks! Taking the PATH from Newark to that trendy part of the city gave me somewhere to have a break from the hard streets of Newark, New Jersey. Christopher St, who? That camp neighbourhood hid the Stonewall Inn from me, I was blinded by something! I'll make it back!

Fast forward to May of 2012 I returned back to Greenwich Village, I made my way to Christopher Street to find the perfect spot to watch the NYC Pride March 2012! I was accompanied by my friend Dean, he was so cute! That occasion was my very first Gay Pride event so I feel very lucky that I spent that time in New York City! Cyndi Lauper was the Grand Marshal, I guess girl just wanted to have some fun? I randomly made another visit on a beautiful August morning that I should've been resting, my hectic work schedule had me exhausted but when I awoke at 7am that sunny morning, I pushed my tiredness away to make it to the city of New York! I remember eating a really good slice of pizza from a crazy looking pizza takeaway on the corner of Sheridan Square and Stonewall Place, it was great! Greenwich Village had become my happy place, hoping over the that side of town always kept me centred. These experiences won't ever leave my heart or mind! I'm hungry! Let's go Downtown? Yes, pick it up! See you, B! 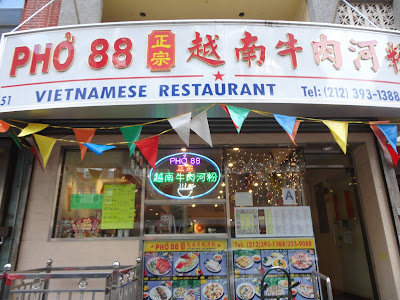 你好! Chinatown New York City broke the mould for me, it looked nothing like its depicted in the movies! It was much more gritty! Making a random visit in February 2012 with my fellow intern and friend Paolo we found Pho 88 Vietnamese Restaurant. Located above is that very restaurant that served up some very interesting culinary delights. I has not had that kind of food before, being Vietnamese! Chinatown, NYC lies around the Canal Street area not too far from the Manhattan Bridge and the Downtown NYC. It was mad to see all of the bag and watch stalls amongst the many Chinese restaurants, I loved it but I always felt the need to be cautious at the same time! I found a great little comic shop that sold special edition Pokemon cards, the child within me influenced a rather surprise purchase that just had to be made! There's nothing quite like the edgy streets of New York City's Chinatown! Embrace the shade, I know that New York City wouldn't wanted it any other way! That Vietnamese was fire good!  I would be back! Yes!

During my time discovering New York City I would have to say that Chinatown has a crazy feeling, a sense of activity and excitement could always be felt during each visit. I learnt to further trust the streets of New York City and be safe, as time progressed I was becoming more and more familiar with the NYC Subway, so getting to and from this part of NYC didn't prove to be a stress at all! Upon my final visit of 2012 I enjoyed another delicious meal at Pho 88 Vietnamese Restaurant, that final meal wasn't any ordinary meal for it was Christmas Eve night, I won't forget that visit for a long while. To celebrate my stateside Christmas Eve I found a great Bubble Tea cafe that were selling two medium Bubble Tea's for $2.50! NYC showed me to enjoy my first Christmas away from home! From my first visit to Chinatown NYC to my unplanned discovery when I found out that Chinatown sits at the foot of the Manhattan Bridge, this side of town is one of my fifty shades of NYC! Trust me, NYC was the one for me! Oh, those 50 shades! 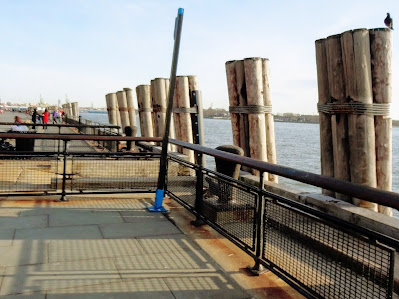 Battery Park throws the final form of shade in this NYC instalment, I had best get this shadery started! Desperately Seeking Susan is one of my favourite films, so when I made it to Battery Park I was simply lost for words! No, shade because I was looking for 1980's 'Get in the Groove' Madonna along that riverfront! Throwing another serving of shade I have to proclaim that the Lady of Liberty and Ellis Island can be seen within the distance from Battery Park from where I was standing. During that Battery Park moment there was so much going on that I just didn't know where to look! Little did I know that my blog name 'Desperately Seeking Adventure' would take form after that NYC day of discovery within the Downtown! Talk about fan-girling, I was living for the Material Girl! I love Times Square but Battery Park and the Downtown area had some serious character during those formative moments! It was like a story was being told to me in real time motion, like yes! I was getting my life in NYC! In that groove it was divine timing!

Broadway and Times Square had my heart, I visited that NYC tourist trap during my very first day of sightseeing in the city. I loved my life each time when I would visit Times Square, the lights had me gagged during the nighttime. Choosing to be brave, I challenged myself visiting places like Queens and The Bronx rather than repeating the tourist appropriate streets of NYC's Midtown. During September 2012 I got my tickets booked up, taking my seat at the Marquis Theatre to see Evita was the right thing to do! With Ricky Martin as the big name in the show, I had to see him playing the part of 'Che!' I have lost count, fifty shades or more I know that my year spent dipping in and out of NYC life needed no justification. All I need to tell you is that NYC certainly has many different shades! I know that I will make my sweet way back to the Big Apple, I'm not stressing because it will all be about divine timing. From Manhattan, Brooklyn then to Queens! I'll be back soon, but until that sweet reunion, please remember to stay shady!