Birmingham just celebrated Chinese New Year! Southside Birmingham said 'Gung Hei Fat Choi' to the year of the horse! Let's work hard to achieve our goals this year and be determined for its my year of the horse! Let us all enjoy one great day of celebration in Birmingham's Oriental heart! Bring on the Dragons, Bubble Tea and Dim Sum already! 伯明翰, 恭喜發財! 加油! 走吧! 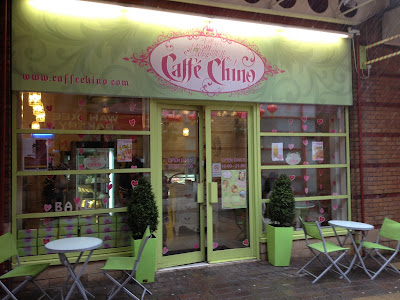 Making our way to Chinatown in Southside we patiently waited for the awakening of the dragons for the new year, but we must have read something wrong for the showcase was announced to begin at 12:30 pm. Getting out of the cold weather and away from the building crowds we retreated to Caffe Chino for a HK Style Bubble Tea, that did just the trick but I always have to have my Bubble Tea cold. I had never seen Caffe Chino so busy, it was usually chilled out and calm, we would usually be able to listen to the Cantonese music and chat quietly. It was Chinese New Year after all, it was a hive of activity! I wasn't pleased to hear some people order English Tea, its an Oriental Bakery not Greggs! If I was the couple having English Tea I would have exchanged it for a steaming pot of Oolong Tea! In the spirit of the new 'zodiac', a horse looking figure gave leaflets out with the Arcadian. Good fortune to you, Birmingham! The horse is my Lunar New Year zodiac! Be nice to me otherwise I'll kick you! 恭喜你发财! Let's get rich!

Tea for two? 是的，让我喝一杯奶茶! As we both enjoyed our Bubble Tea I couldn't help but notice that Cathay Street was progressively growing busier with excited Birmingham folk who were ready for the festivities. I always make tracks down to Chinatown in Birmingham, whether if its for a lovely meal or to pick some groceries from the Day In Supermarket. I would like to say I felt comfortable with Birmingham's Chinatown! I had never before celebrated a Chinese New Year, so I was very much looking forward to the day ahead to learn new customs, things that I might need to consider when I make tracks closer to China. Each visit to Caffe Chino takes me back to NYC, its one of my fondest memories of my placement having Bubble Tea on Christmas Eve 2012! A flashback maybe? Me and Kelly watched the clock, we really wanted to secure a good view ahead of the dragon dancing! 谢你 Caffe Chino! I'll miss you when I leave Birmingham! Sure, Southside's my favourite part of Birmingham! 南苑, of course it is! 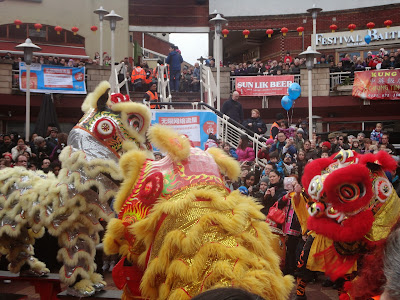 Keeping calm and carrying on we found a space that gave us a good view of the performance area. As the time grew closer to show time the crowd grew some more and the space became very restricted but after some restructuring of the crowd everything settled. To the right are dragons in all of their glory, I loved the whole routine as I felt part of the Chinese New Year festivities! I just want to be in Hong Kong already, I have some time to wait still! Back to the dragons, I loved the fast paced arrangement that was played, it definitely detracted away from the cold temperatures but no rain fell so that was sign of good luck! The sound of firecrackers and fireworks could be heard at the finale of the routine, welcoming in the New Year with the unveiling of the New Year red sign that read in both Cantonese and English. Cantonese would have been a handy language to know that day! I'll learn Mandarin too! I plan to work on the Mainland of China or in the territory of Hong Kong in the near future, I will! 新年快乐!

The presenters made their speeches, Kirtsy Lo greeted the crowd in English and her co-host Jimmy Chun spoke in Cantonese after all it was Chinese New Year! The Lord Mayor of Birmingham was present amongst other notable figures such as a council member there was also a number of representatives from the Chinese Festival Committee to make their respected speeches. The sponsors of the Dragon were the International phone provider Lebara and Tiger sponsors were the Genting Casino. I always pride Southside for being a diverse and vibrant part of Birmingham, its my favourite part of the city! I look back at this part of my Chinese New Year experience in Birmingham with a smile upon my face as it was something different to do, for that I'm thankful. Best of all without Kelly there wouldn't of been any photos for her knack of photography came in handy within the crowds. With the beat of the gong the Chinese New Year celebrations were in motion! Hi Horse! Did I say it's my year? 伯明翰, 马年快乐! Get it right! 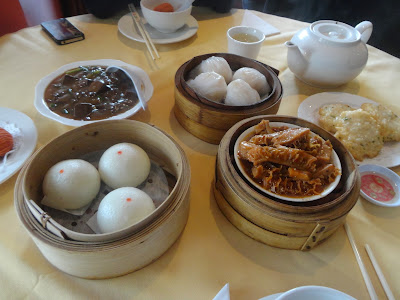 Ken Ho, Birmingham was the one! Kelly chose our restaurant as she knew the food would be served to an optimum standard. We were hungry! Kelly also took care of our food order for she made some surprise selections that I would soon find out what they tasted like. I trusted Kelly implicitly, I encouraged her to make her choices adventurous ones for our lunch order at Ken Ho. We choose to eat Dim Sum, a range of special dishes that could literally have fed the 5,000! Amongst the Custard Buns to the left I would find out that the dish next to Buns happened to be Cow's Stomach in a spicy chilli sauce, I actually enjoyed this alternative dish because I'm strange like that! Located to the top left is Pig's Blood Jelly, another dish that rewrites the book when it comes to the British way of a Chinese meal. I liked the Pig's Blood Jelly for it was flavoursome and was served in a Black Bean like sauce, yes really! I just love to try new foods! Our other dishes were Calamari Fritters, Steamed Prawn Parcels and Sesame Prawn Rolls. Oh!

The Prawn Rolls were sublime, jammed pack with steamed Prawns that tasted so much better than the takeaway option. We also ordered one final item that surprised my taste-buds once more, choosing a fruit based pastry that contained the Durian fruit, they tasted very good! I actually love Dim Sum and pledge to sample some more outlandish dishes in Birmingham this semester or make sure I have lunch at one of the Malaysian kitchens in Chinatown. I would like to think that my taste tolerance is widening for I want to sample as many barmy sounding snacks and dishes once I make it to Asia and also parts of South East Asia, I will Desperately Seek that taste Adventure! Chinese New Year was great, I loved my first day of celebrating the year of the horse! I hope that this Chinese Zodiac shows me the way to greater things and if people get in my way I'll give them sharp kick just like a horse! I'm not joking about the kicking part! Another ace day of discovery in Birmingham! 伯明翰, giddy up! Next year in China?