Serving It Up... The Jekyll & Hyde Victorian Gin Parlour, Birmingham

Yes, I love Gin! I wanted to do something different because I don't make enough time to be a cultured soul, I always choose a night out on the tiles compared rather than having a darling meal out. After seeing a link on Twitter I booked a table at the Jekyll and Hyde for myself and my friend Kelly. We indulged at Steelhouse Lane's own Victorian Pub and Gin Parlour in Brum! 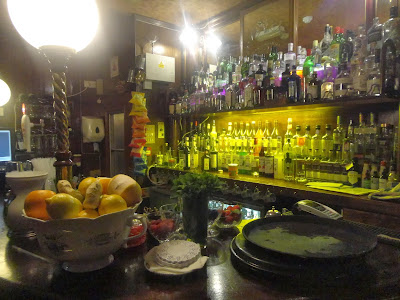 Reporting for our 7:30 pm reservations we took our seats, I must admit that we were bewildered and quite amazed by the bar within the quaint Gin Parlour after seeing the vast amount of Gin's that were on display, they all looked delicious! Like I have previously mentioned I had first seen the 'Gin Parlour' at the 'Jekyll and Hyde' from a tweet, so I had high expectations for the Gin as I can't get enough of the stuff, being a student its quite rare to see one of our kind having a Gordon's Gin and a mixer for pre-drinks! Anyhow, I still couldn't get over the bar,  the presentation was second to none! The bar downstairs was abuzz but that wan't our intended location, we wanted the Gin Parlour upstairs! Our servers Kate and Kathryn both knew their stuff when it came to Gin and the different variations for the speciality brews and cocktails, that's what I call perfect product knowledge! Oh, Kelly agreed with me on that topic!

We decided to dine and drink that night because it would have been rude not to have done any different! Should we have a bathtub of Gin first or should have we ordered a speciality cocktail? I had seen many photos of the fancy Gin drinks that I wanted to try, but on a student budget it's always a challenge! I must say that I would have never expected a place so grand to be located with Birmingham's Business District but I guess Birmingham has many hidden depths? Brum's the best! I shall be turning to Twitter for any future dining inspiration, those twittering blue birds have been tweeting all the right stuff! Book in advance to secure your table at Jekyll and Hyde because things can get really busy on a Friday and Saturday night. I always thought I knew Birmingham better than I did before I found out about Jekyll & Hyde's Victorian Gin Parlour but the rest had already been done. I wouldn't mind another Gin infused drink like I had at Jekyll & Hyde, I'll always love Gin! Don't be a fool! 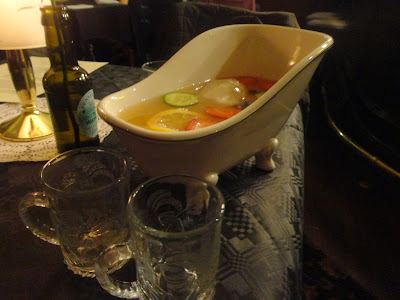 Our first Gin infusion had to be a bathtub of Gin, captured to the right was our first wondrous serving at the Jekyll & Hyde. Madame Geneva's Bathwater was served in a darling ceramic bathtub, it was a sight that neither me or Kelly had ever seen before! Our bathtub sharer was laden with an infusion of Bols Genever Gin, Apricot Jam, Peach Schnapps, Rose Water and Lemon Juice. We had barely thought about ordering any food yet so we took some time to take the plunge, enjoying each glass of our sumptuous Gin sharer! Only costing £25.00, so we split the price to £12.50 each so our student loans didn't get so damaged. Our experience at the Jekyll & Hyde Victorian Gin Parlour was showed us that Gin should be savoured and measured to a sensible level. To be fair, the bathtub tasted much far too good to savour! Birmingham's never looked so classy to us students! OK, be fancy at the Jekyll & Hyde near Snow Hill Station?

We had enjoyed our first ever Gin bathtub and by the looks of things it was going to get even better! The overall ambiance of the Victorian Gin Parlour was simply lovely, the attention to detail with the design was effortless! I honestly felt like I had been transported back to a Victorian time, now I would have loved to of seen Birmingham during the reign of Queen Victoria! Kelly agreed! I cast my mind back to my time here in Birmingham as a student and wonder for a while to think why I had never stumbled upon this charming place sooner? I suppose Gin can be enjoyed in a more civilised way rather than knocking back several treble measures before a night out on the town! Gin is done differently at Jekyll & Hyde due to the team knowing their varieties of liquor. No, I hadn't found anywhere else in Birmingham that serves Gin in a miniature bathtub, its kudos to Jekyll & Hyde, Birmingham! If you want to experience something more opulent then make it the Jekyll & Hyde, Birmingham! 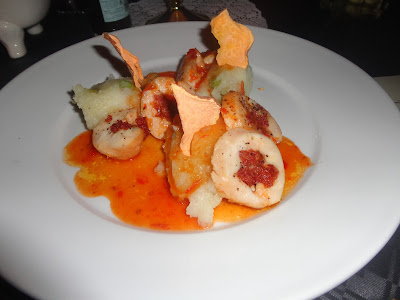 Our purpose at the Jekyll & Hyde wasn't just to drink Gin. No, we were ready for some lovely food! Branded the 'Eat Me, Drink Me' themed night at the Victorian Gin Parlour from Thursday through Saturday, Gin and food could be enjoyed as one exquisite experience! We refused to miss such an opportunity! We both enjoyed some rather delicious food that Friday night at The Jekyll and Hyde! Choosing two courses for £12.50, myself and Kelly felt that it was necessary for us to stay away from the desserts because the Gin provided enough of a sweet escape for us! Both choosing to start with the Home Smoked Mackerel fillet, it was served with a rustic arrangement with a Tomato Confit that was also accompanied by an olive ciabatta and parsley on the side. Our starters were amazing! We both agreed that we hadn't eaten such good food in Birmingham in ages! All this talk about food has made me feel hungry!


Through all the Gin we ordered we waited patiently for our main courses, the Victorian Parlour was filled with lively chatter. To complement our starter we both chose the Chicken stuffed with Chorizo and baked Brie, both was served with Scallion pureed Potatoes and Sweet Potato chips. All food served was flavoursome and the portions reflected the deal that was on offer to us. Both courses were faultless and served piping hot so that did impress me much! Nothing was hurried along nor nothing took too long, the timing of our sitting was just right and with a packed parlour. It was a ''hat's off!'' Jekyll & Hyde, Birmingham is waiting!  Feeling suitably satisfied by our meal we decided to enjoy a final drink before departing for home. Deserts are for fools, I don't use that term of phrase! I chose the 'Blueberry Thrill' and Kelly chose the 'Joseph Jekyll' both Gin cocktails were served in a beautifully decorated Hendricks bone china cup and saucers, one way to end our meal and drinks.

The Category Is Gin!