I muscled in on my cousins Christmas present to see Charlie and The Chocolate Factory: The Musical at the Theatre Royal on Drury Lane in London. I'm still a kid at heart, try convincing a five year old child that was no easy task! It wasn't just the show that I loved, it was great to be back in London for the day even thought it was probably one of the quickest days in London! 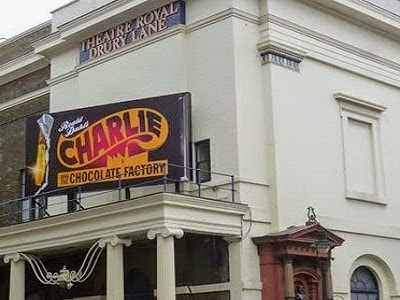 Bright and early on the 17th January 2014 our Virgin train hurtled down the West Coast Mainline towards London Euston for the matinée performance of Charlie and The Chocolate Factory: The Musical! Opening on the 25th of June 2013 at London's Theatre Royal, Drury Lane this new musical hit London's West End! From its humble beginnings as a simple storybook written by children's author Roald Dahl, this story about Charlie and that famous chocolate factory is now an all singing and dancing theatre show. Being transported to a place of 'pure imagination' was the plan! My second Christmas back in the United Kingdom saw me receive my very own golden 'theatre' ticket! I must say that the Theatre Royal along London's historic Drury Lane looked splendid from both the inside and out! It's true that I love London's West End theatre district! There's nothing that I wouldn't do to see a new show in the West End! No, I would or could never turn down the opportunity to see a show! Curtain up, please? Yay!


Never mind the child within me because it was time to take our seats, it was an interesting trip to the theatre from Euston Station as the London Underground loves to close lines for maintenance at the weekends, how considerate! Curtain up, the show began to find Charlie Bucket sitting within a rubbish dump relishing in his urchin-like existence, finding bits and bobs to make inventions. I somehow needed to forget the book and the original movie for this bit as I quickly realised that I wasn't going to see original Charlie, this would be a complete other extravaganza! Charlie couldn't even afford a bar of Wonka chocolate, for the market-seller threw numerous playful puns that children would be blissfully unaware of the meanings but the adults could have a chuckle for the audience predominately consisted of children and their parents. His Grandparents bed was extremely good, with interchanging parts the geriatric four brought a West End like dance routine from their beds! Oooh, I was being show a new version! 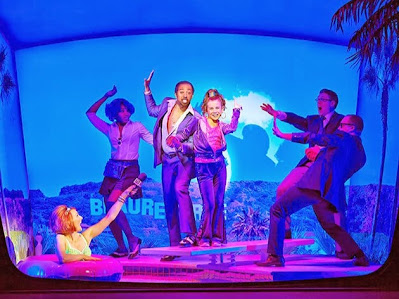 Four golden tickets had been won, firstly by Augustus Gloop, Veruca Salt, Violet Beauregarde and Mike TV! The presentation for each winner was fashioned into a mock television news special, crafted within a signature show tune and dance. Keeping inline with the new musical theme this segment showed a whole new Violet, something that I commend the writers and directors for executing! Charlie kept his optimism because even his birthday Wonka chocolate bar didn't provide a golden ticket to gain him access into the chocolate factory of Willy Wonka! Charlie Bucket thankfully found some money that been left behind by a seemingly wealthy and pretentious couple, had Charlie been given another chance? Charlie went on to experience his own television news interview, that segment proved different for Charlie didn't care about the song or dance. A certain level of integrity remained intact to stay true to the book. I wasn't mad because the show had bits of the original film and the updated version. Let's carry on!


Moments away from the interval stood the gates of Willy Wonka's factory, a mix of simple theatre set with computer graphics both made their way into this section of the show. Willy Wonka stood in-front of the five bewildered children who had all rightfully won their golden tickets, his entrance did resemble such steps taken by Gene Wilder from the original film. Played by Douglas Hodge, this Willy Wonka brought a simple level of eccentricity to the show that captured the real meaning of this story! Looking back over the first half of this sweet show the attention to detail for costume and set alike translated to the audience effortlessly, this new musical wasn't like anything I had ever seen before neither on the West End or on Broadway! I have been to a considerable amount of shows in my 23 years of life. I would have been elated if I was Charlie Bucket, winning a golden ticket to see one of the most secretive chocolate factories, well the closest for me was my visits to Cadbury World! To win actual Chocolate Factory! 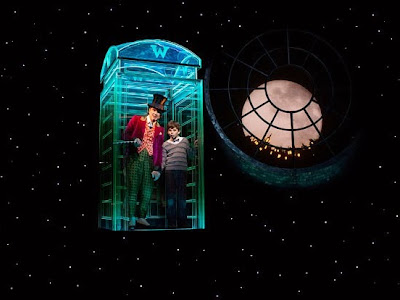 Charlie, Violet, Veruca, Augustus and Mike made their way around Willy Wonka's chocolate factory, accompanied by their unique looking relatives. The famous five took some time out of their exploration around the factory to find a room with edible grass, flowers and a lake made of pure milk chocolate. Augustus made a speedy exit through a suction pipe for his gluttony led him to be in an unfortunate place. Violet over-indulged in a three course gobstopper that went horribly wrong, as she ballooned into a blueberry to her father's delight! Patience? The special effects were plentiful, with sights that I haven't previously witnessed in the West End. Verucca learnt her lesson as she proved herself to be a bad nut, she had it coming! Charlie and Mike remained, the lucky two moved further into the depths of the factory, the Oompa Lumpas danced about almost like the films! About time! Mamma Mia in 2012 had been the last show I had seen in London! I have tried to be more cultured with the Hippodrome on my doorstep!

Charlie waited for his fate as he was the last child, greed or disobedience seemed to be the trigger to the other children's exits. Charlie remained the golden boy! Through the insanity of Willy Wonka, Charlie and Grandpa Joe almost walked away with nothing, but one stroke of genius brought back one of the most iconic song's from the original film! Willy Wonka invited Charlie into his glass elevator after realising Charlie was a born inventor, taking Charlie to new found heights the elevator glowed in the dark theatre amongst a scene of glittering stars! Charlie was welcomed into a 'World of Pure Imagination!' I was astounded and delighted for this song had been saved for the finale! Charlie inherited the factory, welcoming his family into a life that didn't mirror their situation at the beginning! This musical was like a blend of the book, original and remade films placed into a processor to become one magical and mesmerising musical finale! I want to see another show! Charlie finally had a reason to cheer up, cheer up Charlie!