Bath Spa, a small city located in Somerset, England happened to be the location of my latest adventure. I had read a blog about Bath a couple of months ago, which made me want to book a trip immediately but the idea disappeared for a while until just a couple of weeks ago when I decided on a whim to just book up and go! Can Bath be explored on a budget? Yes, Bath Spa! 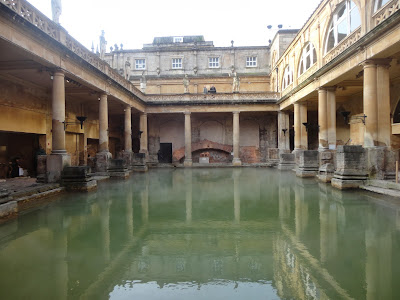 Arriving in Bath was a relief because the journey down was at an ungodly hour! Bath is beautiful, steeped in so much history, with period architecture that was good enough for the likes of Julius Cesar! This regal city welcomed me without any problems, I was ready to see what Bath had to show me, I was in for a treat for sure! I decided to keep on moving, being tired didn't stop me from finding the Roman Baths, a former health spa for the Roman elite during the Roman Era in England. Dating back to its earliest records around 60-70 AD the Roman Baths date back up to 300 years to this day! As the years past this hot spa acted as Bath's social stomping ground for all the elite that could afford to enjoy the opulent facilities, if I would have lived in Roman Bath I would have been a frequent visitor to the Baths. If truth be told I have been looking closer to home to find something opulent, I had struck gold! I loved Bath!


Students keep your student cards handy for the discount really makes the visit worth it! I tried my best to listen to the audio guide but I got a little impatient, I just wanted to see the Baths! Captured above is my view of the Roman Baths, I can wholeheartedly say that the Roman Baths fulfilled one of my expectations. Now declared by English Heritage as a grade 1 listed building, preservation and excavation has obviously been the key to showcase such a marvel of the past. It was amazing to see the detail of the Baths through the workmanship that was originally crafted to make such a grand structure. Julius Cesar's statue stood proud around the top of the Baths, he being the main reason for the Roman invasion and the construction of these Baths. I suppose in this instance the Roman invasion of Bath Spa amongst other places now acts as legacy for such sights like the Roman Baths?! Such a shame I was 300 years too late to have a swim. The view was everything! Yes, Emp Julius! 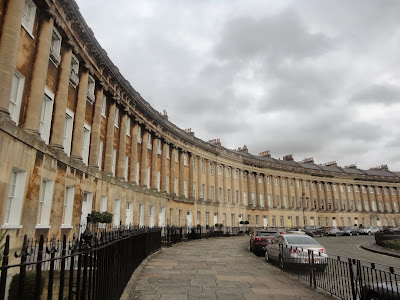 The future has been safeguarded for the Baths! Bath kept serving flawless architecture that dated back well into the 1700's and before. To the right is the Royal Crescent, a regal development of thirty terraced houses and flats dating back to the 1700's, which were constructed from 1767 to 1774. I was looking for something different to see outside the confides of the historic city centre, so a stroll away from the Roman Baths and the hoards of tourists led me to these regal houses, overlooking a lovely wide vista that gave a great view over the Royal Victoria Park and the rest of Bath. I don't say this much but I do love my country, well maybe sometimes! Hailed as another grade listed 1 property, this stately figure of Bath will be protected to continually be royal into the future. The Royal Crescent isn't just a housing complex, it also serves as a film set that gives the illusion from Georgian times. OK?

Keeping with the royal theme, the area surrounding the Royal Crescent and the Royal Victoria Park rewinds the clock back some more, its like walking into a period of time that hasn't changed nor influenced by our modern age. I loved Brock Street for it stood effortlessly with its Georgian charm, how had I woke up in Birmingham that morning to then be stood in such a regal setting?! This area was the reason I had chosen to visit Bath alongside the Roman Baths, I wasn't looking for high street brands at all, I wanted to see the Bath of yesterday! The shops along Margaret's Building were sublime, kitsch and very upmarket, completely out of my student price range so I just took a little walk past and imagined how much the items costed. Moving closer back to Bath city centre I stumbled upon The Circus, that happened to be a period looking cul-de-sac of townhouses that sat in a perfect circle. I had chosen wisely to visit Bath Spa! I love my foreign trips but England isn't boring! 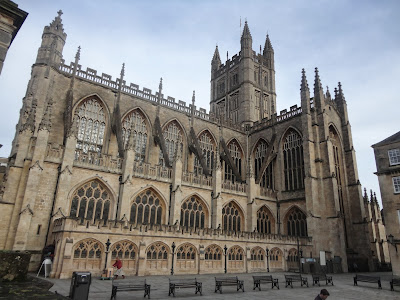 I shall be honest from the very beginning I'm not the religious type at all but when its all in the name of tourism I make allowances for places of worship. Making the most of my final morning in Bath I knew what I needed to do. I originally saw Bath Abbey on my first morning in Bath but decided against having a look inside until the next day for my early start and lack of sleep was catching up on me as my first day in Bath progressed. Captured to the left is Bath Abbey, I must say that I was very impressed by the architecture for Bath is a winner when it comes to appearance for the whole city is pretty as a picture! I found that the image captured of the Abbey looked the best from within the confides of the Roman Baths. I paid a visit to the Abbey to see the interior, marvelling at the great beauty and detail of the ceilings. Who knew that this Abbey dated back to the 7th century?! Like a prayer? Yes!

Throughout my short trip to Bath I experienced great things but there was one low point, let's just say my original hostel wasn't up to standard so I made my feelings clear and chose to stay at the Bath Backpackers Hostel. I would highly recommend staying at this hostel if you're in Bath for a short while as doing things on budget can sometimes be challenging! I loved Bath from the moment I stepped of the First Great Western train that transported me from Bristol Temple Meads Station. From the opulence of the Roman Baths to the attention to detail of Bath's Abbey, I have to say that I also loved the noble and stately Royal Crescent for it was royal! I would like to say that Bath chose me rather than me choosing it! I urge anyone to visit this enchanting Roman inspired city! I didn't make it to Stonehenge or Salisbury but have that pre-historic monument in my sights for sometime this year! I still had my day in Bristol so I moved onwards! Visit Bath, you will love it so!