Hello 2014! Leaving 2013 behind I embarked on my first trip of the year to Manchester. This trip was planned in November to aid my Dissertation as I'm investigating Manchester as a successful Gay tourism destination. Booking my train and hotel I waited for the first week of January 2014 to travel north to Manchester. Yes, Manchester knew that I would be shameless but mindful! 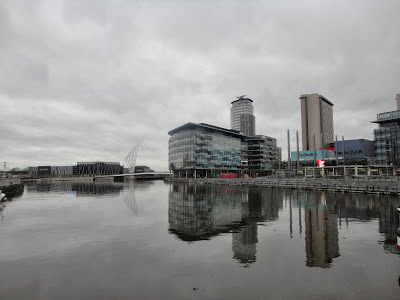 I didn't know where to begin, I consulted the Metrolink map and decided to see the Salford Quays and MediaCityUK to get my Manchester trip going. Taking the Manchester Metrolink is a piece of cake and it doesn't cost the earth to discover this Mancunian wonder! Departing from Manchester Piccadilly Station I took the Metrolink bound for the cobbles of Coronation Street. Passing through Deansgate was great I saw lots of Manchester and I had only just stepped off my train from Wolves. I would like to say that I'm the type that says 'No' to tourist maps at all costs because I like to make my own mistakes. I loved Manchester from the very first moment I stepped onto the Metrolink platform at Piccadilly Station for the staff answered my question with a smile and even engaged in conversation for a second, other cities need to take training from the Mancunians! I saw my Manchester trip as research! Go on MCR?


In hot pursuit of the Rovers Return pub I chose to get off at the Salford Quays to find MediaCityUK, but by surprise I saw the home of Manchester United Football Club, Old Trafford which stood before me so that was a nice addition to the day. You already know that I wasn't in Manchester to see the football! Reaching MediaCityUK didn't take too long because I could see the ITV and Coronation Street logo's standing before me across the quay, I wouldn't be permitted entry to the studios but it was good enough to see the studios anyway. I walked around the quay I saw the Lowry Theatre and other amenities before seeing the main MediaCityUK headquarters, the new home of the BBC. I noticed that everything looked so new, I guess this new out-of-town facility is the future of television production? One thing I loved about the BBC side was that The Voice logo could be seen so I can only surmise that Kylie Minogue will be appearing at MediaCityUK for the new series of that show? Yes! 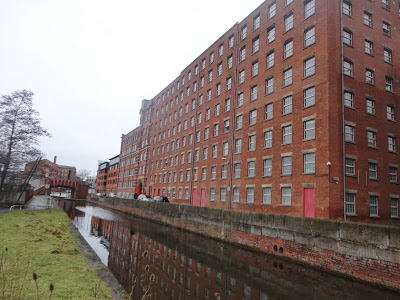 Manchester was dubbed 'the first city' of the Industrial Revolution, I wanted to see a former cotton mill in Manc! Choosing to visit Ancoats, a part of Manchester that's bouncing back from its Industrial past by the continued renovation of the various listed mills into high-end apartments. I looked past this new beginning to visualise what things would of been like for Manchester during its cotton making days. Established in 1798, New Old Mill was originally built as part of the McConnell and Kennedy Mills. Dating back to its 1912 beginnings the New Old Mill pushed Manchester forward to be one of the great cotton mills in the region. After one royal visit in 1942 by King George VI and Queen Elizabeth this mill was renamed to be called Royal Mill. Located beside the Rochdale Canal had its benefits for Manchester acted as a trailblazer for cotton production in England during the Industrial period. Trust and believe, MC!

Moving into today's modern era the area captured to above is part of the upcoming residential area known as New Islington, who really wants a new build house when you could live in a former cotton mill? I would not mind living in one of those new apartment for the skyline of modern Manchester looked to be quite progressive, let's keep going on with this Manchester malarkey! Manchester kept on showing me sights that I didn't expect to see, I know that reviving a previous project for my Dissertation subject was the correct decision to prompt a visit to Manchester. Being home makes travelling more challenging compared to when I'm in Birmingham but this trip was worth it! I'm glad my Dissertation took me to Manchester! Now, the weather had been damn awful after the Christmas period so I was expecting the worse for my Mancunian weekend, but I have to say that first half of my Manchester discovery stayed dry but overcast, enough about the weather! I was loving the city, M! 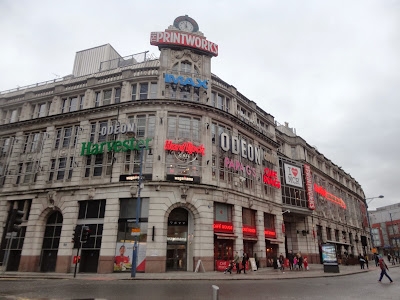 I chose The Printworks over the Arndale Centre. I had heard a lot of things about The Printworks from my friend Lucy, so I had high hopes for my visit to The Printworks. Once the Withy Grove Printing House, this former Printworks produced publications from its 1873 opening where such newspapers ranged from the Manchester Evening Chronicle to the Daily Mirror until its closure in 1985. I wasn't there to buy a newspaper, I actually watched new release Last Vegas, it was a really good film that complemented my day in Manchester and my time spent at The Printworks. Boasting several restaurants, a nightclub and a Virgin Active Health Club I guess The Printworks has a lot to offer to visitors and Mancunians alike. I really loved The Printworks, If I choose to visit Manchester again in the future I would definitely watch another film at The Printworks! True, I did things my way in Manchester, let's got back!

I would have to say that Manchester gave me such a warm feeling, well I mean the people were much nicer than in the West Midlands just in the simplest of ways. If I accidentally bumped into some one in the street, like I did as I was walking through Piccadilly Gardens on the way to The Printworks the Mancunian in-question even said sorry to me, now I hate to say this but that wouldn't have happened if I was walking down New Street in Birmingham. I have to say that Piccadilly Gardens looked great in the early evening sky, I had just finished watching Last Vegas at the Odeon at The Printworks and I have to say that I loved the golden lights that sat in the trees that I walked past, considering I don't care for Christmas lights I was quite impressed! Manchester, you're doing very well! Leave the cinema out, I went back to my Premier Inn to get ready for the night ahead! I had research to conduct! Manchester had showed me a great day so far but my night was going to be shameless! Yes! 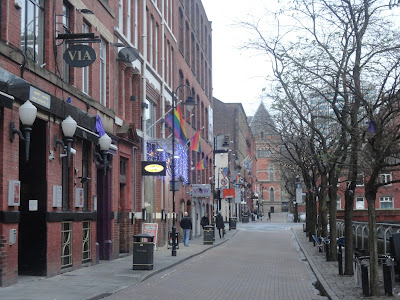 Canal Street, the heart of Manchester's Gay Village was the main motivator for my trip to Manchester. I had branded this excursion, my 'observational educational trip!' Even in the afternoon I was ready for the night! Captured to the right side is Canal Street, I decided to take all my photos of this part of town during the day as I decided against taking my camera out with me that night. I had seen the television programme Queer As Folk so I had visualised what the Village would have looked like! That show was filmed a few years ago so things change but I wasn't put off by what I saw. My main focus of my visit to Manchester happened to build a picture for my studies, my main theme being around Canal Street so it was only right I took a trip up to Manchester to experience what I'm studying. I've got my sights set on Birmingham Pride this summer so I can't answer when I'll be rocking back up to Manchester's Gay Village? Go!


Dressed to impress I made my way down to the Village to partake in some research, I chose Rembrandt's where I saw Belinda Scandal perform her cabaret show. It was nice not to have my phone with me so I didn't have a clue what the time was, as the clock struck 1 am in the morning I left Rembrandt's for AXM. AXM was slightly quieter than Rembrandt's but it was all an experience! I wasn't satisfied with my night until I had thrown some shapes on the dance-floor so I traded AXM for the New Union on Princess Street. I had a great time at the New Union for I enjoyed a few drinks and danced to my hearts content, I must say that I'm pleased I chose to party at the New Union for it was a down-to-earth venue that didn't take itself to seriously unlike some of the other super-clubs! I suppose it being the first weekend after New Year's made some places quiet, that wasn't a problem for me! Lunch next time at VIA Manchester sounds like a plan! You haven't seen the last of me! No, MC!

It's Got To Be Manchester!