I have been so busy recently, well from a university perspective so me and my friend Kelly decided to book some tickets for the football on a whim to The Villa for an afternoon at the football. Our premier league football match happened to be played between Aston Villa and Manchester United. I had hit the sauce hard the night before the match, I was unwell! Not well! 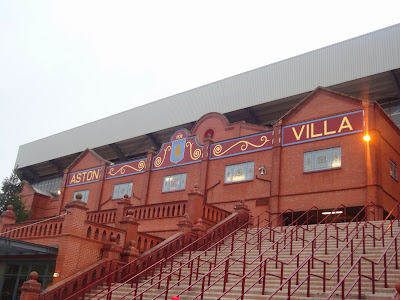 Before kick-off I got the chance to see the original facade of Aston Villa Football Club's Villa Park entrance, dating back from 1894 I was loving what I saw. I'm not one for sports, well I have never been really but I guess its a captivating event that grabs people's attention so I'm willing to give that notion a try. During my year in New Jersey and New York I made it my mission to view as many sporting events as possible, so I knew that one football match would put me in good stead. I had never been to a football match in Birmingham before that day. The weather wasn't so nice but me and my friend Kelly didn't pay any attention to the grey skies for the kick-off was waiting for us! I'm known for supporting Birmingham as a city and as a tourist destination, so I thought I would extend this passion to the football match in hand. Sport is still an ingenious way to attract people to a city! Visit Birmingham get it down! UCB got me riled!

I was looking forward to the beautiful game to begin, we had acquired our tickets for a rock bottom price compared to our fellow students from University College Birmingham, for the outing had been organised through the International Guild. I had passed Aston Villa's football ground on many occasions whilst on the train to and from Lichfield so I was quite excited to be formally acquainted, good things come to those who wait! I was very impressed with the red brick entrance to the home fans section as we would be in the Aston Villa home supporters section, when in Birmingham I fiercely support my student city no matter what capacity it may be. Aston was in my sights so I'm pleased I made it to the Villa, next time to Aston Hall though! I had over indulged in some mulled wine and cider the night before so my state of mind appeared to be quite fragile, let's just say that watching a football game was quite a good hangover cure. I showed my ticket to enter the stand without judgement. 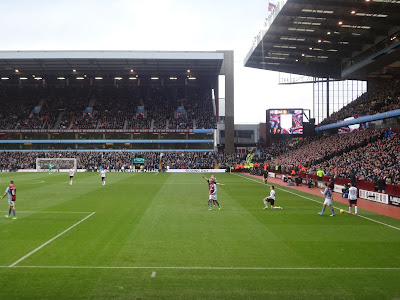 The pace and energy of the game gained momentum as each second past. I was the envy of my brother and my granddad for they would have done pretty much anything to get tickets to a Barclay's Premiership match like this one. Manchester United picked up an early lead by scoring their first goal during the 15th minute by Welbeck, securing a second goal in the 18th minute to a rapturous applause from the United fans but a defiant crescendo of dismay was displayed by us the Aston Villa fans. We kept things positive, jumping up and down at a seconds notice as each time the ball drew nearer to the home-side's goal area. I was getting into the spirit of things, cheering on the Villa, I felt myself get emotional about the game because Villa needed to score! Yellow card after yellow card were dished out by the referee, tensions were rising. So, Wayne Rooney played a fair game but made some off-side tackles. AV, I cannot!


Benteke made the crowd cheer, I could sense that the loyal supporters cared much more about the capability of the player rather than the status of the player, not mentioning various members of the Manchester United squad. It wasn't looking to good for Aston Villa but our commitment and applause didn't wane for we knew that good things would come Aston Villa's way. It became evident that Manchester United would take the lead, for in the 52nd minute United's Cleverley scored the third and final goal that decided the fate of the match. Villa tried their best but for me it wasn't about the winning, I'm not that into football. I would say that throughout all of the match the tempers never frayed in the Villa home side for we had this covered anyway, whereas a sea of police officers descended upon the front of the away fans section of the football ground, no trouble took place that boded well. I might book another ticket to see Aston Villa, the next season looks packed! 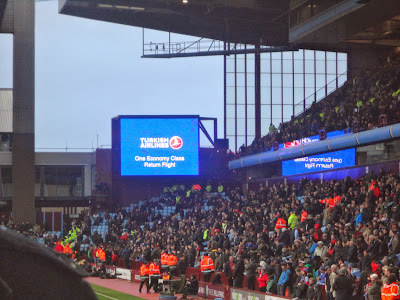 Moving away from the match I couldn't help to notice that Turkish Airlines happens to be Aston Villa's official airline partner. Captured to the right is an image that caught during the half-time competition where one of the three prizes appeared to be a free return flight from Birmingham Airport to any airport within their route network. I have had the opportunity to fly with Turkish Airlines on two occasions to Dalaman via Istanbul and more recently this July. Looking back at my TK experience I would definitely fly with Turkish Airlines again for they are a formidable airline. Keeping in line with Aston Villa I see the partnership to act as an integral part of the future development of Birmingham Airport and Birmingham as place to do business. I'll be looking for tickets for matches at Aston Villa in the new year. I'm not an avid football fan it's always great to show some love to my student city. Oh B, an airline!


It's easy to say that Aston Villa FC had a winning formula even though things didn't pan out so good for this match, I know their winning luck will return on Boxing Day for their next match against Crystal Palace. I'm super glad I managed to get tickets to see this match between Aston Villa and Manchester United for it was a great experience that took me back to my afternoon at the New York Red Bull's in Harrison, NJ. I won't be going back to the NYRB's but I will have that Montreal Impact gave available in my back catalogue from 2012. I'm hopeful that next year I shall return to Aston, Birmingham to experience the Gregorian manor house Aston Hall. I'll be leaving Birmingham for the Christmas break, it was a great day besides the epic hangover but somethings are just so. Football isn't my first thing but I like to challenge myself once in a while because life is all about taking chances. Let's just say that Aston Villa FC has been serving footie realness since 1894! Football? Yes, it was a one off!