Do you know a place that's 'Sweet Like Chocolate?' Me and my friend Kelly both made a sweet escape from Birmingham's bustling city centre to experience the city's confectionery wonder! Stressed out by our current university assignment workload, we wanted something to do! We decided to take a trip to Bournville's famous Cadbury World! Life is always sweet with Cadbury! 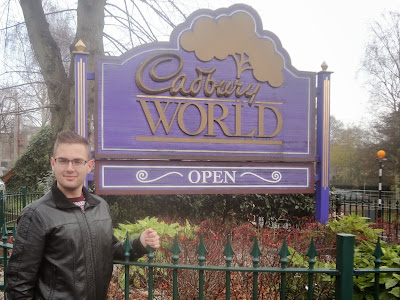 Arriving into Bournville felt like I was revisiting somewhere familiar as I had been to Cadbury World numerous times as a child. It had been a few years since my last visit, so I was very excited! This semester has been a trifle stressful but holidays are coming! The streets of Bournville were quiet but very cold as me and Kelly walked from the train station, we marvelled at the wide array of Cadbury built houses that dated back to the 1890's! I decided on a complete whim to book our tickets, with the help of Cadbury World's social media team I was assured that we could use our student cards to get student discount, save more money for chocolate I say! Getting to Bournville from Birmingham city centre is really simple for London Midland trains run every fifteen minutes from New Street station so we found it effortless. I wanted something different compared to the big smoke of Birmingham! The city gets crazy!

Above to the left is one of the 'welcome' signs to Cadbury World and its operational chocolate factory, for this chocolate-making empire acts as both a tourist attraction and a integral part of Birmingham's history as a key innovator from its Quaker beginnings to their recent partnership with Kraft Foods. Being from Bilston means that I've always been close to Cadbury World as I have had the chance to visit many times before my most recent experience. I wanted to see what Cadbury World had to offer for I'm a degree student in my final year so I would be able to see things from a different perspective compared to my previous visits. I won't lie to anyone because on that morning I was so excited to get on the move I woke up before my alarm that morning, Christmas arrived early! I wasn't prepared for the difference with the attraction but times do change. So, let's get to grips with the here and now, I wanted to eat a lot of chocolate! Kelly? Let's go and get some chocolate! Let's go! 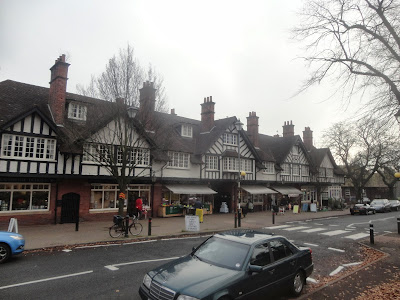 Located four miles away from Birmingham city centre is the town of Bournville, this is a town that truly has that 'chocolate box' look. It's just beautiful! The cold harsh December weather made Bournville's village centre look very Christmassy, we have both been busy with our assignments the festive season had not entered our minds all that much. We were looking to have a nice day out, the halls were getting boring! With some time on our hands we chose to grab a bite to eat at the Bournville Bread Basket, to the right, we found a wide selection of freshly prepared pasties, pies and sandwiches. We enjoyed our cakes and pasties outside for its acceptable to partake in alfresco dining in Bournville, aside from the cold weather we had a perfect view of Bournville's quaint village heart. Cadbury is a large part of Bournville so we made the effort to support one of the smaller Bournville businesses B!

Pardon me for my tardiness, I haven't explained the meaning of Bournville, the Cadbury brothers took inspiration from the Bournbrook river and the French word for 'town' that created the then village of Bournville. This village like town gave the workers of Cadbury a sanctuary, a place to raise their families away from the smog of Birmingham's growing industrial centre to enjoy the greener pastures of Birmingham's french fancy of a town. Bournville welcomed us with opened arms, so I know a return visit will be in-order soon! We felt like we had both been transported to another time for the feel of Bournville's Victorian architecture is like a breath of fresh air compared to the fast paced life of the city! To quote I was like a child in a sweet shop, Kelly was feeling the same way! I know that I might sound like a five year old child but I really don't give a hoot! If you visit Birmingham I recommend a visit to Cadbury World! We can never have too much of the sweet stuff! Kel, it's time! 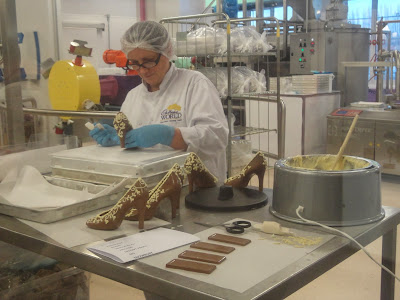 The time had come for us to experience the 'Chocolatey Fun' promised by Cadbury World, our journey through the life and times of all things Cadbury was mighty fun. No visit to Cadbury World would be incomplete by not learning where the 'sweet stuff' originated from, now I understand why I visited here for my school trips so many times! I personally enjoyed my supply of chocolate that was kindly handed out during our visit through the Cadbury visitor experience and factory. It was great to see new and existing parts of the exhibition for things have to grow and change, I saw lots of new things that amazed me! Our day out was becoming the perfect 'sweet escape' that we needed to forget about our tiresome final year studies! Who knew that George Cadbury opened his cocoa shop on Bull Street, in the heart of Birmingham's city centre? Remember that Birmingham is the best! Hershey, who? C, keep it British!

To the left is one of the Cadbury Chocolatiers who was crafting a range of beautiful looking bespoke chocolate high-heels, I was really impressed with the skill and quality of the product as they were displayed in a glass cabinet that sat a few metres away from the assembly line of chocolate Chocolatiers. I'm sure I saw these tasty heels in the factory shop at the end of the exhibition? It's a key thing to bare in mind that the Cadbury factory is fully operational so I had to re-frame from taking photographs in the packaging areas that were on display to us, its always best to respect rules! Anyway, I loved the factory tour even the brief ride on 'Cadabra' a great experience for young and old, which I do remember from my childhood visits. I tried to take some snaps throughout the ride but my camera fails me. It was like we had entered into 'a world of pure imagination' where we did view an interpretation of what could be called 'paradise', we were in a chocolate factory after all! 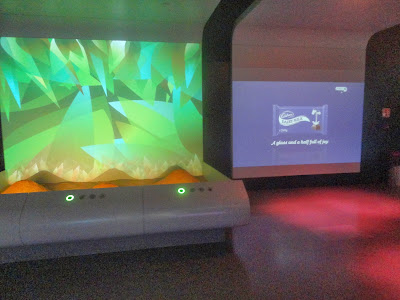 It's no secret that in recent years Cadbury's has changed the way that it advertises it's confectioneries and chocolate brands for its been mirrored within the final stage of the Cadbury World exhibition, no longer are we 'so excited' for Crunchie for there's a new series of adverts that have been seen on our television screens and on YouTube, one of the new adverts featured a Gorilla playing a drum kit, it was great! But it was also nice to see the older marvels of Cadbury's advertising efforts featured an exhibit that was themed around the popular soap opera that advertised Cadbury's Astro's, a chocolate treat that are no longer made, shame that is Cadbury! This new addition to the Cadbury World experience showed a modern, detailed and interactive glimpse of the future. From the Aztec beginnings to the Quaker way, ending with the projections of the future, Cadbury World's worth it! Kel, did you like Cadbury World?

Our day spent in Bournville at Cadbury World was ace! Thank you for allowing me and Kelly to use our university student card's that allowed us to enjoy our day at Cadbury World on a budget! I have every intention to continue eating Cadbury chocolate and being proud of my student city producing such great chocolate! From the chocolate high-heels to the quiet streets of Bournville, I'm glad that I chose to spend my day in this part of Birmingham with Kelly! I almost forgot to mention that by suggesting a friend to visit Cadbury World for the first time should warrant some extra chocolate for me? Sort it out CW! It was really nice to get out of the city centre and do something nice before breaking up for the Christmas holidays, need I say no more? I held back from buying any treats from the shop, its changed so much since visited when I was a boy. I write because I love it, so having a blog to publish about chocolate was great! Thank you Cadbury World for our 'sweet escape!' Yes!