It's no secret that Christmas changes for us as we grow up but I still want to have a memorable day each year. Being back in Bilston this year for the festivities has been really nice. I was feeling some kind of way, after experiencing 2012s Christmas in the USA. Being back home for the holiday was nice, it was easy falling back into the rhythm. For 2014, Where will I be where? 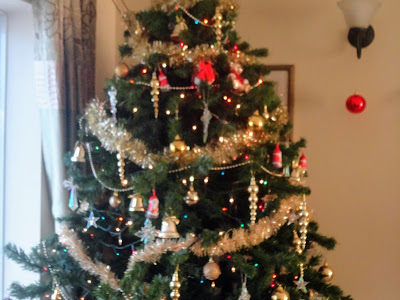 I have always been used to the same wonderful Christmas tree that's put up every year at my Grandparents house. During 2012 I spent the festive period living in Newark, New Jersey so things would be very different. Being home in 2013 felt so strange, if it had been the previous year I went to visit the iconic Christmas tree at the Rockefeller Center in New York City. Christmas Eve on both sides were very different! From NYC to Birmingham, the build up to the big day had me capturing those Christmas vibes from very different angles. Birmingham's Centenary Square did serve an ice rink but NYC Rockefeller Center did it better! OK, I was doing my best not compare both Christmas experiences but it was difficult. Leaving my student halls, I made it home for Christmas after seeing Aston Villa play against Manchester United with my friend, Kelly. Truth be told, that family decorated Christmas tree looked great! Home!

To get in the festive spirit I booked two tickets to the Pantomime in Birmingham, I booked these tickets as soon as they were released as it had been a good while since I didn't want to miss out! I chose this outing to be a present for my mum, I went to see Madonna in NYC last September without her so the Panto was our treat. Sure, the Panto has changed for sure, new songs and set featured in Brum's latest seasonal show. This years Panto was Snow White at the Birmingham Hippodrome theatre with an outstanding headlining cast. Gok Wan played 'The Man In The Mirror'. I was living to see Gok Wan, he had recently been out at one of my favourite bars with John Partridge in Southside! Stephanie Beacham dazzled as 'Queen Sadista' whilst actor John Partridge played the heroic 'Prince John'. It was the perfect way to spend our Christmas Eve in Birmingham, it's a testament Panto still makes me laugh! Americans don't do Pantomime nor do they understand what it is? Yes, I needed that 2013 show! 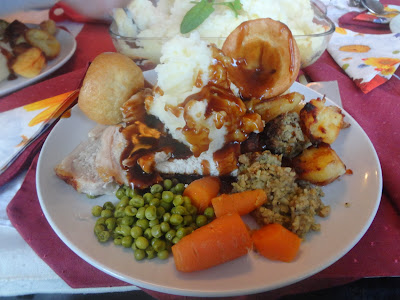 Food glorious food! Christmas Day is all about the food so I'm happy to say that my dinner was great! I consumed a healthy amount of Christmas spirits by dinnertime so I did the good thing by just eating my dinner. It was all about self-service this year, we all chose what we wanted to eat and that worked out just fine. My Grandparents had cooked up a storm of tasty Christmas delights, we had the choice between Pork and Turkey accompanied by a hearty selection of vegetables. I think we had Brussels Sprouts but judging by the photo captured to the left I had decided against that Christmas dinner choice. I look back to last year's Christmas dinner with fond memories as I was served some super tasty food but nothing compares to family, even though I was suitably inebriated but it was Christmas Day! I don't think I overindulged with my food during Christmas Day but I mad allowances in other areas! Sherry Trifle please!?


I didn't want a lot this Christmas, but I love each and every present that I received this year. Christmas changed for me this year, the gifts are lovely and the money that I received will set me for some great trips in 2014 but it was all about the whole experience this year. Like I said before Christmas changes, I was embracing it all. Captured to the right is my first attempt of a 'haul' I got a great Espirit travel bag and a bottle of Gordon's Gin, I love Gin! I have a dream to visit North Korea so my North Korea: Undercover book will make the perfect read. I recently saw the show 'Cabaret' in theatre so I look forward to watching this Berlin inspired musical. My blogging is getting to all parts of my life, its got to be that way! Bringing the music to the table I asked for Icona Pop's new album This Is ... but I received their EP titled 'Iconic EP' so that was nice! My simple Christmas wish list was fulfilled! From the airport duties in 2012, to unwrapping presents at home, it felt bizarre! Yes! 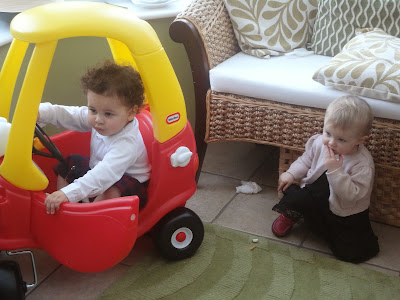 I would like to introduce my cousins Poppy and Micky who are both aged one. I missed their first Christmas for I was working in Newark, USA in 2012 but they were only small babies then so their grasp on Christmas wasn't as crazed and excited as it was this year. Christmas is all about spending time as a family so I would have to see that I loved it even if it proved to be extra crazy the children made the day for sure! Indigo who is the older brother of Poppy had a great day opening all of his presents and he knew what was going on more than anyone else there, that boy is clever! Me and Indigo shared a present, we will be seeing Charlie and The Chocolate Factory in London at the Theatre Royal on the 18th of January 2014 so I'm very excited, Indigo will be as well for children have their own special way of saying their looking forward to something. Poppy got her kitchen and Micky got his car! How are they only just one? Craziness!


This year's Christmas was unique and very different compared to last Christmas and other previous Christmases. From my pre-Christmas Panto at the Birmingham Hippodrome to my first Christmas drink I know that every moment was equally as good as each other. I loved all of my presents and spent some quality time with my cousins compared to the previous Christmas before my family had expanded. All the trimmings tasted great and I enjoyed maybe a little bit to much Gin but Christmas is for enjoying ourselves and if that means Boxing Day is plagued with a hangover then so be it! As for Christmas 2014 I'm hoping to spend it away in somewhere further afield than Bilston. I've just got over this Christmas so I'm nowhere near ready to think about next year's shenanigans! It makes me feel very grown up when I think about the countless years I would run downstairs on Christmas morning, that's the way the cookie crumbles! So, Christmas only falls once a year, the hangover lasted that long!

Tis The Season To Be Jolly!