Bonjour, bonjour, bonjour! Comment ça va? France is a country that's ripe for the picking and that's just the vineyards! I've been to France a few times, but its always to the country's Southwest to the Charente-Maritime region that's close to the city of Bordeaux. During my last visit I saw three places, getting to grips with the countryside, wine and culture in France. Oui! 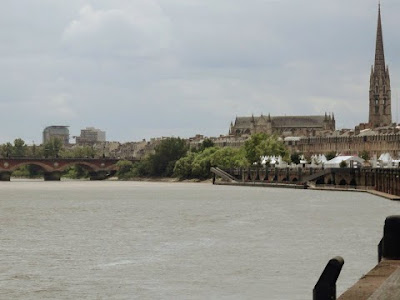 Getting to France was really quick and inexpensive from England, my flight from Birmingham to Bordeaux took only one hour and twenty minutes! Located on the banks of 'La Garonne' river that's distantly connected to Bordeaux's 'Dordogne' river. I spent the day in Bordeaux where I was amazed by vast amount of historic buildings such as the 'Place de la Bourse', a point of interest that I was hoping to see. I really liked what I saw in Bordeaux, it was lovely! Bordeaux served beauty, that French city surprised me with its different personalities. Having visited many cities in many different European countries, I found that 'Je ne sais pas' feeling as Bordeaux was just darling with its cutesy French sophistication! How I loved 'Rue Sainte-Catherine', after my visit I learned that it is the longest pedestrianised street in France! Everything in B'deaux seemed like perfect sense to me! Bordeaux était charmant! Oui!

For many Bordeaux stands as a gateway city, with its airport being modest but nothing to shout about, I was very happy to be seeing more than just the airport! Who would want that? I don't! I've not been to Paris but can only imagine that Bordeaux could be classed a little sister for I imagine Paris is just a huge version of this endearing French city. From the quaint side streets to the grand squares, I loved the 'Place de la Comédie' for this regal setting is a great place to people watch as the holidaying Parisians can be spotted a mile off! Like many other provincial French city's Bordeaux is speeding ahead with its developments of high-speed rail but I reached Bordeaux by a local SNCF train from Montendre to Bordeaux St. Jean Station, a station that has a whole personality of its own. Never say never but I saw all the best bits during my time in the city of the river 'Garonne'. My day in Bordeaux consisted of a lot of walking but that was fine. Croyez-moi, Bordeaux en valait la peine! 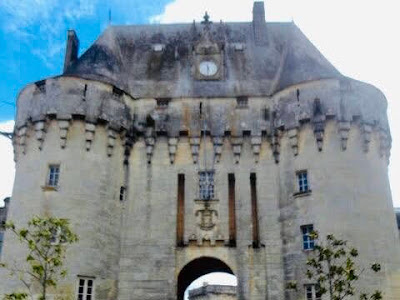 Stepping back into Jonzac during May 2013 had me feeling like I was 'Belle' from Disney's 'Beauty and the Beast'. Catching the quaint bakery and butchers cemented that I was well away from the buzz of Bordeaux's city centre. I first visited Jonzac during January 2011, would I see anything new? Keeping my eyes peeled, I definitely recognised the 'Hôtel de Ville'. The town hall had one fabulous former purpose as the 'Château de Jonzac', meaning in the 'Castle of Jonzac!' Half feeling like a Disney princess, the grandeur of Jonzac's town hall looked like a mini castle. Did I have any treats from the pâtisserie because my student finance loan wouldn't cover any small luxuries, I don't feel bitter about that because that small town bakery looked beautiful from the outside. In that moment I knew that my future visit to Paris would be filled with rich baked treats! Jonzac still looked fine, one burning question remained!

Walking away from the castle like town hall along 'Rue des Carmes', my paternal Grandfather informed me that the river below us was called the Seugne River. Having recently returned from North America, the architecture remained me of Montreal's old town. Made up of French Canadian charm, I was transported back to those Vieux Montreal moments in Jonzac, France. Their was a certain feeling that I felt during that day in Jonzac, I wouldn't be returning to France under the same circumstances! Let's just say that family doesn't always need to come first, I made the best of my location for that week. Even though Jonzac looked lovely, I knew in that moment that other parts of France deserved to be discovered. Marseille and Nice both look charming, I need to some time in the future to visit them! With all this sightseeing I was in need of some more liquid refreshment, I had a little town with a big Brandy secret on my radar! Jonzac, stay pretty because I need to visit new places! 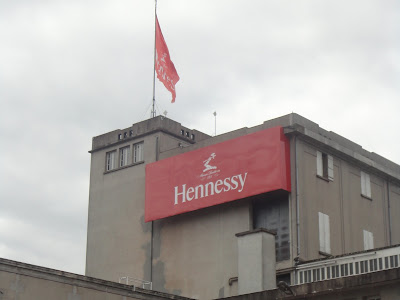 I never realised that one small French town held so many famous brands of Cognac! I made my way to the medieval town of Cognac to find the 'Maison du Hennessy' translated into English to the House of Hennessy. There might be many fashion houses in cities like Paris, New York and London but Cognac is home to Courvoisier, Remy Martin and Martell. Each brand of Cognac has their own 'Maison' of Brandy. I saw it was only right to try a small measure of the good stuff! It wasn't just the Cognac Brandy that brought me to that charming town, the many winding street corners that amazed me. Captured to the right the 'Maison du Hennessy' sits peacefully on the flowing 'Charente' river. I was certain that every town within that region had its own river? Forget Haute Couture it was all about Haute Brandy! I won't lie, if money wasn't at the centre of everything I would have had a few more glasses of Remy Martin Cognac!

The town of Cognac is part of the Poitou Charentes region within Southwest of France, it is part of the many towns that recreate a fairy tale nature. Cognac's small market square resembled a classy version of a British open air market, it looked a little bit more French. Back to the Brandy vibe, I found a lovely cafe that faced a regal looking hotel for at that time it was undergoing renovation work for the up-coming summer season. I ordered a small measure of Remy Martin Cognac, I won't lie it was a lovely drop! Let's just that certain factors during that day had me less than amused but I wasn't going to let that negativity get me down, I used every factor to my advantage! Savouring my Remy Martin serving, I don't regret anything about my reasons for wanting to visit Cognac! Set aside the river that I mentioned just now, I was at one with the nature of Cognac that May 2013 day in Cognac. Bordeaux and Cognac have been flashed back, I know there's one more place to remember! Oui! 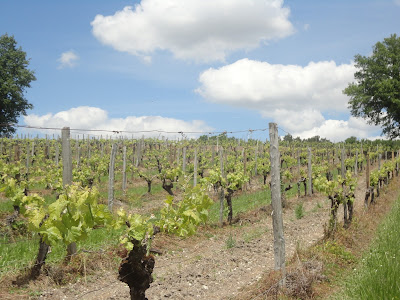 During my French holiday I spent most of my time in the hamlet of Chatenet, a serene and peaceful part of the Charente Maritime commune that's mostly made up of countryside and vineyards. Getting away from it all was great, now we're in November I would love some sun! Christmas is on the way so I can't complain! I spent one afternoon away from everything to walk down the country lanes that are relatively quiet, with the odd tractor or passing car for its only form of traffic. I loved the pure and organic feeling of the fields and the vineyards that make up most of this area. Holidaying in Chatenet has to be planned with meticulous precision for there is no public transport for miles and hotels are sparsely located in this region, choose a Gîte, which is a holiday cottage that are managed and some owners offer transfers from the nearby Bordeaux airport. Chatenet took those student stress away completely! Merci, FR!

Above is one of the many vineyards that produce one of France's most famous exports of Wine. Red and white Wine is produced from the grape in this region amongst other grape based beverages that are used within the local community. There's obviously Wine that is the most recognisable product, but there's 'Pineau des Charantes' which is fortified wine and Brandy that's famously known as Cognac, along with the nearby town that's been previously mentioned. Chatenet's best kept secret is 'Eau de Vie' meaning 'Water of Life' its the strongest grape based beverage which acts as a cooking spirit but can also be savoured as a liquor to drink with caution due to its 90% volume. I had a little taste, no word of a lie that 'Eau de Vie' was strong! I live in the centre of Birmingham's city centre so when I had my French holiday I loved the serenity that Chatenet offered me, a welcome change from the hubbub of city life. I'll be back, France hasn't seen the last of me! A bientôt France!