I never knew that Merseyrail's Wirral line terminated at Chester, making my way from Liverpool to Chester effortless because James Street station offered me a direct route from Liverpool's city centre! I was ready to be amazed by Chester and to see the unmarked border with Wales. For sure Chester 's city centre shared striking resemblance with Stratford-Upon-Avon! Yes-Chester! 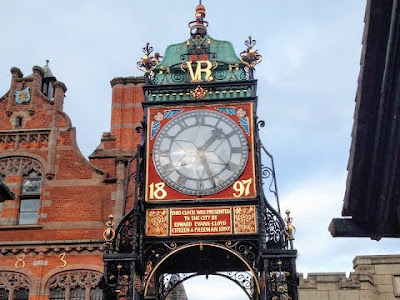 I reached Chester early on, after my short walk from the city's train station I was greeted by the Eastgate Clock Tower, I instantly loved it! Dating back to 1897 had I walked into a Medieval settlement, going back in time was the theme of the day! Yes, I had stepped back in time during my Liverpudlian experience but Chester took me further back into history, I was in a completely different age, more like the 1800's! Needless to say I had just left the bustling city of Liverpool behind me to find an equally lively Chester going about its business, the build up to Christmas was in full swing for sure! I had already been to other parts of Cheshire before but I had never heard of Chester until my latest Liverpudlian trip. Was I on time? I was bang on time but if truth be told, I didn't have the foggiest what significance the clock tower had bestowed upon Chester? Informing myself, the arch dated back to Georgian times!

Leaving Eastgate and its clock behind, I stumbled upon Westgate Street, where I saw quite a lot of quirky medieval sights! Westgate Street offers some of Chester's best shopping hot-spots, my whistle stop trip didn't allow for any purchases I did see many top brands such as The White Company and Barbour. Independent shops were plentiful with a wide range of price brackets carefully considered. Going hungry in this part of town would have been impossible for the wide range of cafes and restaurants broke away from the usual high street chains that shall not be named. Chester's city centre core looked so beautiful, I had only ever seen such a history before in William Shakespeare's hometown, Stratford-Upon-Avon. Yes, there was hearty serving of Shakespearean-like charm in Chester that effortlessly serves medieval-like realness! I'm not into shopping, leaving the stores to the streets folk I carried on with my Chester tracks. Yes, the speedy Merseyrail made that day possible! 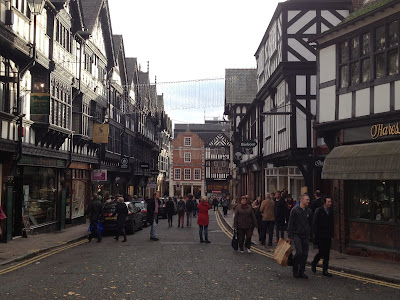 Chester had a vibe that took me back to my days as a Walt Disney World Cast Member, I saw some striking similarities that stood before me. As I stood on the corner of Chester's Abbey Square, I felt as if I was standing within EPCOT's UK Pavilion around the World Showcase in Orlando, Florida! The Rose and Crown themed part of Disney's World Showcase screamed back at me, the architecture looked just the same! Aside from the magical exteriors I loved the personality and class that Chester's side streets served, there was a rich and tasteful chocolate box feeling for sure! Chester's Medieval charm goes further than being a replica of Disney's Epcot, simply painting the perfect picture of this city's past. That November afternoon in Chester wasn't too cold, I was on hot pursuit of all the delights that this city had to offer me. I wasn't in any rush, Chester isn't a large city so I set own pace. I won't forget Chester in a hurry! No!

Armed with a sense of adventure I got an idea of what Chester possessed. I generally have high standards when it comes to capturing a photo but I had to rely on my iPhone to produce the perfect photo. I'm pleased to say that the atmosphere of Chester's Abbey Square vibe has hopefully been encapsulated within my photos because the streets were filled with eager shoppers and tourists, who were going about their business in quite a hurried fashion! I won't be bitter about my hectic photographic task because Chester was proving a charming and chocolate box like city, if its even possible to brand a city with that term? I wanted to see as much as possible within the short time I gave myself. Stopping for lunch didn't happen but Chester has an abundance of cutesy cafes that sit within the city walls. American's would fall over yourselves to find a city like Chester. A border now separates England and Wales within the proximity of the city, Chester was once a part of Powys? 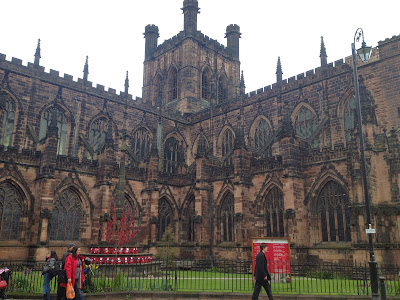 I make allowances for cathedrals because each place I visit they all have different quirks and stories to tell. Chester Cathedral stood opposite the quaint chocolate box shops overlooking Abbey Square so I was in my element snapping away with my mobile camera. I'm not a religious soul but I love visiting places of worship because they also have many stories to tell about the place they have stood in since its construction, yes bricks and mortar really have their own personalities! I did see street guides passing by the cathedral informing eager tourists about the delights of Chester's yesteryear's, I'm an independent traveler so I made my own way around the cathedral grounds. On another note, I love Christmas but when decorations and market get in the way of a place, that business really annoys. Chester's Christmas cheer didn't interfere with my photos, everything was quite subtly done. I appreciated that!

I wanted to see as much of Chester in that one afternoon before taking my train back to Birmingham, My train would be departing from Liverpool's Lime Street Station in only a matter of hours. I had already seen quite a lot of Chester, that race commenced right from the very moment my Merseyrail train service terminated at Chester's train station. I had a feeling that this city would show me something special. I found out pretty quickly that I wasn't going to need public transport during my time exploring in Chester. From the Eastgate clock tower to the chocolate box Victorian architecture I was very impressed at what sort of city Chester prevailed itself to be. The cathedral was nice and the streets that surrounded it were very pretty, leaving that cosy corner of Chester behind me, it was time to search for the Welsh border. I wanted to break the record, two cities and two countries in one day! To find the Welsh border, all that I needed to do was to find the River Dee! Sure, the UK! 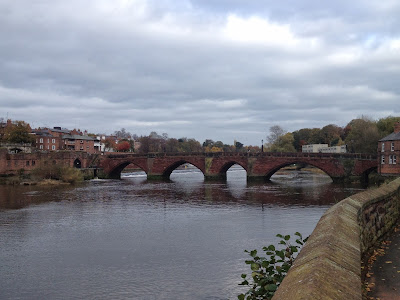 My final port of call was a stroll along the banks of the River Dee. Up until this point I had only looked at a map of Chester to see its close proximity to the red Welsh border, I wanted to walk over the border but ended having the footpath disappear before me, so I decided to turn around to admire the views of the Welsh border closer to the city walls. Technically, I could have already been in Wales because the buses were all heading for Wrexham (Wrescam) and Chester were spelt (Caer). Even though I crossed the wrong side of the river I experienced two countries in one afternoon! The River Dee had a chilled effect as it made its way through the city of Chester, if only the sun had made an appearance that would have been a fine thing! I must back up my previous statement that the weather wasn't a negative reflection towards Chester, merely a declaration of England's sublime November weather.

Walking back to Chester's city centre was a period discovery for I had simply walked outside of the Roman city walls, now that's what I call a history lesson! I wouldn't want to compare Chester with Liverpool for the two cities have very different histories and city-spaces, those differences made them both very individual places to visit. I missed the Mersey River but the River Dee gave me something calmer, I appreciated those two waterways all the same. Chester will always have a place in my heart, it's one Great British town that exudes nothing but the best Victorian, Medieval and Roman architecture in the same place!  Keep those city walls strong Chester stood as a great city to take a chance on, with the cathedral, city walls and chocolate box medieval style. Yes, another member of the United Kingdom lies across the River Dee, Wales only stood a heartbeat away from Chester's centre! If time permitted I would have extended my trip with some time spent in Wrexham.