Venturing back to the city of the Mersey River had to be done! Liverpool holds the connection to a distant family port arrival! I allowed the Port of Liverpool and the Albert Docks, I knew that Scouse city had many hidden treasures to show me second time around. Revealing Liverpool's Chinese secret and the RopeWalks had me ready to learn. Cilla, Liverpool's the boss! 是的! Yes! 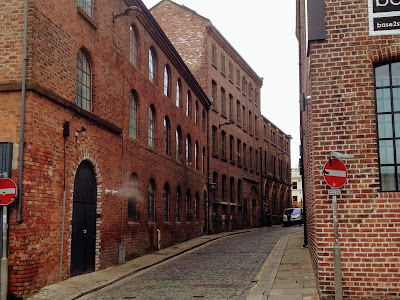 Liverpool had called me back for a second time, alluring me to recapture the true maritime city of England! Sorry, not sorry London! I had seen the Port of Liverpool and Albert Docks during my first visit, so I wanted to experience a part of the city that I never knew existed! Choosing the RopeWalks as the new discovery, I was transported back to pure maritime Liverpool that dated back to the days of Thomas Seel! I chose Duke Street for a slice of true Liverpool because this side of the city centre served standard Liverpudlian grit! I identified with the working-class vibe because that's my background, that corner of Liverpool satisfied my expectations for certain! Liverpool will always be a mint city, from Scottie Road to the Liver Birds it will always be one of my favourite English city's! I don't return to places unless they capture my heart, Liverpool had done that and so much more! L'Pool, I wanted much more!

Liverpool's RopeWalks served an abundance of restaurants, bars and shops that were right up my street! Choosing Bold Street for the best buy for the independent boutiques exuded kitsch and cool! Cutting to the chase, I was looking for more history from Liverpool's industrious past, I had to look closer! The RopeWalks got its name from the use of the narrow streets that were used to make the rope for the ships that docked in Liverpool's bustling port, serving ships that sailed to the four corners of the globe! I was impressed by the lanes where those tight ropes were walked! Rewinding the clock back some more to the 1800's, that's when Liverpool walked those ropes the house down! Yes, I mentioned those ropes twice! Liverpool wasn't about come for me, she had my back completely, showing me the sights I trusted that Northern city implicitly! London knew to take several seats during my day of learning that was spent in Liverpool, the empire wouldn't have anything without Liverpool! No! 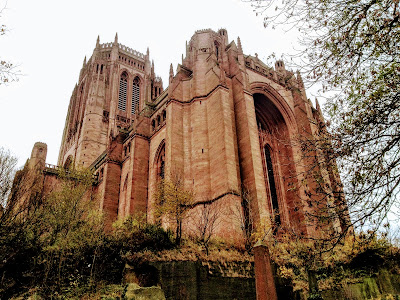 Liverpool has two iconic cathedrals but I chose the Anglican Cathedral around the Chinese Quarter. If I'm honest I would have to say that Liverpool's Anglican Cathedral gave me a sense of warmth with its deep crimson stone structure, even though I'm not a religious soul I loved this place of worship. I took a stroll down to the cemetery to get a different view of the cathedral to find a place that exuded a quiet and calm aura surrounding the gardens of remembrance. Now, come to think about it I haven't been to Birmingham's cathedral so I must put that on my list to do. But one thing that made sense was that I felt a connection to this grand cathedral for it sits on a slope, looking over the city of Liverpool protecting the city of the Liver Birds! I blog for the love of it, its very rare if I get paid for it so I hold its blog with a special place for the memories made. Of course Liverpool's a priceless city for me! Yes, LPL!


Keeping close to the Anglican Cathedral stands Liverpool's Chinatown, I learnt that the first vessel sailed form Shanghai to Liverpool in 1834, carrying silk and cotton wool. Unlike other Chinatown's Liverpool grew in popularity with the Chinese sailors who chose to settle in Liverpool, a demand for the comforts of home signified the beginning of Liverpool's Chinatown in 1866. Come to think of it Liverpool must have set the trend in the terms of multiculturalism because it wasn't just the Oriental folk that decided to call Liverpool home. I didn't dine at one of the restaurants in the Scouse Chinatown but I will next time! Liverpool's Chinese Quarter had an understated feel that I liked. Don't get me started because I've being looking for that Shanghai Lil! Liverpool has a vintage Chinatown if I never saw one before!? Liverpool will always have a lasting legacy to its booming port days, things haven't stopped because the ships keep on trading! 我的上海百合...? Shanghai lil, where were you? Liverpool One is a postcode that I remembered well, its really quite simple! I was not in the mood to shop, wanting to do some window shopping I saved my pennies! Upon my initial 2011 visit to Liverpool, I was pleasantly surprised to see such an abundance of gleaming developments considering the recession had beaten the country's spending capabilities. I didn't feel an immediate need to eat as mentioned before, saving myself for later on that day I returned to Liverpool One for a cheeky McDonalds. I already knew during that early afternoon phase that I wouldn't be drinking anything alcoholic that night! I had had enough of that dancing juice in Birmingham, I didn't want my Liverpool birthday weekend to have any mishaps. Liverpool One still impressed me much even though I didn't spend any money, being a student I really have to watch my pennies if I wanted to keep travelling!

I wondered what the area around Liverpool One looked like when my family stepped off from their boat from Eastern Europe? Nevertheless, I suppose regeneration is the key? Yes! I chose Days Inn  Liverpool, getting to Liverpool One from my hotel meant I could take advantage of this complex once the sun had set. For food! I chose Days Inn Liverpool because of its convenient location, which placed me close to the world famous waterfront and James Street station connecting to the rest of the city! I saw my independent trip to Liverpool as something that was meant to be, that's just life. Who needs people to get in the way of your plans? I won't apologise for not visiting the Docks, because I wanted to see a more of LPL! Friends, I won't make another allowance for those who attract drama to every situation. Liverpool knew that category had been firmly closed! Retracing my steps, I made my way closer to my next destination for the day, only the Merseyrail could help there! Southport! 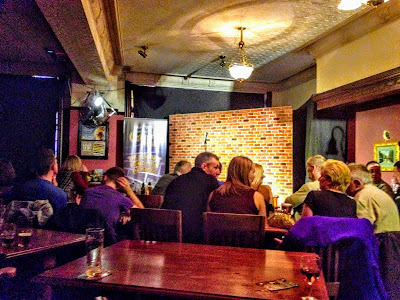 Liverpool wasn't the only place that I visited during my birthday trip, I took the Merseyrail up to Southport to catch up with my Disney pal Kat. Luck was right on my side because Kat had won two tickets to a comedy show in Liverpool's city centre! I grabbed something to eat from the chippy and jumped on the next train to Liverpool Lime Street. The comedy show was hosted by Hot Water Comedy Club, a comedy company I hadn't heard of before that evening! I loved the jokes told by the three comedians, it made a change to my usual going out routine. Is comedy your thing? I loved it! The comedians brought their banter and jokes to the audience, most of it was very tongue and check but hilarious in the same breath. I became familiar with Scouse words like 'Boss' and  'Lad' so I learnt some of the quirks from the Scouse accent. This comedy lark might have to become a regular thing!? Hot Water Comedy Club is Boss!

I don't revisit places but Liverpool was an exception, I'm glad I chose not to see the Port of Liverpool building or the Albert Docks because I knew that something else was waiting for me. I never knew I would be seeing a comedy show or learning about the date of the first Chinese settlers in Liverpool! I'm not one for spontaneity but Liverpool brought that hidden trait out of me for sure. Where's the Hot Water now?! I have to say that learning new things about Liverpool was great upon my second visit to this regal Liverpudlian city! So, whether maritime history is your thing or shopping till you drop suits you, I suggest you book that coach, train or plane to Liverpool! I loved the RopeWalks, Cathedral and the comedy served by Hot Water! The Cavern Club looks good to serve some Beatles realness?! You best get that Flyover sorted Liverpool! Other cities are cool but Liverpool serves up realness and shows the Wirral how to do things! Liverpool, this isn't goodbye! See you later!