Birmingham has been my base for the remainder of this year, I have seen this city change over the last eleven months! This year is flying past me, it doesn't seem like two seconds since I returned from America! I'm thrilled to say that Birmingham has never looked better, mind the current phase of construction because it's a 'new start' for 'New Street' and that's not everything! 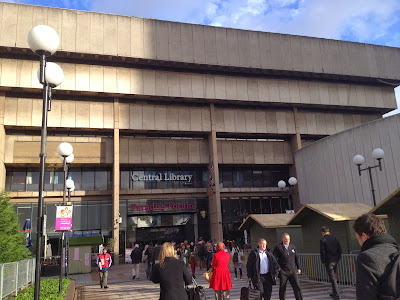 Taking my attention away from the redevelopment of New Street Station I have seen places within this great city centre that haven't changed too much, these parts of the city still look current as a part of modern Birmingham. I finished my afternoon's lectures at UCB's Summer Row campus and took to the streets of Birmingham's inner city centre to see places in Birmingham that stand out for all the right reasons. My first stop was Birmingham's Paradise Forum, formerly the home of Birmingham's once Central Library. Controversial as this may sound I think Birmingham's recently closed Central Library building looks very retro, a key piece of Birmingham's architectural stage of development as a major city in England. The concrete structure might look a tad dated or even some say 'an eyesore' but I see no problem with it, time may only tell what's going to happen to the original library! Birmingham, step up!


The bookshelves of the previous Birmingham Central Library are now sitting in the newly opened Library of Birmingham but the original Central Library acts as a key gateway to New Street and the Bullring, providing a whole host of dining options for the passing commuters, tourists and locals alike. Paradise Forum serves its purpose as a go-through with a difference, I must admit that with a bit of love this piece of modern history could well be a iconic talking point and place to be seen! This building has been a part of my University journey in Birmingham, I hope that even after my graduation and departure from this city there will still be something left of my kind of Birmingham. Being an ultra modern city is cool but Birmingham serves up lots of realness, I know that I would miss this iconic piece of 1970's Birmingham. But who knows what the future will bring for this Birmingham feature? Who honestly knows if this forum will be part of Birmingham's Big City Plan? Let's see, like now! 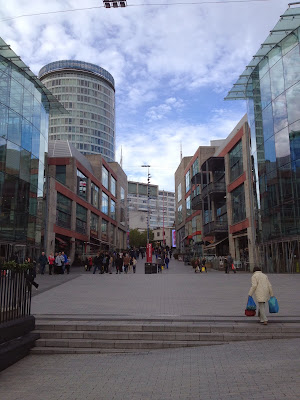 Let's skip a few years ahead from the opening of the original Bullring that was before my time! The Bullring has become the pinnacle of Birmingham's evolution as a prime shopping destination, showcasing the city's first Selfridges department store that's something quite extraordinary! Meeting in the middle this retail paradise brings it big for Birmingham, creating a shopping experience for each and every person that visits the epicentre of Birmingham's main focal point! The Rotunda stands to the left, promoting a modern and seamless impression over Birmingham's shopping magnets, this once tired office building now stands proud as a modern marvel due to Urban Splash's efforts now its a mix use of apartments. Are you 'Staying Cool?' Really? I'd love to stay cool one time before I leave Birmingham!


What in the world did Birmingham's original Bullring looked like? I'm a child of the new generation, I need to consult the internet. The Selfridges department is fierce with its space-age design and facade, which really puts the cat amongst the pigeons! I truly love that Birmingham has risen up over the years and as a student living in this great West Midlands city I really notice this city soar due to press attention due to the new developments that have been pioneered for this city! The Mailbox is a great addition to Birmingham's future fashion crusade for shopping world domination, I'm just spoiled for choice! Birmingham is awaiting its biggest reveal in the next year or so. Birmingham's now a fully fledged fashion phenomenon! Birmingham you're a Glamazon! You've got to sissy that walk Brum! 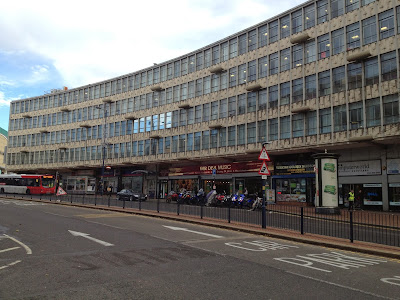 Birmingham's streets serve realness, you might think what on earth 'realness' stands for? But 'realness' is my definition for serving attitude and looking real without trying too hard! So, I know that Birmingham's Smallbrook Queensway serves true street realness! I remember my fresher year where most Monday nights turned into Tuesday mornings for me and my fresher friends would await our fast food orders as Smallbrook Queensway stayed awake right through the early hours. This part of town has a long parade of a building that houses a range of shops and amenities at street level but above seem to be used for office purposes. I love the 1950's inspired look of the buildings that make up Birmingham's Smallbrook Queensway because they're a piece of retro cool! Southside lies between the Queensway so my favourite part of the city lies within easy reach of my student digs. Let's love retro Brum! BHM, you're serious?

Upon my post-lecture walk around Birmingham I made sure I crossed tracks with this side of Birmingham as its a place that I usually see when I'm on my way to Birmingham's Gay Village, another place that holds close to my heart as its lively bars and tolerant vibe. I could really go on for days explaining all the places that I have become accustomed to in Birmingham. There are many places in Birmingham that possess qualities that resonate from the 70's right through to present day Birmingham, we shouldn't look down on these places that supposedly don't fit in with the changing face of this modern Birmingham! Wherever I go in the world after my studies finish in Birmingham I shall remain faithful by visiting from time to time, big things are on the way for this understated city! Love Birmingham's unique features, I believe that there is not another city in England or even Europe that serves up the same amount of retro cool, fierce fashion or street realness! Who's that London? Brum is ready! OK?

Birmingham, I Love You That Much!