Serving It Up... Birmingham's Balti Triangle!

I'm a fan of South Asian cuisine but I've never really been adventurous enough to breakaway from a mild Chicken Korma dish. Until now I ventured down to Sparkbrook, Birmingham to check out the Balti Triangle. Being a university student in Birmingham can usually mean sticking within the city limits only taking in the Bullring and the Canals. Bring that Balti back! 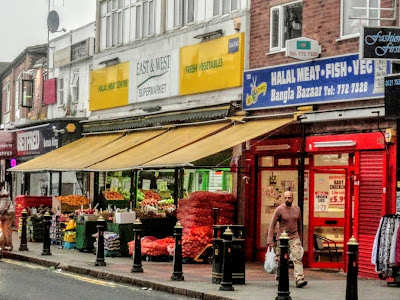 Welcome to Sparkbrook, the homeland of Birmingham's Balti Triangle. You don't need to be fancy, so get off that high horse and experience something authentic. Ladypool Road is the part that I discovered yesterday to find some spicy food and eastern promise. If truth be told I was following a Google map from my iPhone so I was relieved to see the sign for Ladypool Road. You could say that I'm quite daring because until yesterday I had not ventured past Highgate in all my time as a student in Birmingham. I really felt like I needed to take a chance and just go with it! I'm quite accustomed to areas like Sparkbrook as I lived close to Southall, London until I was six years old. Back to the Triangle, I loved the variety of convenience stores that were on offer as I turned onto Ladypool Road, it was great to see the long lines of fresh fruit and vegetables ripe for sale out front. So, I will now choose alternative Brum!


This Balti Triangle is a testament of Birmingham being a multicultural city with a rich tapestry of communities that complement each other. I believe we have to tolerant and willing to be part of these international factors because it's what Birmingham is famous for! I timed by walk from Birmingham's Westside to Ladypool Road, Sparkbrook finding out my journey had taken less than thirty minutes, proving this hot 'n' spicy area is conveniently located from Birmingham's inner city core. Now I urge you to trust something that you're not completely sure of because its so worth it. I shall never be told where to go, I plan to keep on seeing places that are away from the city centre because life's just too short and danger lies in the most unassuming places. I honestly don't know why I hadn't been to Sparkbrook for a walk around before that point? Sparkbrook reminded me of something from the 90's film 'East Is East' I mean that quite literal, why would I lie about that? B, I was living! 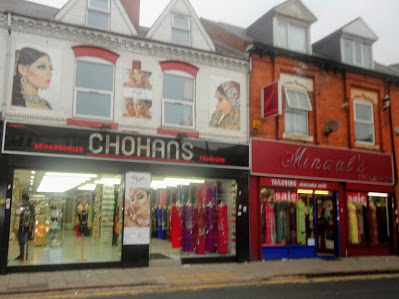 You've heard of 'Haute Couture?' Well, I want to turn that definition of fashion on its head because I saw some beautiful Asian saris and wedding dresses that could be certified 'Halal Couture!' Call me controversial but if I was a Pakistani or Indian bride to be I would jump at the chance of having a dress made at one of Sparkbrook's many bridal boutiques! I did not just see normal dress shops I saw Islamic fashion shops that specialised in the sale of headscarves like the Hijab and Niqab, the shops windows in those shops were very brightly coloured with a wide range of fashionable headwear available for the modern and more conservative Muslim women of Birmingham. I nearly forgot to mention something! Are diamonds really a girl's best friend? Birmingham's Balti Triangle features a series of eye catching jewellers, I prefer diamonds. Men are suited with select range of barbershops to congregate around. Good call for a cut B!

Still on the subject of religious and bridal wear there was a huge range of men's fashion wear for all important occasions, I would say that definition of 'Halal Couture' could utilised once again for the gentleman from this part of Birmingham. No one wants to look like a hot mess so these British Arab ladies work their 'Halal Couture' instead of wearing clothes from the western fashions houses that don't comply with the Islamic way. How have I gone from fruit and vegetables to Asian bridal wear, no matter what Sparkbrook has something that the city centre doesn't possess. Do Asian bride wear white on their wedding day? I feel like I'm going off on to a tangent but with all the colouful wedding fashion the bridal wear looked refreshing with a Eastern flare. A fair amount of modernisation was being carried out when I made it to Ladypool Road, I suppose the streets of the Balti Triangle are just been beautified? If I was an Asian bridegroom I would be back to Sparkbrook for my threads. Yes! 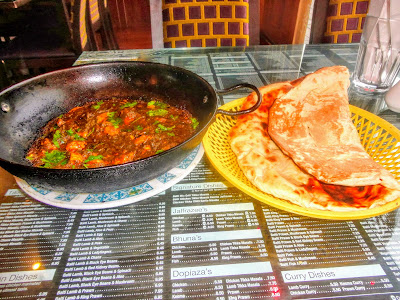 I did not just go to The Balti Triangle for a walk around, I went for the food! Choosing to eat at Shabab Balti Restaurant on Ladypool Road, Sparkbrook. Birmingham is undoubtedly the home and creator of the Balti dish, originating from the Pakistani and Kashmiri communities this dish has allowed the Curry to become the national dish of England. Back to my orders, I chose Onion Bhaji and Chicken Pakora to start with accompanied by a Poppadom with raita. I honestly didn't realise how much food I was going to be faced with so I had the rest of starters packaged for later. I took a breather from eating by enjoying a cup of Desi Masala Tea it tasted superb! Finally, I ordered the Balti Chicken Mushroom and Spinach with a Naan bread instead of Pilau rice. I literally enjoyed every single mouthful, even though I'm not one for extra spicy food I opted for medium spice that tasted just right. Don't be so beige!

I could not fault the service conducted at Shabab Balti Restaurant as it was exceptional. My whole order cost £14.00, which for an occasional treat didn't break my tight budget! Would I choose other places to eat upon my next visit to Sparkbrook? I don't think I would even though variety is the spice of life, I did really enjoy the food served to me. Also I shall rethink my curry of choice for next because I wish to sample other types of Balti dishes. Challenge yourself because as trivial as it sounds I don'r stray away from a Chicken Korma so I did good! Let's keep things simple, the waiters might only have limited English but my waiter was polite and nothing was too much trouble for Shabab to execute. Choose Shabab Balti Restaurant for an uncomplicated and flavoursome dining experience in the heart of Birmingham's Balti Triangle. To finish things off I even got a 10% discount card for my next order at Shabab Balti Restaurant, so I know where to eat next time. Consider that done! Deal!

Balti Triangle, Birmingham .... Thank You For Welcoming Me!