Are you craving for the warmer climate of Europe's Mediterranean? I suggest Spain, but not the usual haunts that attract the Brits abroad! I had the chance to visit the region of Catalonia, which is home to the outstanding city of Barcelona. Choose to fly from Birmingham Airport, where Monarch Airlines flies to BCN's El Prat Airport! No seas estúpido! Adiós ahora Inglaterra! 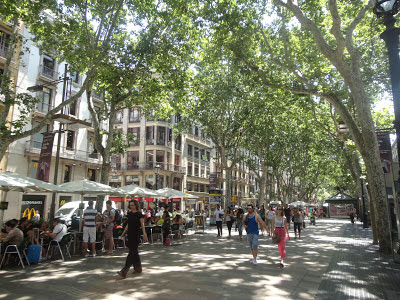 Barcelona has to be the perfect city to experience a slice of Spanish sophistication! I traveled to Spain's cultural capital during the first week of July 2013,  I'm still feeling quite in love with this city now in October 2013. To the left is 'La Rambla' where the best alfresco dining options are ripe for the picking. Finding my bearings in this part of town was really easy as most of the main streets crisscross with 'La Rambla' so getting lost is pretty much out of the question. I took the metro to see the city of a thousand streets because time wasn't on my side! I wanted to be the transport savvy traveller, Barcelona helped me with that part! Barcelona has many tales that pickpockets are on the lookout, but during my time I didn't come across any harm and felt safe at all times! I'm intrigued by other parts of Spain but Barcelona proved to be the city for me to experience my Spanish inquisition during the summer of 2013. Te Amo B!

I escaped the dreariness of Mother England to experience 'Plaça de Catalunya' where I was part of the action in and amongst the vibe of Barcelona's heart. I kept my ears open because Spanish wasn't the main language spoken within that region of Spain for Catalan is widely spoken, its more like a dialect but the locals couldn't hear my thoughts! Keeping with the foodie theme I took a stroll along 'La Rambla' where I found a wondrous market known as the 'Mercat de Sant Josep la Boqueria'. This market welcomed me with a whole host of pungent and alluring aromas, I got lost within the many aisles of that endearing market where even the fish section looked very appetising! I still have visions about that market for their was an abundance of colour, vibrancy and a sense of community within the urban sprawl that is Barcelona! Barcelona choose me for a reason! Need I say anything more about Barcelona being the perfect Summer getaway for 2014? Donde esta mi Barcelona?! Vamos B! 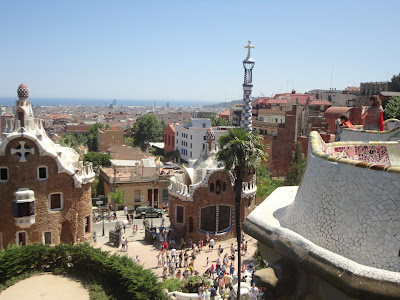 Need I be so careless not to mention another reason why I visited Barcelona! For the great Antoni Gaudi, architect and genius has left a rich treasure chest of places to admire in Barcelona. Captured to the right is 'Parc Guell' a stunning work of art that stands over Barcelona's unique city skyline, its a picture postcard view for sure! Sure, I had heard of the 'Sagrada Familia!' I knew my visit to that Gaudi themed point of interest needed some consideration, it was special! Back to the park, I could have stood there all day without a care in the world. Te Amo 'Parc Guell!' It was the first time I felt like I was in my own postcard! Barcelona served me chicness in one breath with a wave of historical charm in the next with its timeless architecture! It was easy for me to get lost in the side streets that eventually lead back to 'La Rambla'. The works of Gaudi suited me just fine, but still no Brits abroad! Don't ever! That's for Beni!

A house made of bones? I knew that sounded like a peculiar term of phrase but artistically the 'Casa Batllo' was believed to be crafted out of bones? This former stately home was once the residences to one of Barcelona's richest families that preserved this architectural wonder, helping it become the museum it stands to serve as today. I don't usually entertain museums but I was astounded by the beauty that this building inhibits! I got down to the 'Passeig de Garcia' to experience the house that never had a construction plan but turned out to be spectacular! The icing on the cake has to be the 'Sagrada Familia' meaning 'Sacred Family' in English this cathedral towers over Barcelona with its Gothic designs, setting the tone for Barcelona's unique flare of architectural icons. This magnificent place of worship has been a work in progress since 1882 its projected to be completed in 2026! Yes, I go to the 'Sagrada Familia' early to beat the queues! Huesos y articulaciones? Si! La casa dels ossos! 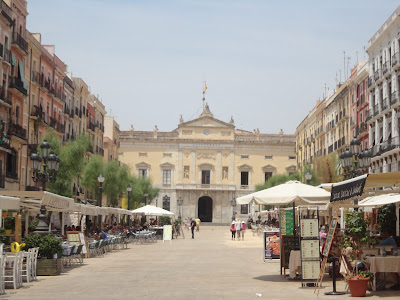 After I had spent two days in Barcelona, I simply had to see more of this heavenly region! Taking the Renfe Media Distancia train from Barcelona Sants Station to Tarragona. I spent the afternoon walking around this historical and culturally rich town, I was amazed by the understated beauty as it touched my heart with its beauty! Captured to the left was 'La Plaça del Font' the courtyard that took me back to Old San Juan, PR! From that point of view I guess Tarragona could have been a blueprint for San Juan, Puerto Rico? This small oasis of calm was made up of many rustic eateries and is the home of the 'Ajuntament de Tarragona' council headquarters. The train had me confused but it was fine, I took my train from the seaside town of Sitges and got a little mixed up with the lines but everything runs on the same line. It was a place that set the tone for my day's worth of premium sightseeing! Tarragona sure stole my heart!

I stepped back to Roman times by taking some time out to see the 'Tarragona Amphitheatre' as it had great views overlooking the Mediterranean Sea! Tarragona served a quaint beach but I left the sun worshiping for another time. Taking a stroll down 'Rambla Nova de Tarragona' to be at the centre of the action for showed me where the locals did their shopping and its the perfect way to be at one with 'Balcon de Mediterraneo' translating to the 'Balcony of the Mediterranean'. Tarragona wasn't the grandest of places but it had a special small town feeling that take the stress away from Barcelona even though things don't get to stressful their either. I admire places that ooze character and Tarragona did just that so all is well. Lunch time in Tarragona is a special time for a bite to eat at one of the the side-street restaurants that have the best lunch deals make chowing down on some local food doesn't have to cost the earth. Using the most basic of Spanish goes a long way! Dios mio T! 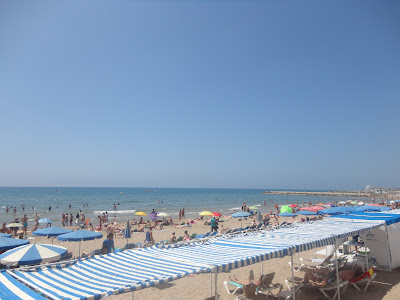 I bowed down to Sitges, the queen of the seaside! That fabulous beach town was definitely somewhere over the rainbow for that Catalonian premier Gay beach town. I took some time to rest and really get to know Sitges, its had everything I needed to enjoy the days lazing on the beach amongst the 'beautiful people!' Rainbows were the code in Sitges for all things fabulous, everybody stood welcome in Sitges! During the day I saw it as a must to see 'St. Bartomeu Church' to catch the best vistas. I enjoyed one of the delicious restaurants through many kitsch side streets. Better still there's always time to be a 'Material Girl' in Sitges as their's a never ending collection of boutiques that sell the best of everything fashionable! Sitges didn't specialise in large hotels because its a modest beach town. I stayed in a hostel that wasn't far away from the beach in a quiet residential street. That sexy Spanish town was on fire!

As the sun set on Sitges the party truly started! I found 'Carrer Bonaire' for some the best nightlife in town, where I found 'Queenz Bar' and 'Prestige Strip Club'. I will endorse 'Queenz Bar' for the music was fabulous and the local drinks taste strong, it was the right place to be! It was carnival night, I was ready to do some crazy things with squirty cream! Things didn't liven up until later on so it gave me the chance to have a few pre-drinks before getting down on the town. I kept my eating options simple. I won't lie I had an amazing time in Sitges, so I wouldn't rule out a return visit in the future! Sitges allowed me to be unapologetically and have a great time in the sun! How did I reach Sitges? I took the 'Rodalies de Catalunya' train from Barcelona Sants Station to Sitges, the journey only took around thirty minutes and ticket prices were very reasonable! I chose Sitges to conclude my alternative Spanish trip that didn't to cost me the earth. I have tempted myself to return to Spain soon!