Life in Birmingham has meant a lot of studying for me recently, for that reason I wanted to be productive and get some work done before allowing myself to a free afternoon. I took advantage of the weather because it has been pretty dismal recently, it has made it difficult to do anything especially when I'm so stressed with university at the moment. The canals helped me out much! 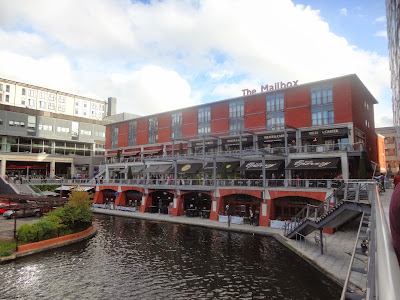 Rumour has it that Birmingham has more canals than Venice! Would you believe that crazy fact? I said goodbye to the Maltings due  to finishing all my coursework for the day to set off in-pursuit of some culture. Birmingham is a great city in my eyes, its modern, yet full of history and with its compact layout I can get around the main parts without any problems. Back to the canals, captured to the left is the Mailbox complex that sits overlooking the central canal basin in Birmingham's Westside. With some nice weather finally making a rare but ever so short appearance I snapped away like a paparazzo it was just nice to be out and about rather than going back and forth to university. Right now I miss my fresher year of mayhem! Currently my halls of residence is only a stones throw away from the waters that overlook the Mailbox and Cube. Of course, Birmingham has got me feeling real lucky! Brum, those canals!

I reckon the key to the Mailbox's pulling power is the Harvey Nichols department store? Now that does the trick! Even though my student loan is dwindling I still want to eat at Rodizo Rico, a Brazilian Barbecue restaurant that has recently opened in the Cube that sits next to the Mailbox. I will make it my mission to get some tasty Brazilian food back in my life because Newark's Ironbound seems like a distant memory right now! Talking of progress I suppose time is a healer? I know that I actually paid more attention to the Cube today, noticing that more restaurants are being constructed to make their home amongst the Gym and Spa, Hotel Indigo and the Marco Pierre White Steakhouse. I look forward to these new places opening as the Cube has definitely had a bumpy ride. Time is passing by within the respect of my university degree course in Birmingham so I'm taking every second seriously, I really don't want to miss a beat! Brummie, just take a deep breath because it's all going to be fine! 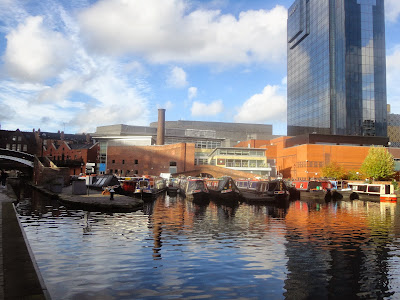 So back to that Venice theory, I saw on ITV Central News that this West Midland city was compared to the luxurious Venetian city due to having more stretches of canals than the Italian counterpart. I have not yet been to Venice but have seen it on numerous travel television shows but Birmingham stays close to me because its my university city! It was lovely to make the most of the bright blue skies to walk towards Broad Street. The burst of sunshine was a hit with the locals and tourists alike as I heard many a folk talking in different languages, we're very cosmopolitan here in Birmingham! Those canal boats are really charming, they were just sitting in the water that overlooked the Hyatt Regency hotel now if that's not a world class city standing in front of me then I don't know what Birmingham stands to be? We serve nothing but urban realness here in Birmingham! There's no other place I would rather be! Canals for days!

Canals came to Birmingham during the Industrial Revolution, acting as the urban waterways that connected the world to our fabulous West Midlands region. It's clear to see that investment has beautified out urban waterways to allow them to shine, creating sophisticated spaces for the city folk to wine and dine. We don't need that Venetian show for in Birmingham we only serve the realest state of mind! Reminiscing back to my fresher days makes me think that my year away in America shaped my blogging ways, I didn't think to have days out within Birmingham because it was all about hitting Broad Street till the small hours of the morning. I probably sound like a broken record but as my studies have been turned up several notches I have learnt to seek the realness out in Birmingham when the need finds me. Enough of that chat I need to hit the books and cut the booze, no chance! Venice, Italy can keep its classy city! Birmingham has more canals than you! Truth, B!

After powering beyond the canals and Broad street I made my way through Centenary Square to be greeted by Birmingham's Town Hall. Even though the Town Hall is a sight I have seen many times during the last three years, it felt I had seen things through new eyes! That cherished moment made me feel thankful for Birmingham, its been sobering now because I haven't long started my final year. Dodging the Great British weather is a skill to use whenever the time is right, I made it for the nearest point of interest! I was stood amongst the growing crowds that were powering their way past me, I needed to find someplace to shelter from the rain! The workload from the start of my final year at UCB had to be tackled that morning, I gave myself a limit of time before seeing fit to having a break! I know that with the city on my doorstep I will use it as my push to complete my lengthy assignments. Everything looked Roman!

The corner of Birmingham that I was in lay a stone's throw from Birmingham's main council buildings, there's occasionally people protesting about something! Freedom of speech, Birmingham keeps it 100! Yes, those protesting people were dressed as animals, they must have been protesting as part of an animal cruelty charity but their costumes didn't match up to the standard of Mickey Mouse and his friends. I haven't been to the Council House because its for official events, I'm going to need to blog like I've never blogged before in order to secure a gig that might well have a function there! During the months of November and December the area around Victoria Square and the Town Hall is alight with the Frankfurt Christmas Market, an event that I shall be attending this year for sure! Yes, the market gets mad hectic, the passerby and protesters made it look quiet. Sure, its no jar of honey when she gets busy in Birmingham! I was off to see the Birmingham Museum and Art Gallery! 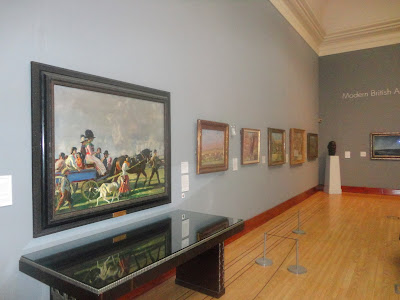 I loved the Birmingham Museum and Art Gallery! In all my student years here in Birmingham I had never thought to have paid a visit here, it was free admission so for a poor student it was a winning choice! Captured to the right is the 'Modern British Art' section, which I really loved the simplicity of this exhibit it was just nice. I'm not one to focus my attention on something for a long time so I made my way around the art gallery pretty quickly but made sure I took in the beautiful and thought-provoking art work and exhibits that were on display. I encountered exhibits of Ancient Greek artefact that have certainly stood against the test of time. For the next exhibit would definitely impress me much! I walked down the stairs from the worldwide art section to a whole section dedicated to the history of Birmingham, now I was loving what I was seeing! Give a shout out to Birmingham Museum and Art Gallery! Get it!

From the Medieval stands that informed me about Birmingham's beginnings as an average market town to a thriving industrial powerhouse I was astounded! The World War II section topped off my whole visit to a new high, there was a display about Women's fashion throughout World War II in Birmingham that depicted a rather extraordinary dress made out of different types of material, it looked very hip! Free admission is how I roll, appreciate the visual offerings that Birmingham Museum and Art Gallery serves to all of us who decide to visit. People underestimate Birmingham as an artsy city but when you take a closer look it's easy to see that this city has class. It's true to say that Birmingham showed me something new and something free that I can look back on and say that I loved! Don't be a fool, just take some time out of your seemingly busy schedule to appreciate Birmingham for what she truly is! Remember Birmingham has more canals than Venice, Italy! Figure that one out!

Hold that Gelato! I'll have a Chicken Balti!