The Next Stop... Kayaköy, Turkey!

Kayaköy is a forgotten village that can be found four miles away from Fethiye. I loved this place for its peaceful atmosphere, there was no doubt about that! Climb every mountain or take a stroll through the modern day village, truth be told a 'ghostly' aurora was certainly felt. Kayaköy sure schooled me good, today ruins remain in certain areas but village life carries on. Güzel, K! 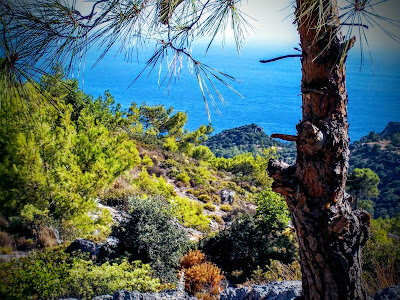 Hailed as the 'ghost village' this eerily quiet place had a lot to tell me. Once occupied by a large population of Greek Catholics until approximately 1925. The Greek people were ordered to leave Turkey. The last two times that I visited I have walked up to the top of the hill, through the abandoned houses. In 2013, I chose to walk through the village closer to my hotel. I would urge anyone that visits Kayaköy to trek up to the top for there's an abandoned church like building that looks over the mountains with idyllic oceans views. I would like to say that being on holiday should really be a relaxing time but I've been quite busy seeing new places and catching up with friends, I needed to make time for myself. Kayaköy is a protected village so it's not seen much development over the years, there's so much history. It was lovely to kick back, but only partially because this village looks too good not to miss T!

Staying at Muzzy's Place overnight, I've stayed there three times including that most recent visit. At night the temperature drops significantly, maybe those ghosts want to come out to play? It's always nice to escape from the tourist traps in favour for the peace and tranquility of Kayaköy. We took the Dolmuş from Fethiye heading towards Kayaköy and Hisarönü. Being away from Turkey for two years enabled me to see some amazing places but I feel equally blessed to have had the chance to revisit this Turkish gem. From the contrast of the busy city streets of Istanbul to the sleepy hills of Kayaköy I have seen a lot of the same but all its all been a crazy and beautiful adventure. Kayaköy has the benefit of being in a bowl affect its cocooned by the hills and mountains so the sun is tolerable. With this blog getting established in its second year, I wanted to capture my time in Turkey during the summer of 2013. My visit to Kayaköy proved to be a blogging dream! Let's get on with it! 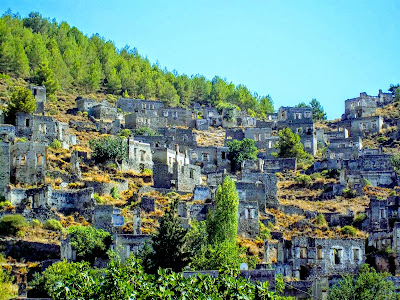 Kaya Village is now a UNESCO registered site as a 'World Friendship and Peace Village'. Amongst the ruins there is an abandoned Greek Orthodox church, which can be visited for a small charge due to been a protected site. I went to this church the first time that I visited Kayaköy and was amazed by the detail that was still left inside the church. Walking through the hilly village brought me many surprises but also planted several seeds of thought. How would I feel about being ordered to leave my home and the country that I was living in? I wouldn't have been too impressed either! Nevertheless, a walk up the hill brought the best views in the village to me from where I was standing. To the left is the hilly area where the abandoned houses can be found, going near them really felt eery. The experience was well worth it, it was a sobering feeling due to the history. No, nobody should be removed from their land! Not at all!

Kayaköy has many identities, it's known by a Turkish name, being the natural language of the country. Levissi stands as the Greek name for Kayaköy, that name was used during the Greek occupation but was changed to Kayaköy after the transition period ended. I must admit that the heat of the day felt cooler in Kayaköy, that place possessed a vibe that really chilled me out! I mean complete relaxation! How could I not pay attention to a place with such a colourful past? After all I all love a bit of drama! Turkey has so many hidden gems, across this vast country that make Kayaköy more loveable! We have to give thanks for the laws and legislation that protect Kayaköy from being altered or changed in any way. A government move I believe to be more than worthwhile! The world has seen many conflicts and evictions of races but the abandoned houses that still occupy the hillsides still look stand as a reminder, I admit what happened wasn't cool but we can't change anything now. 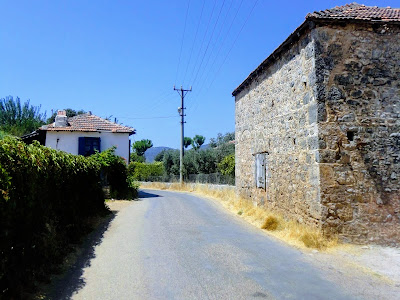 Kayaköy has a lovely little village centre, complete with everything a local villager could possibly need. There's a barber shop, convenience store with a Turkish pancake corner and also a restaurant across the road. The main roundabout centres around the main amenities of Kayaköy. To mix things up this year I took a walk from Muzzy's Place to the heart of the village, I wasn't climbing no hill! I did see the Levissi Wine Garden on my travels, I also stumbled upon the many quaint country lanes. Each part exuded the perfect measure of character and ancient Turkish charm. I have heard that horse-riding is something a lot of people do, keeping it 100% I really don't fancy my chances riding on a horse in my lifetime! Leaving the horse-riding to those who felt more confidence I thought back to the time before that we almost went horse-riding, that cancellation was a blessing in disguise! Yes, that's for sure K!

Tourism can be a help and a hindrance in the same breath. I suppose the village is quite large so even the largest coach-loads of tourists probably wouldn't completely disturb the calm too much? I do think! Responsible tourism is the key! During my time at Muzzy's Place, I didn't see an awful lot of people, just enough to be honest! Finally, I left Kayaköy with more timeless memories that will stay with me for a long time. There goes another relaxing and thought provoking trip that I will see in the future for sure! Maybe, just maybe? Concluding my 2013 Turkish holiday I looked to this deserted paradise with the date of my return flight back to Birmingham Airport looming. With a heavy heart tinged with a smile, its been a great four weeks in the sunshine of Turkey! Getting back to the Köy was amazing, for certain its a place that I won't ever be forgotten! Kaya's 'ghost village' always have something new to tell me! Kayaköy, I told you I am not afraid of ghosts! Yes, Kayaköy took me for a fool!