What's the deal with Istanbul? How can one city span two continents? I know Paris has the Eiffel Tower, but Istanbul proudly showcases the Hagia Sophia! Let’s keep things fair because like people, cities are all beautiful and individual in their own way. I realised that Beyoglu is the region of Istanbul to trust! Istanbul is always a city that leaves me wanting more! Şimdi git! Go! 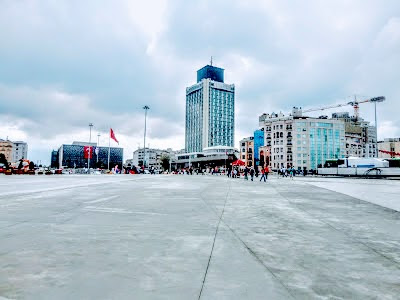 Hitting the ground and running, I landed at Istanbul Sabiha Gocken Airport with Pegasus Airlines. Time waits for no one; I took the Havatas bus from Sahiba Gocken to the heart of Taksim Square. Making my way through the electric Taksim Square, passing by Gezi Park all in pursuit of my hostel. Finding my hostel the Taksim Istanbul Apart, I dropped my belongings and took my sense of adventure to get back to this crazy, beautiful and vibrant city! Taksim Square doesn't play games, she means business! Istanbul showed me an edge that I loved, working her crazy vibe I embraced the madness of Turkey's cultural capital city. Had I already been to Istanbul, Turkey? Taksim Square is at the epicentre of all things that make this city cosmopolitan and real at the same time, it’s hard to explain but this square puts the cat amongst the pigeons! Taksim Square had me seeing truth! T, I was ready! Beyoglu wasn't going to wait!

Istanbul didn't need to take my hand because you have to experience this city with no fear! I saw some intriguing characters on my way over the water but hey I'm not that fancy, so Istanbul we're cool? Heading straight for the Bosporus Strait I wanted some delicious Turkish cooking, it had been a damn long day. Grabbing some dinner and catching a glimpse of the crimson sky slowly turning a darker shade I knew it was time to get some rest, but Istanbul is a city that doesn't sleep! I didn't really have a cemented plan but knew that I wanted to get stuck in good and proper! Istanbul's flow will get you stupid, she's got way more attitude than London! Pour it up with a cup of Turkish tea or Ayran, I don't get crazy when I'm on my travelling grind, respect that! I had left Fethiye for the weekend, no more seaside realness I wanted that Istanbul city life to keep pumping on! The backstreet hostel I chose had a up-front feel about it with real city people hustling their grind. Türkiye'yi çok seviyorum! 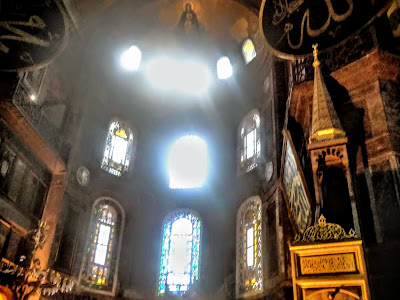 Away and ready to go, I was out and about after the call to prayer, I wasn't going to waste any time! The only way was Sultanahmet, this part of Istanbul held the key to a whole other world! I made my way to the Hagia Sophia, a testament to this city’s blend of Islam and Catholicism this once functioning place of worship acted as a Church and Mosque over the years. It was awe-inspiring to witness such a mix of patterns and stories housed in this fully working museum. Globalisation is always a handy development for I found a McDonald's to have a coffee before my Istanbul sightseeing could truly commence. Work! I'm not religious but I was in complete amazement at the Hagia Sophia. She's a masterpiece that Hagia Sophia, standing proud like a legendary queen! Respect Sultanahmet, its a part of town that served historical realness! I felt blessed to have another chance, another chance to love Istanbul all over again! Yes, Istanbul!

Istanbul never misses a beat, fresh from my sort of religious sejour at the Hagia Sophia I was looking for the glamourous side of Sultanahmet! Paying my coins I witnessed how the sultans of yesterday lived their blessed lives in the confines of the Top Kapi Palace. I doubt if those sultans ever popped champagne but the plush settings and picturesque gardens made up for the lack of fizz. It was crazy busy with foolish tourists, go home to your hotels, please! Blocking out the trash I was living for the jewels and treasures, I witnessed pure luxury in that moment of time! Tourists are not my friends, I however made the best of Top Kapi's opulence with care and respect, I'm a responsible tourist. As that scene looked more expensive I went back to the real world, well a soup kitchen by the Blue Mosque because I was starved! Turkey's cultural capital never lets me down, she was built to serve true greatness! 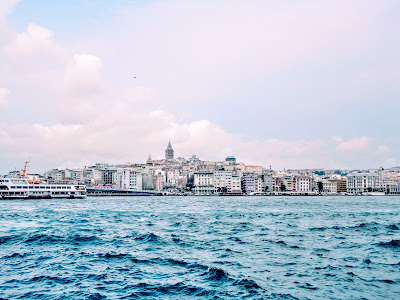 It was all about the Bosporus, within the show that's Istanbul this aspect is the starring role. In the distance to the right stands the Galata Tower, the Turkish answer to Rapunzel’s Tower. Reaching both sides of the Bosporus is only easy if you know how to cross it! This strait of water holds many tales that sets Istanbul apart from New York City's Manhattan Island and London's Thames River. The Galata Bridge connects Sultanahmet with neighbourhoods like Galatasaray and Beyoglu. Crossing the Galata Bridge was an experience in itself due to the sprawling path of interesting fish restaurants that tried their best to get me to taste their offerings. Reaching the Asian side of Istanbul meant a ferry boat trip over to Kadikoy, Asia. High Speed Rail will be the future for Istanbul with a tunnelled link that will ignite a new era for Turkey's railway system. Crossing the Galata Bridge always gives me life! Times are changing IST!

I wanted to see what all the fuss was about so I went to the Sirkeci Railway Station to see where the Orient Express once brought the inquisitive tourists from the past to experience the gateway city to Asia. Does it still? I chose to keep to the European side purely for ease and I wanted to see as much as I possible could within the short time I had gave myself in Istanbul. The waters of the Bosporus were lively during my August afternoon, confirming that I took the bridge to edge ever closer back to Taksim. My previous jaunt over the Galata Bridge was when I was probably fifteen years old, it was crazy to experience the non-stop pace of the concrete community of barbershops, fish restaurants and everything between all based upon one bridge. I got my haircut and I'm sure we stopped for something to eat then but don't quote me on that! Oh, when I said the water was lively I really meant to say 'rough!' There's no greater power than the power of Istanbul! She's formidable! 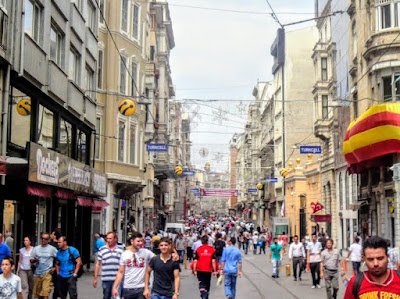 Istanbul does cosmopolitan, I remembered that this Eurasian city calls the shots! After crossing the Galata Bridge I found myself back in Beyoglu on Taksim Square's doorstep. Istiklal Caddesi serves a mash of shopping experiences, serving Turkish greatness and Topshop fashion stores. Istanbul might well be strong and crazy at times but she knows some of her gentlemen citizens are very easy on the eye, I did notice that courtesy call for certain! From Turkish Delights to another, Istiklal Caddesi is another reason Istanbul is a city that puts the cat amongst the pigeons! Taksim got crazy, I saw what was going on but didn't entertain that drama! It was getting a little bit heated, finding a little LGBT bar on the corner that lead to my accommodation gave me the place to wait it out. I always check Istiklal Caddesi out whenever I find myself in Istanbul! Istanbul's got my back! Hadi gidelim!

Turkish food was my fuel whilst in Istanbul but I got caught up with a KFC and a McDonald's breakfast so I was guilty! Those trams drive through the streets so watch your step! I never test Istanbul because that city is wise, I try to educate myself about the Ottoman Empire and experience opulence within an urban metropolis! Shade or not I would return to Istanbul in a quick second, it's a city that I respected and it showed me the way to see what I wanted and more. The Bosporus got me wilding for more, Istanbul caught my attention for a second time and I want more of that good stuff! Istanbul won't apology for anything, like a pulsing rhythm she can't control her hips! Istanbul's got this, she is the champion of champions! Gelecekte görüşürüz! Hızınızı koruyun Istanbul! Back to the beach!