August 2013: Somewhere Over The Mountain!

Fresh from my Istanbul adventure it was time to keep on moving, I wanted to relax for at least one day after my Istanbul trip before any shenanigans. I wasn't complaining about having a good time because I had saved some money from my trip. Getting on the drink, along with family it was time for us to spend two nights in Ovacık. Hisarönü was not ready for me and my cousin! 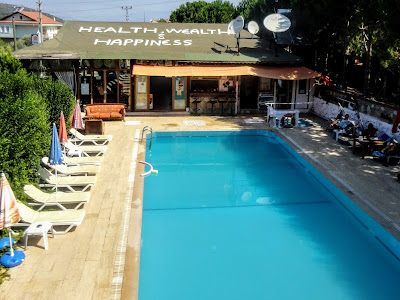 I was very confident that this whistle stop break would be very eventful to say the least! I don't do relaxing holidays! I know that there was something over the rainbow but those Turkish mountain resorts had a lot to answer for! Arriving bright and early at the Ernur Hotel in Ovacık, I was nursing a pretty bad hangover from the previous night, my cousin was there to terrorise me! I wanted to find my room as soon as possible, I did! Our hotel was simple and very clean, serving the purpose of our short stay. Securing a bargain is vital, it wasn't one of those trips to spend money on fancy accommodation.  Our room at the Ernur Hotel slept four people, complete with a sofa bed, with a clean and functional bathroom and kitchenette area. What a great deal at thirty pound per family! Staying in a villa is cool but I wanted some party time! That hangover was old, I knew better than that! Low key vibes were needed T.

Keeping things low key we stayed around the swimming pool for the remainder of the first day, this hangover issue happened to be a family affair! This holiday has panned out very different compared to how I thought it would have been originally. That mountain hideaway was just the right thing for me to mend my shameless hangover, I was on my summer holidays so I didn't give a damn! Our first evening saw us having a relaxed meal at Peking Chinese Restaurant in the nearby resort of Hisarönü. Having an early night would be on the cards for us, I knew that one or two drinks wouldn't break the bank, it was nice to feel normal after one or two drinks! I must admit that myself and my cousin ended the night with a cocktail or two, we knew that we would slip in some cheeky drinks because we were ready! Getting to bed early was the one, we needed clear heads for our Ölüdeniz beach day! The crazy city vibes of Istanbul felt like a million miles away, I was ready for a good drink! 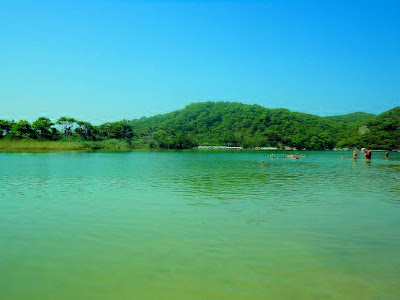 The beach was calling us all, we packed up our towels and sunscreen to enjoy a day at the beach! We settled for the the world famous Ölüdeniz Beach, we chose to stay around the bay on the private Şeker Beach Club to get the best of the sun and to escape the crowds. I had been to this part of Ölüdeniz beach before, my absence from Turkey had made this day really special. I wasn't up for sunbathing during my time at the beach for I wanted to laze in the cool blue waters rather than bronze my skin, such a difficult decision to make! The day was all about relaxing, to take it easy rather than milling about somewhere pointless in the boiling sun! It was a moment I had to get real, holidays don't last forever so mark my words I did my years worth of relaxing and enjoying myself that scorching day. Ölüdeniz Beach has world recognition as one of the world’s most beautiful beaches! Where's my drink at boo? I was thirsty for a cocktail!

I took some time to admire the sensational view, enjoying the waters for a short while to feel like I was a part of the Ölüdeniz vibe. Myself and my cousin Laura decided to start our own Happy Hour early because we had fully recovered from our lingering hangovers. I started on the Efes Beer because it was the cheapest drink whilst Laura sampled a Strawberry Mojito. Our afternoon at the beach was getting quite boozy, but who honestly gave a damn that we were getting suitably intoxicated?! Ölüdeniz Beach holds the trophy as an outstanding beach because from the air it wins it picture perfect looks, hopefully that doesn't burst your dreams?! If the truth be told I'm not really down for beaches because of the sand but the salt water is a natural skin cure. Don't get me wrong the beach was beautiful and the time spent together as a family was super as well but we had a plan to fully execute. A relaxing day was had by all, we even saw an African dance troupe! Laura, drink up! 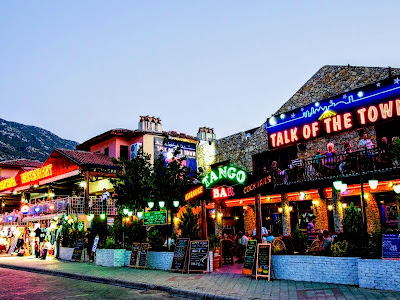 Hisarönü knew to expect us! Myself and Laura made our way into town to fill up our cup because we were ready for the night! I honestly did not know how we got ready for we were on a mad one! Ricochetting from the hotel entrance, past the pool on the way to our room, the other hotel guests could tell we were on the town that night! Dressed to kill, we made it to the bright lights of Hisarönü's main street. Allowing ourselves a little kebab, we remembered that eating is cheating! I loved being out and about, my time in Istanbul didn't permit a night out! All good things come to those who wait! Grabbing our first drinks at Barumba Karaoke Club seemed like the best thing to do, let's get those skittle bombs down! The bar wasn't really popping when we first got their but we got the party started! Laura jumped on the Karaoke first by singing Valerie by Amy Winehouse, she belted that song out really good! Let's get smashed!

Bumping into some friends we had made from the hotel was the signal to move on to the club! We drank a little more and danced some as the club got that little bit more poppin' and then some! Marrying the night we all made our way across the road to Revolution, a new addition to the Hisarönü club scene. The club that we called our last stop was crazy but clubbing code works differently for me in Turkey so I didn't appreciate that way of being! I'm not really sure of what happened next but must admit that the last chapter of our night was immense! Let me tell you something, we honestly were not ready for the hangover that would hit us the next morning! It was a great few days, something that rounded off my quick-paced Istanbul weekend. From the beach to our continual hangovers and reconnecting with Hisarönü, the budget hotel suited us fine! Who knows where the next chapter of this crazy and beautiful holiday will be like? Pour me another drink! Back to the villa! Drinks?