From D.C's presidents to Baltimore's row houses, with Boston's green commons, I will now pay these three three city's some mind! Getting inside Washington, D.C's White House wasn't going to happen, I had to be inventive during my presidential weekend trip. Baltimore put me in my place, that Maryland city served nothing but realness! Boston brought me something witchy! 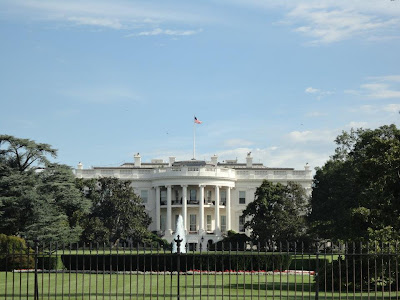 I sensed a healthy serving of Obamarama in the air as I found the White House, it was an exciting time for U.S politics. The upcoming elections would be happening around the time that I visited Washington, D.C in 2012. Escaping from the heat of New Jersey's humidity, I found D.C surprisingly calming. My Marriott Hotel used up my US Dollars but every cent was worth the location and quality for that weekend. Hitting the National Mall after a blessed sleep I embraced it all. Taking in the war memorials and monuments I found myself staring at the impressive white statue of a former president at the Lincoln Memorial. Hopping over to Georgetown I will leave that insert for the moment. The United States Capitol building had me looking at the familiar backdrop from the nightly national news broadcast by ITV in England. The spotlessly clean and white-washed fashion of National Mall had me far removed from Newark.

Catching the Potomac River after my visit to the Lincoln Memorial I saw a sign for a little place called Georgetown. By some kind of luck I found myself walking into a whole different area, away from those memorials I was impressed by those white picket fences. The housing situation in Georgetown looked expensive, the many kitsch eateries had my mouth watering, my budget was fine for a Five Guys. Fast forwarding to the next day, I had passed Ronald Reagan Washington National Airport to find out the airport was actually in the state of Virginia. Checking out of my Marriott Hotel I headed to the D.C Metro bound for the Pentagon, that was all top secret information. Going the waters edge in Alexandria, the road down to the opening of the Potomac River was filled with cute old fronted shops and cafes in VA. Getting back onto the Metro I checked out the Arlington County Cemetery, where JFK had been buried! Go! Seeking two states in one weekend was worth it. D.C & Virginia! 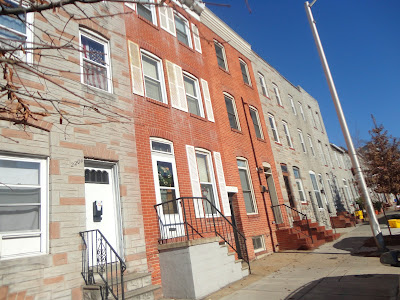 Baltimore came into my life so unexpectedly, remembering the views from Bolt Bus from Newark to Washington, D.C, a certain Maryland stop was made. Those Maryland streets gave me a sense of realness, I knew that I needed to make tracks down to Baltimore before I returned to England! Keeping to my word I took my Amtrak train from Newark Penn to Baltimore Penn, I said 'Good Morning, Baltimore!' Getting to know those Baltimore city streets I channeled 'Tracy Turnblad' as portrayed by 'Ricki Lake' in Hairspray. Finding the U.S.S Constellation docked at the Inner Harbor, an interesting ship that acted as the perfect contrast with the newer developed Harbor East riverside area. Taking my visit down to Baltimore in December 2012 meant that the winds bit, it was a cold but bright day in the same breath. I liked the Inner Harbor and East Harbor, if truth be told I really wanted to find some row house realness! Get it B!

Before I made my way over to Fells Point I asked a nice lady who was working at Barnes & Noble where I was going to find some realness, she suggested 'Eastern Ave'. Sidetracked by Fells Point, that restored cobbled stoned waterfront outpost impressed me much. The whole area looked very authentic with a 'New World' kind of colonial feel about it. Going for some lunch, I chose to have some Indian food, finding a cheaply priced buffet was the plan. With the day wearing on, I found myself back on 'Eastern Ave', the row houses impressed me much! I won't lie, I did feel some kind of crazy energy as I got my photos, sight seen it was time to move on! Hand on heart, I was lucky to see those row houses, the ones that I saw on the way to Washington, D.C were in a questionable state. On my way to the train station in order to take my bus back to Newark, I walked through some serious streets, Baltimore wasn't going to play any games! I loved Baltimore, it was straight to the point! 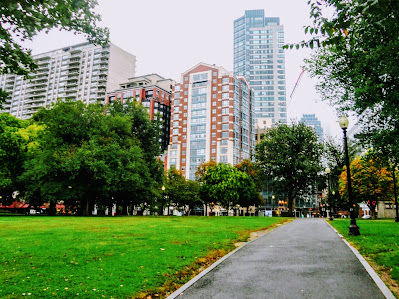 Before my trips cross border trips to Canada I hadn't ventured further north than Upstate New York, that needed to change fast! Splashing out on an Amtrak train ticket to Boston South Station from Newark Penn after one of my morning shifts had to be done, I wanted to make use of that September weekend! Checking into the Hostelling International dorm room had me hostel-going for the very first time! Back to the streets, between Chinatown and Essex Street those former factory like warehouse buildings served something extra, I was well and truly in Downtown Boston! Heading towards to Boston Common after the rain had to be done, I found myself feeling closer to home. That Mass moment had me imagining I was in London's Hyde Park, it was very homely for sure! Going walkabout I was lovely my first evening in Boston, going off the beaten track I found myself walking through a rather exclusive park side area B.

My first evening in Boston was chilled, I went to the AMC Boston Common 19 to see 'Hotel Transylvania'. Fresh from a wonderful sleep, I headed for the starting point of Boston's Freedom Trail. Not sure where the starting point was I made my own rules up, Faneuil Hall was on my list and yes I found that just fine. Heading over the river found the USS Constitution, sided into an interesting looking neighbourhood I found the Bunker Hill Monument. As the afternoon progressed I took the metro to find the famous Harvard University, passing the library told me I had made it. The student houses from outside reminded me of the movies, they really looked just they do! Getting the train towards Salem early the following morning had me brushing shoulders with the legendary location of the Salem witch trial. Walking a little bit too far, I found a pioneers village that took me back to the early days of the new American colony. Catching the coach in time, my Boston trip was ace!