Epcot, stands for 'Experimental Prototype Community of Tomorrow'. I do love Cinderella's Castle but Epcot is seriously something else! Walt Disney had a vision for the future, I have experienced this theme park from two perspectives. Why will this futuristic Walt Disney Park forever be my favourite place at Orlando's Walt Disney World Resort? Epcot put me to work! 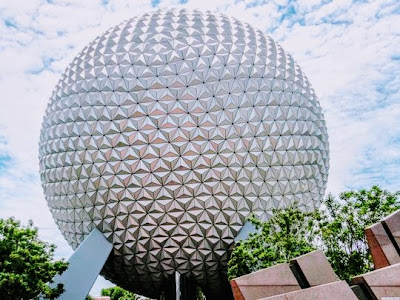 Epcot has forever been my favourite Disney park, for such reasons that I'll get right into. Accessing the main gates of Epcot is always fun, during my internship I always took the Epcot monorail from the (TTC) Ticket and Transportation Centre. Captured to the right is 'Spaceship Earth' encased in Epcot's most iconic feature like Magic Kingdom has 'Cinderella's Castle'. We all want to go back to the future, so I know that Epcot always sends me to another world! I've been on 'Spaceship Earth' countless times, I refer to this attraction as the 'giant golf ball'. Epcot brings the world to everybody's feet with the 'World Showcase!' Epcot has a different feeling compared with the other three main Walt Disney Parks in Orlando, Florida. The difference will be something that I can't get enough of, I want more from the Disney experience! No, I never imagined that Epcot would choose me, no! My first overseas job was magical beyond belief E!

In 2011, I had the opportunity to work at Epcot during my Walt Disney International College Program on a daily basis I was able to make magical moments underneath the 'Giant Golf Ball.' What more could I ask for?! I worked in the Merchandise department at Epcot's Future World North for three months. My duties ranged from distributing and cleaning strollers, working on the Glow Cart, making magical memories at three stores called Gateway Gifts, Camera Center and Gift Stop. Best of all my workplaces were underneath the magnificent 'giant golf ball'. I don't think I'll look at Epcot the same way again! I definitely won't! It wasn't all sparkle and magic but I merchantained my heart out and made friends for life! I know that my time as a Cast Member was truly magical! I will always feel truly blessed for my chance! I got to listen to my Spanish speaking colleagues and others who were from around the world. That corner of WDW Resort was our own world! Feel the WDW magic! 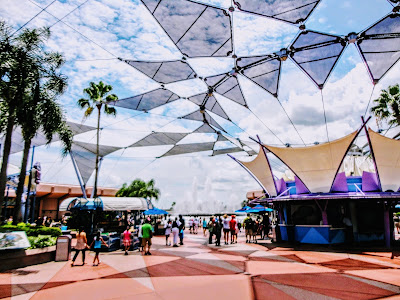 Future World East and West stands behind 'Spaceship Earth' opening a whole new world, each visit to this corner of Epcot is always unique. Too cool down for a moment I make a pit-stop at the 'Fountain View Ice Cream' parlour for the perfect ice cream treat. Mickey Mouse and his friends are so busy, but they are always waiting at 'Character Spot' for me. This corner of Epcot just makes me feel like I'm home! Playing in Epcot on my days off was always a pleasure, I would stop by my workplace before moving forward. Since my working days are now over I made my return to Epcot in January 2013 to play in the park with my fierce friends Zach and Dawin! Epcot, I might not work there anymore but Disney's Epcot hasn't seen the last of me! Where East meets West there's always somewhere to find a Disney favourite to meet and greet, I saw Chip and Dale do their thing close to the centre of this park. Yes M!

Getting a quick snack is easy because the 'Electric Umbrella' is a great place to grab a quick burger and a cup of soda, trust me I love it! The Seas with Nemo and Friends is a wonderful underwater like aquarium that centres around the motion picture Finding Nemo. This corner of Epcot holds the flagship MouseGear store, this monumental store has everything Disney to satisfy the most particular Disney Kid. I wasn't based in MouseGear but I made sure I had a look around once or twice to find the perfect Disney merchandise. Future World North, East and West Epcot has the best of three worlds! How did I get my job at Walt Disney World? I interviewed whilst I was in my first year at University College Birmingham in 2010, the interview was fun and I didn't stress about the process. Transition from a guest to a Cast Member gave me the opportunity to see the other side of the operation at Epcot, giving me an insight to see that Disney always does it better! Oh, Mickey Boy! Test who? Buckle up! 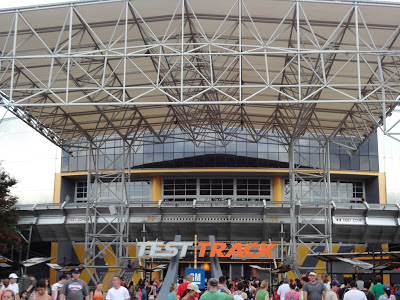 Let's get to the land! Epcot is one of the Disney Park that appeals to teenagers and adults, it's great to have magic in different ways. The Land is home to the majority of Epcot's main thrill rides, there is truly something for everyone! Captured to the right is Test Track, a crash test facility that doubles as an adrenaline experience that reaches speeds up to sixty-five mph! Let Test Track take you to the fast lane! I really ought to fasten my seat belt! I don't like to keep my feet on the ground all of the time so I love the Land for its sky-high attractions. Take off to new heights on Soarin' to realise that everything looks better from the top! I always waited patiently in the long queue to experience the thrill of Soarin' all over again. Keeping in with the flying theme with Mission: SPACE. I will be honest its scary being secured into the spaceship like compartment, prepare for the G-Force! Mission: SPACE is fast! Buckle up!

I'm not one to endorse fast passes so I won't! One thing that Disney does best is its lines and there's always a clear indication of how long I would be waiting in line for an attraction. Test Track is a ride I would wait a long time for because its one of Epcot's best thrill attractions by far! It's more of a teenage and adult crowd at Epcot, not completely but it doesn't exude the fairy-tale element that Magic Kingdom does so well. Epcot doesn't need sparkles and gumdrops because it's more of a thrill ride park with Mission: SPACE and Soarin' it attracts a different target market. As mentioned previously Spaceship Earth stands as Epcot's main focal point that stands near the entrance, defining the meaning of Epcot's futuristic past, present and future. The blueprint for Epcot does what it says on the tin, but does this Walt Disney World really reflect an Experimental Prototype Community of Tomorrow? Whatever Epcot means to you I will hold it high above with the Disney Parks! Epcot was my world! 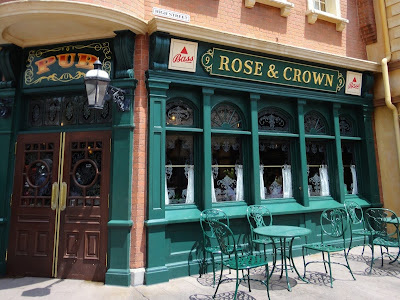 Did I see an English Pub? Epcot brought the world to my feet! The World Showcase brought eleven countries to life before my eyes, to the left is the Rose and Crown Pub in the United Kingdom. I found lots of home comforts such as fish 'n' chips at Epcot own English pub. Cadbury's chocolate and an ice cold pint of Stronger Cider can be found in the heart of humid Florida. Canada made an appearance, a small exhibit but non the less fantastic! I've never been to Paris but seeing France at the World Showcase painted the perfect picture for me. The French pavilion included a luxurious perfumery. The Kingdom of Morocco was brought to life in the middle of Florida in front of me. Japan's Mitsukoshi department store is a great place to revisit for a slice of Japanese cool, I was able to hold onto some Kawaii in the heart of the WDW Parks. During my internship I couldn't drink alcohol in the USA, I needed to return! Yes!

America appears in the World Showcase at Epcot as a colonial craze. Venetian luxury can be found in Italy at Epcot, its another place I need to try the cuisine! Germany is famous for its beer so its not difficult to find some sauerkraut and a pitcher of Bavarian lager to enjoy. China is super because I met Mulan the Chinese warrior princess. Norway serves a great pint of lager, so my last visit saw me enjoying an ice cold pint! Finally, Mexico took me back to my Epcot experience in January 2013 with some tasty enchiladas and strong margaritas to compliment my vacations. find a spot around the World Showcase when the sun goes down to be ready for the sky to light up! Seeing Illuminations: Reflections of the Earth is the perfect day at Epcot! There isn't anymore strollers for me to clean! You know that I left that shift one evening to me a special friend, oh yes I did! Epcot will always be my ultimate WDW Park, both for pleasure and for employment its been amazing!